On Oct. 2, women’s marches were held all across California. Los Angeles hosted the largest of those marches with thousands in attendance.

In an interview given at the march, Emiliana Guereca, president of Women’s March Foundation and founder of the Women’s March LA Foundation, which initiated the action here, said the movement has grown “into a really strong feminist movement for women, pro-choice …

“Unless all of us women rise up to this occasion, we are not going to be able to stop it. And, I think we’ve got the momentum and we’ve got to take to the streets and fight,” Guereca said.

At the rally, representatives from the Socialist Unity Party distributed a statement condemning the misogynistic, anti-working-class Texas abortion law. The SUP also made the point that the movement cannot depend on the Democratic Party, or politicians from either ruling class party, to sincerely or effectively fight this major attack against women.

Maggie Vascassenno, co-coordinator of the Socialist Unity Party in Los Angeles, said: “Many of the speakers made great points. But the fact that our literature was so greatly in demand showed a thirst for a more class-conscious perspective, going beyond the Democratic Party politicians.” 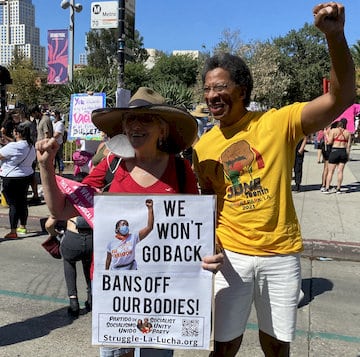