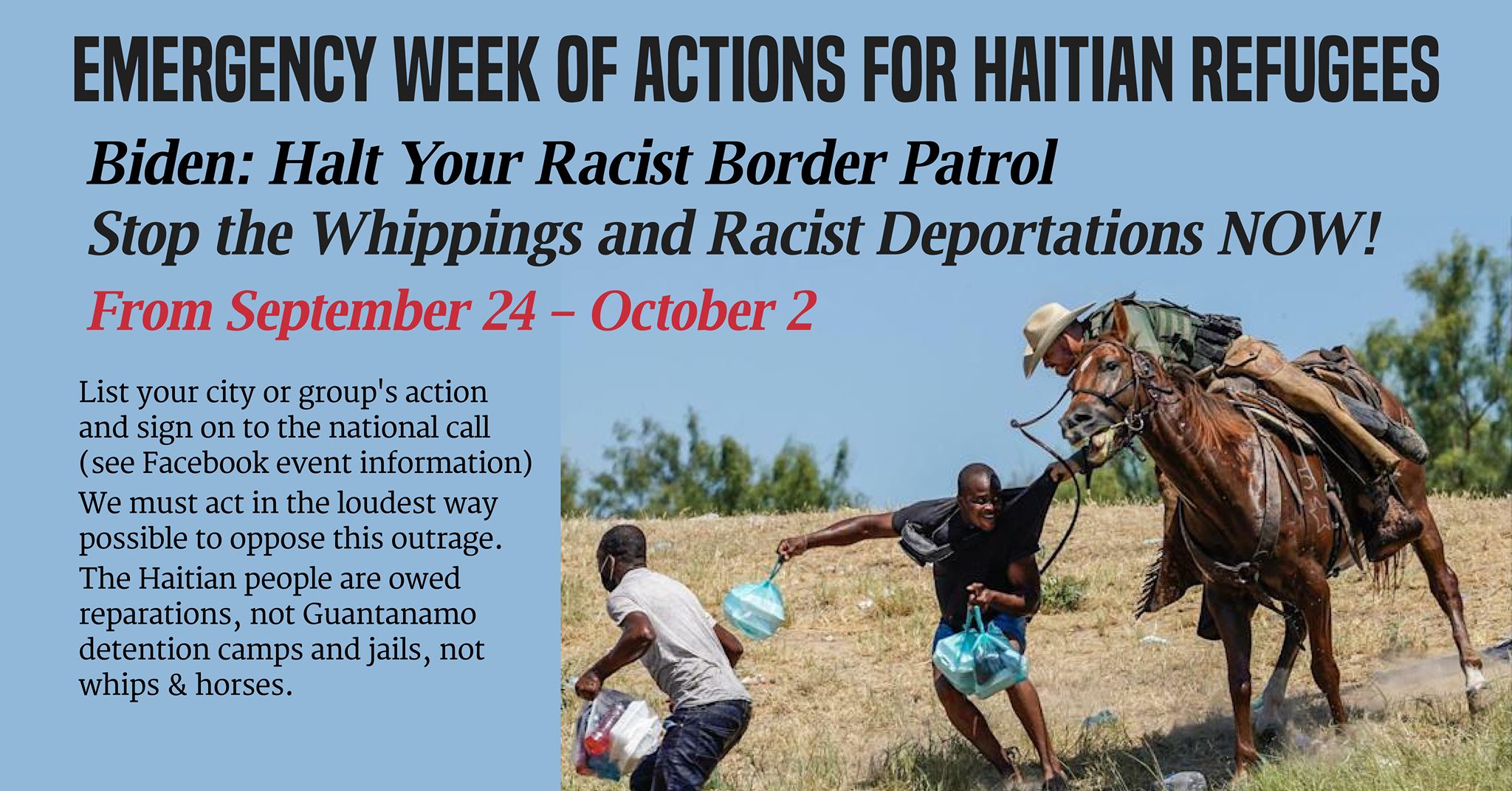 Progressive organizations and activists in solidarity with Haitian refugees will be holding protests around the country demanding the Biden Administration end state terror at the border and deportations. In Texas, refugees face life-threatening conditions and brutal racist terror by U.S. policies and Klan-like border patrol agents.
Add your endorsement / action here:
https://forms.gle/GGMuiujx6u4SDJX49
Under the direction of the Biden Administration, Border Patrol agents — as if playing in a movie scene from “Roots” or “12 Years A Slave,” and bringing to life some of the worst atrocities of the Antebellum South — have been caught on video whipping Haitian refugees while invoking Donald Trump’s words about their country being a “sh..hole country.”
You would think that this shocking display of white supremacy and criminal racism would bring at least a defensive reaction from the Biden Administration — but no serious condemnation, prosecution, nor firings have occurred.
President Biden and Vice President Kamala Harris maintain a deafening silence. This means that the horror the world has witnessed will continue, and possibly escalate, if no response is felt from the people of this country and the world condemning such actions.
To add insult to injury, we now learn that Biden plans to use the illegally occupied U.S. base at Guantanamo Bay, Cuba, for mass detention of Haitian refugees, just as George H.W. Bush administration did using the excuse of HIV health crisis.
What we’ve witnessed is part of the racist immigration policies from both the Democratic and Republican administrations. In this case it reflects the rarely used public health law, Title 42, enacted by former President Donald Trump. Trump attempted to use the law to justify his administration’s desire to end the basic international human right of seeking legal asylum under the cover of the pandemic.
Biden, who pledged a more humane immigration policy during his election campaign, is now fighting to keep the policy alive, also using the excuse of the pandemic, while many physicians and immigrant organizations have countered this argument. Creating safety protocols and vaccinations at the border would be far easier and cheaper than further militarizing the border and flying hundreds of refugees back to Haiti on a daily basis, which is being done today.
As with all refugees and migrants coming from the Americas to the U.S., they are escaping conditions in their countries created by the economic and militarized warfare of the U.S. — ensuring agricultural and political dominance to maintain the profits of multinational corporations here. And, in the case of Haiti, the colonial relationship of economic sabotage and denial of any real democratic process continues from 1915, when the first U.S. occupation and massacre of Haitians began, to today.
In fact, the Haitian refugees coming today are escaping the devastation of an earthquake in a country with little emergency safety and health infrastructure and political turmoil from a recent presidential assassination that, either indirectly or directly, resulted from U.S. influence.
The Haitian people have a proud history of helping to bring about an end to colonialism in Latin America with their military and political assistance to liberators like Simon Bolivar. After inspiring slaves all over the world in 1804 by defeating Napoleon and becoming the first successful slave revolution, Haiti’s first constitution was copied throughout Latin America as an example of democracy. The Haitian war of liberation against the French helped secure vital territory for the ruling class of the U.S. in the 1800s. So the Haitians are owed.
Instead of deportations and denial of their humanity, the U.S. should immediately end its violations of international human rights and end the selectively brutal racism in regards to people of African descent, including the treatment of Haitian people, with the denial of their history of great political and economic contributions to the Americas.
The signers demand:
-Immediate firing and prosecution of all those responsible for the whipping and hate speech used against Haitian refugees, witnessed by and documented in the videos of various news organizations, including Al Jazeera;
-Provide permanent shelter and health care, including access to COVID-19 vaccinations, to all arrivals at the border;
-Extend Temporary Protection Status indefinitely for those facing deportations;
-Provide asylum to all arrivals;
-End the use of Title 42 to deny humane immigration policies and its racist and selective use of justifying the denial for the majority of non-European peoples;
– Reparations not deportations!
Initial Endorsers:
Harriet Tubman Center for Social Justice – Los Angeles; Union del Barrio; Puerto Rican Alliance; United American Indians of New England; UPWARD; National Young Lords Organization; BAYAN-SoCal; AIM – SoCal; OCCUPY ICE – LA, Socialist Unity Party; Christopher Silvera, Secretary-Treasurer, Teamsters Local 808 -NY; Clarence Thomas, author, “Organizing In Our Own Name: Million Worker March”; Peoples Power Assembly – Baltimore; Moratorium Now – Detroit; MECAWI – Detroit; Wisconsin Bail Out the People Movement.
Add your endorsement / action here:
https://forms.gle/GGMuiujx6u4SDJX49