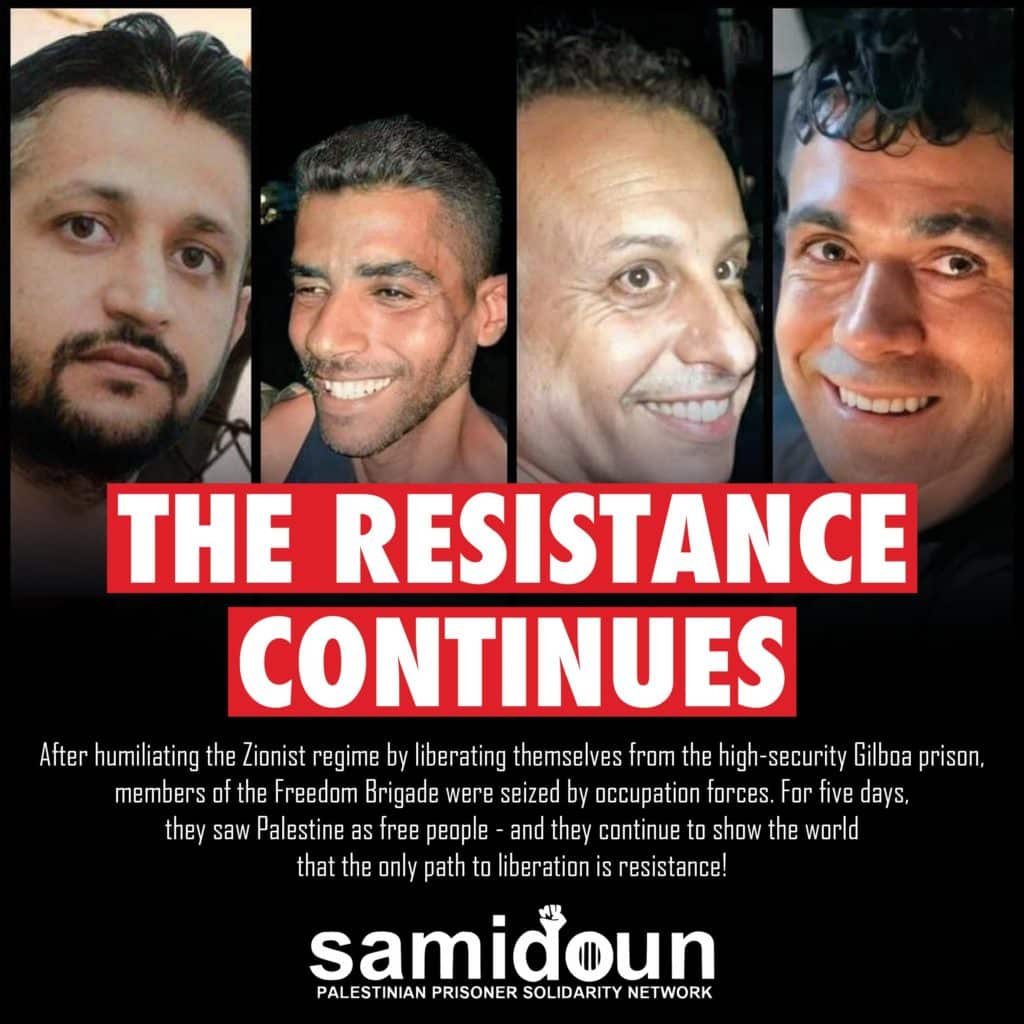 After humiliating the Zionist regime by liberating themselves from the high-security Gilboa prison, four members of the Freedom Brigade were seized by occupation forces. For five days, they saw Palestine as free people – and they continue to show the world that the only path to liberation is resistance. Meanwhile, Palestinian prisoners inside Israeli jails continue to struggle to resist colonial incarceration and repression.

In the early hours of Saturday, 11 September, occupation forces seized Mohammed Ardah and Zakaria Zubaidi, over five days after they liberated themselves from Gilboa Prison. Earlier that day, they seized Mahmoud Ardah and Yaqoub Qadri. Two liberated prisoners remain free, insisting on their freedom despite an ongoing manhunt by all levels of the Israeli occupation forces. Given the record of the Israeli occupation, we have every reason to believe that the four seized members of the Freedom Brigade will be subjected to severe torture and abuse in an attempt to garner information on the whereabouts of their liberated brothers.

The four are currently being held in the Jalameh interrogation center and are being denied access to their lawyers. Palestinian lawyer Khaled Mahajneh told Quds News that “the occupation intelligence is hiding all information about the prisoners who were arrested, and the court has imposed until now an order to prevent the four prisoners from meeting with their defense lawyers…We have not been able to obtain information about the prisoners’ conditions, nor about their health, physical or psychological state.” All of the Palestinian resistance organizations have issued stern warnings to the Israeli occupation against harming the four heroes of the Freedom Tunnel, while human rights organizations emphasized that the occupation holds full responsibility for their lives.

Palestinian prisoners in Israeli jails announced escalating steps of struggle to begin on Friday, 17 September, with groups of the prisoners’ movement leadership entering into hunger strikes, and prisoners collectively refusing to participate in roll call and counting and closing their sections. Over 400 Palestinians held in Gilboa prison have been transferred to other prisons, they have been denied access to the canteen or prison store and denied family and legal visits, all while being subjected to violent searches and attacks including military dogs. In response to these attacks, Palestinian prisoners resisted, burning cells in several prisons.

All of the Palestinian political organizations in the prisons formed an emergency committee to follow up on these steps of struggle, especially following a series of attacks on the prisoners, to end the restrictions on them and stop the ongoing violent invasions of Palestinian prisoners’ cells.

Organizers throughout Palestine and internationally are responding to the call for action from the prisoners, organizing actions and protests in Baqa’a al-Gharbiyeh, Nazareth, Ramallah, Jenin and elsewhere, as well as international solidarity actions in Paris, Frankfurt, Gothenburg, Derry, New York, Vancouver and elsewhere. Youth groups and Palestinian leaders and former prisoners such as Khader Adnan have called for general strikes in support of the prisoners.

The  liberated detainees of Gilboa prison represent the irrepressible hope of and commitment to liberation that no amount of militarized repression and Zionist colonization has suppressed, for over 73 years. The actions of this “Freedom Brigade” are not only a symbol of hope for Palestinians but also for everyone in the world who seeks justice and freedom. The rearrest of four liberated prisoners has done nothing to dim the light of liberation that they represent for humanity or to lessen the blow they have dealt to the mirage of Israeli invincibility and security control. They reflect the unbreakable Palestinian will to live, struggle and thrive in the most seemingly impossible circumstances.

Western imperialist governments are part and parcel of the ongoing attacks against Palestinian prisoners and the colonization of Palestine. From the U.S.’ over $3.8 billion annually in weaponry provided to the Israeli regime to the ongoing economic, political and diplomatic support provided by the European Union, Canada, the United Kingdom and others, all of these states are directly involved in the ongoing crimes perpetuated against the Palestinian people. Everywhere in the world, we can and must act now to stand with the heroes of the Freedom tunnel and all Palestinian prisoners struggling for justice, and for the liberation of Palestine!

Join us in action:

1. Demonstrations, rallies and street actions – including actions to boycott Israel!

Have a protest or action to free Palestinian prisoners, support the Palestinian struggle for liberation, stand with the Palestinian resistance and boycott Israel and its complicit corporations. Join the many protests taking place around the world — confront, isolate and besiege the Israeli embassy or consulate in your city or country of residence. Make it clear that the people are with Palestine and the liberated prisoners! Send us your events at samidoun@samidoun.net.

Creative actions are a wonderful way to spread the word and highlight the struggle of the Palestinian prisoners. The banner hung by Samidoun España in Madrid at the University metro station highlighted the struggle of Palestinian students, while the campaign to symbolically rename streets after Georges Abdallah internationally commemorated his birthday and amplified the demand for his liberation.

These actions only require one, two or a few people. You can even simply poster and sticker around your neighbourhood. Contact us via email at samidoun@samidoun.net or via WhatsApp at +32466904397 if you are looking for image ideas or resources!

The racist, settler colonial state of Israel and its war crimes against the Palestinian people are enabled and backed extensively by the over $3.8 billion each year given to Israel by the United States — targeted directly to support the Israeli occupation military killing children, women, men and elders throughout occupied Palestine. From Canada to Australia to the European Union, Western governments and imperialist powers provide ongoing diplomatic, political and economic support to Israel as well as selling billions of dollars of weaponry to the settler-colonial state. Meanwhile, they also purchase billions of dollars in weaponry from the Israeli state. Governments in league with imperialist powers, such as in the Philippines, Brazil, India and elsewhere, also buy weapons and “security” services — all “battle-tested” on the Palestinian population. Call your representatives, MPs, political officials and demand your government sanction Israel now, cut off all aid, expel its ambassadors, and stop buying and selling weapons!

Please note: Samidoun has speakers that can participate in your events (in-person and virtual) in Arabic, English, French, German, Dutch, Spanish and other languages. Contact us via email at samidoun@samidoun.net or via WhatsApp at +32466904397 to inquire about a Samidoun speaker!

Please contact us via email at samidoun@samidoun.net or via WhatsApp at +32466904397 or over social media to send us your events and actions!