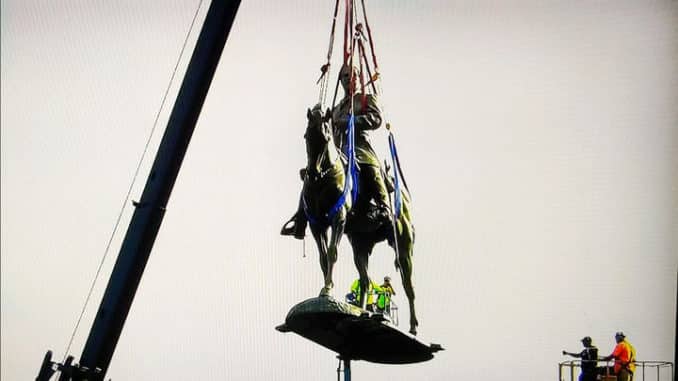 After 131 years of lording it over Richmond, Va., and much of the country, the towering statue of slavery-defending Confederate Gen. Robert E. Lee has finally been removed from his perch, to the cheers of a jubilant crowd pumped up by the Black worker who had just cut through the bolts holding the 21-foot statue to its 40-foot base.

The statue itself was cut into its original two pieces, loaded onto a truck and carted off to a state-owned facility for storage. (Fittingly, Richmond used a city sewer facility to accommodate the statues of Confederate President Jefferson Davis, Confederate generals Stonewall Jackson and J.E.B Stewart and Confederate Admiral Matthew Maury.

Despite sad attempts by local and state politicians to claim credit for this victory over a leading symbol of white supremacy, it is important to remember that it was a long, deliberate and growing movement of anti-racist, grassroots activists that finally forced the state of Virginia — which has owned the statue since its unveiling in 1890 — to agree to take it down.

Richmond’s Black community has always despised the statues honoring the slavery-defending traitors on Richmond’s famed Monument Avenue. Many people have spoken about how they deliberately avoided driving or walking down that high-end real estate boulevard because of the terrible feelings it evoked in them.

But, until very, very recently, Virginia’s state government has had no such feelings. Way back in 2007, the state spent $450,000 to try and clean the statue, in preparation for the wide range of activities marking the 200th anniversary of Lee’s birth. On the actual anniversary, Jan. 19, the Virginia State Conference NAACP and the Virginia Defenders held a press conference at the statue to denounce the state’s wasting money on a statue that can never be cleansed of its arrogant racism.

In 2015, the Defenders for Freedom, Justice & Equality led a community campaign to demand the organizers of the prestigious UCI World Championships bicycle race change the race’s course from Monument Avenue. Three of the race’s organizing committee co-chairmen responded to media inquiries about the demand. “This is our heritage. This is who we are,” said then-and-now-aspiring Gov. Terry McAuliff, a Democrat born in Syracuse, N.Y.

Two of the other three co-chairmen, then-Mayor Dwight Jones (Philadelphia) and U.S. Sen. Mark Warner (Indianapolis) made similar comments. Not responding to the demand was Thomas F. Farrell II, then the CEO of political powerhouse Dominion Energy, who in 2014 had produced the pro-Confederate movie “Field of Lost Shoes.”

The issue of honoring Confederate symbols came to the fore after a Confederate fan and white-supremacist murdered nine African-American churchgoers in Charleston, S.C., on June 17, 2015.

Then came the deadly confrontation between white supremacists and anti-racists in Charlottesville, Va., on Aug. 11 and 12, 2017, centered around the Lee statue in that university town.

Within weeks, neo-Confederate groups began coming to Richmond to “defend” the statues of Lee, Davis, Jackson, Stuart and Maury. And each time they showed up, local anti-racists, including the Defenders, were there to confront them.

Meanwhile, a statewide effort called Monumental Justice, initiated by Charlottesville activists, was demanding a change in the state law that forbade the removal of “war memorials,” as the Confederate statues were officially known.

Then came the horrific police murder of George Floyd in Minneapolis, an event that proved to be the tipping point in the long-smoldering mass rage over police abuse in the United States. Millions of people took to the streets in massive protests that lasted some 100 days. In Richmond, the movement formulated seven demands, which included taking down the Confederate monuments — which had been gloriously tagged on the second night of the protests during a march of thousands down Monument Avenue.

Later, the statue of Davis was torn down by protesters, along with a statue of Christopher Columbus and a statue dedicated to police officers, both in Byrd Park, named after one of Richmond’s earliest slave owners.

After a change that February in the state law allowing the removal of the statues, it was the mass and militant anti-racist protests that finally moved local officials to take down the city-owned statues on Monument Avenue. Lawsuits by pro-Confederates and Monument Avenue property owners and a resulting injunction delaying the removal of Lee were finally rejected just last week by the Virginia Supreme Court.

And so it came to pass that today, Sept. 8, 2021, a Black worker cut through the bolts holding Lee to his pedestal, and the statue finally came down.

It was back in 1890 that ”Fighting Editor” John Mitchell Jr. of the Richmond Planet wrote about the Lee statue going up, clearly explaining that it was meant to announce that the old white oligarchy was firmly back in charge and that Black folks had better accept that, or else.

Referring to the Black workers who actually did the manual labor of erecting the statue, Mitchell wrote, “He put up the Lee Monument, and should the time come, he’ll be there to take it down.”

Yes, it’s a symbolic change, but it represents a real shift in the balance of power between the white supremacists in state government and the growing mass movement against white supremacy. We must now seize this moment to strengthen and expand the ongoing struggles against evictions, gentrification, inadequate schools, poor housing, low-wage jobs — and the obscene military budget that drains our tax coffers of the money needed to address all these problems.

Further, the struggle to take down the Confederate monuments has always run parallel with the now-more-than-20-year struggle to reclaim and properly memorialize Richmond’s Shockoe Bottom district, once the epicenter of the U.S. domestic slave trade. That campaign is now at a critical juncture, with the City finally agreeing to the Defenders’ community-generated proposal for a Shockoe Bottom Memorial Park, but with questions remaining about how that development will concretely benefit the Black community.

The Steering Committee of the Virginia Defenders for Freedom, Justice & Equality