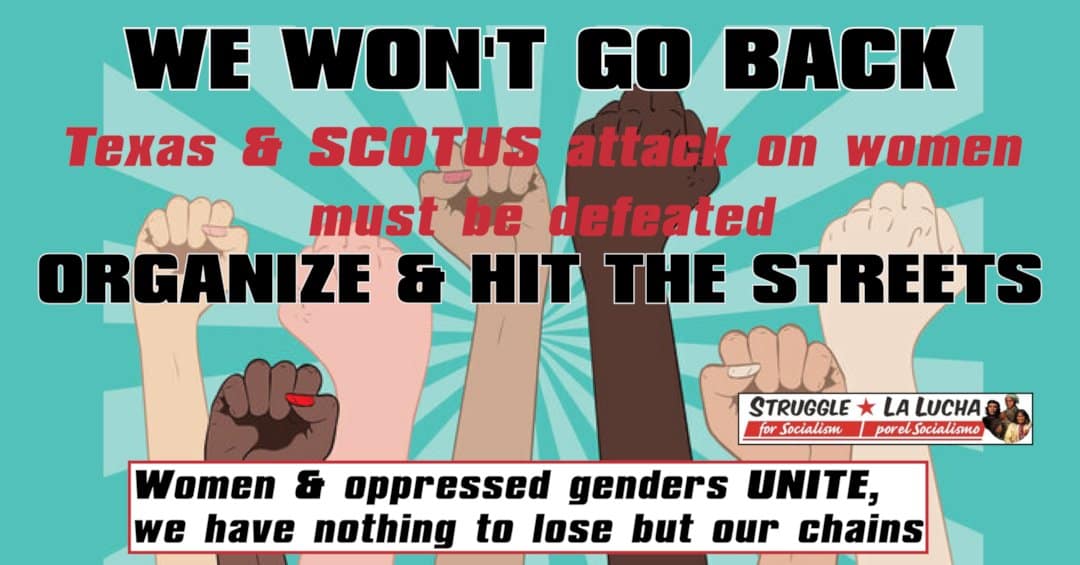 Texas Senate Bill 8, which took effect Sept. 1, bans abortion after six weeks, before many women are even aware that they are pregnant.

Anyone who sues an abortion provider under this law will be awarded a $10,000 bounty.  Texas Right to Life has already set up a “whistleblower” website where people can give anonymous tips about who might be violating the law.

In upholding SB8, the U.S. Supreme Court basically approved the notion that vigilantes can track down women and their “abettors.”

There are no exceptions for rape, incest or diagnoses of fetal anomaly.

Who will be most impacted?

It is Black, Brown and Indigenous women, the poor and youth, those who rely on reproductive rights centers for health care, including contraception, general checkups and cancer screenings. SB8 will effectively shut down care for transgender people, who will no longer be able to access needed hormone replacement therapy.

Many women will be forced to flee to other states just to obtain the basic right to control one’s own body.  But even this will not be possible for many poor, working-class and very young women who will be forced to risk their lives or health in back-alley abortions.

The same reactionary forces behind SB8, and those who did nothing to prevent it, care little about children and less about all women, regardless of who they love or their gender identity, including transgender women.

A box full of diapers and a car seat is of little help when families are facing joblessness and homelessness.  Where is the fight to stop unemployment benefits from being cut?  Where is the moratorium and cancellation of rents, foreclosures and utility shut-offs?

Where is the fight to stop forced sterilizations of poor and oppressed women from Puerto Rico to Mississippi, or the fight to make sure that all children — and every person — have free healthcare, or paid maternity leave for working families?

What about the lack of affordable, safe daycare that has forced women and parents of all genders out of the workplace?

The importance of Texas

Many reproductive-rights advocates have already pointed out that SB8 and the Supreme Court’s ruling will give impetus to similar measures in other states. This is certainly true.

But Texas itself is important.

It is the third-most populous state, after California and Florida. Twenty-nine million people are impacted. And SB8 is not the only right-wing bill that has swept the state.

Exactly 666 new reactionary laws went into effect Sept. 1.  It is now basically illegal to be homeless, as a statewide ban on homeless encampments precludes any locality from opting out and fines the homeless $500 (for being homeless).

Teachers are now forbidden to tell the truth about slavery. A new law provides funding for the so-called “1836 Project” that is set against the 1619 Project and projects a “patriotic education” about Texas’s racist “war of independence” from Mexico.

Cities with over 250,000 people will be punished for defunding police budgets, effectively giving the green light to police murders of Black, Brown and poor people.

And what about the basic right to vote that is still being denied to Black and Brown people?

Women in Argentina and all over Latin America, in Ireland, Poland and so many other countries, have shown the way by taking to the streets in the millions, forcing change.

We need a “green bandana” movement in the U.S. like the one in Latin America. We must organize to stop every reactionary, racist, sexist, homophobic, transphobic and anti-working class attack.

From capitalist climate change to racist police terror, from imperialist war to attacks on workers’ rights — we cannot wait for or depend on the Democratic Party.  What is needed is in-your-face, independent action to push the clock forward.

We need car caravans, people’s blockades and resistance to defend clinics. It’s time to march on Texas and the Supreme Court!

We will not go back!

Healthcare and childcare, maternity leave, food, work and shelter, along with the basic ability to control one’s body — all of these are basic human rights.

Im/migrant women, children and families need to be released from cages. So must the many women rotting behind bars in the colossal U.S. prison system.

Indigenous women and communites must be guaranteed the right to their land and an end to violence and murder.

Our children have the right to live on a planet that is not destroyed by capitalist climate change, imperialist war, occupation and sanctions.

We pledge ourselves to this fight so that all women and all workers, at home and abroad, can finally be free from capitalist and imperialist misery.

Women and oppressed genders unite and fight back! We have nothing to lose but our chains!