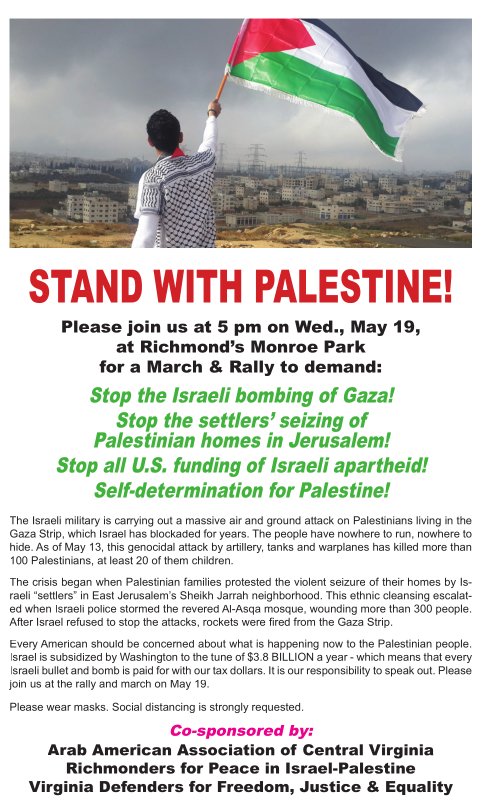 Please join us at 5 pm on Wednesday, May 19, at Richmond’s Monroe Park for a rally and march to demand:

• Stop the Israeli bombing of Gaza!
• Stop the settlers’ seizing of Palestinian homes in Jerusalem!
• Stop all U.S. funding of Israeli apartheid!
• Self-determination for Palestine!

The Israeli military is carrying out a massive air and ground attack on Palestinians living in the Gaza Strip, which Israel has blockaded for years. The people have nowhere to run, nowhere to hide. As of May 13, this genocidal attack by artillery, tanks and warplanes has killed more than 100 Palestinians, at least 20 of them children.

The crisis began when Palestinian families protested the violent seizure of their homes by Israeli “settlers” in East Jerusalem’s Sheikh Jarrah neighborhood. This ethnic cleansing escalated when Israeli police stormed the revered Al-Aqsa mosque, wounding more than 300 people. After Israel refused to stop the attacks, rockets were fired from the Gaza Strip.

Every American should be concerned about what is happening now to the Palestinian people. Israel is subsidized by Washington to the tune of $3.8 BILLION a year – which means that every Israeli bullet and bomb is paid for with our tax dollars. It is our responsibility to speak out. Please join us at the rally and march on May 19.

This protest is being co-sponsored by the Arab American Association of Central Virginia, Richmonders for Peace in Israel-Palestine and the Virginia Defenders for Freedom, Justice & Equality.