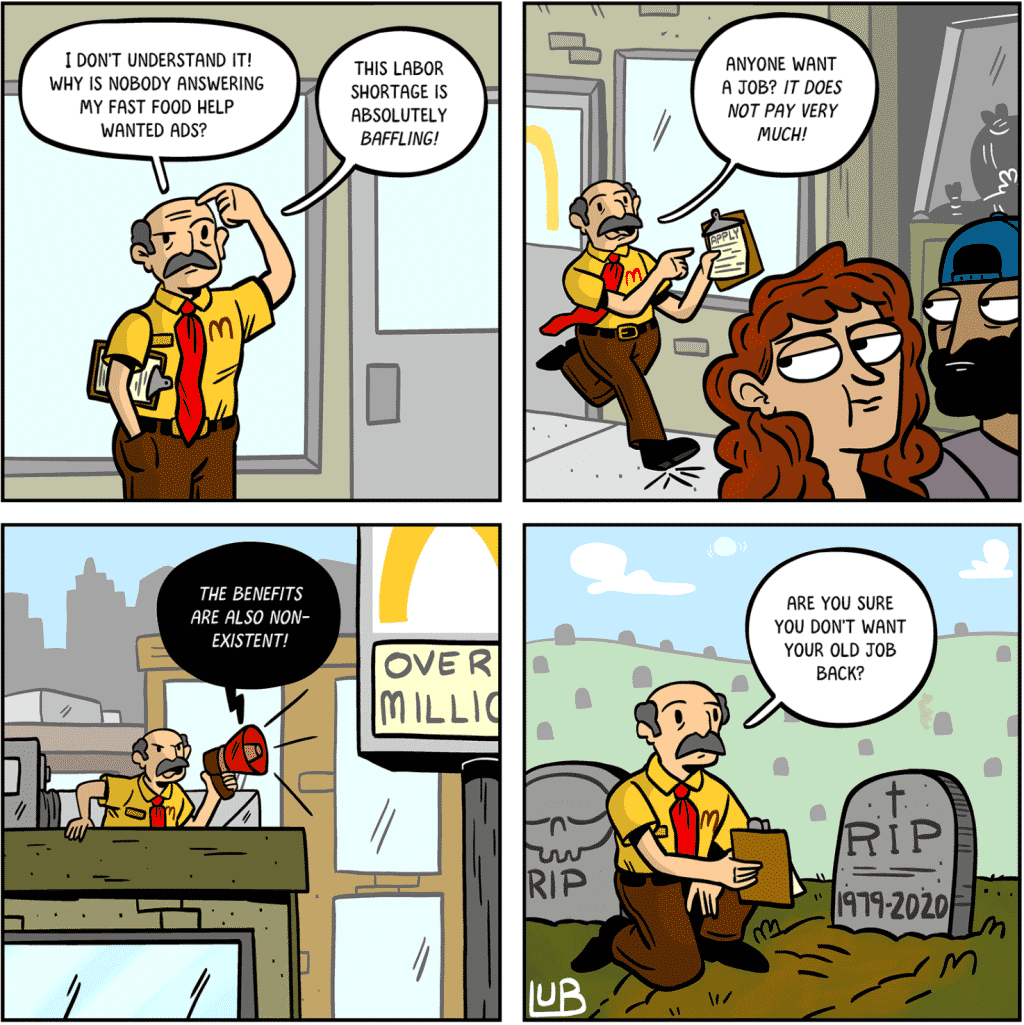 No matter how you look at it, the Labor Department’s April jobs report is miserable — unless you’re on Wall Street. The stock market hit record highs after the report was released. Business Insider reported, “Why the horrid April jobs report was actually great news for stocks.”

There were only 266,000 new jobs available in April across the whole United States, the government reported May 7, not the million or so that capitalist cheerleaders had forecast. The Labor Department’s official unemployment rate is now 6.1%. The Ludwig Institute for Shared Economic Prosperity says the true rate in March was 24.7%.

Joblessness remains rampant. The Labor Department says that the number of people working is still down 8.2 million from what it was before the pandemic in February 2020. Right now more than 16 million workers are collecting jobless aid — a number that’s far higher than the roughly 2 million a year ago, before the pandemic.

Even if you accept the nervous claims that April was an aberration (see for example John Cassidy’s New Yorker article “Don’t Panic Over One Weaker-Than-Expected Jobs Report”), job growth has averaged only 524,000 a month for the last three months.

Women have taken the brunt

The jobs report shows that even more women have dropped out of the labor force, primarily because schools continue to be closed and there is no childcare available.

The report showed a bleak outlook for women, who have taken a disproportionate hit from the pandemic’s economic devastation. According to the National Women’s Law Center, 165,000 women who are at least 20 years old dropped out of the labor force from March to April.

“If you added all of the women who’ve dropped out of the labor force since February 2020, the unemployment rate for women would be 8.1%,” Jasmine Tucker, the director of research at the NWLC, said.

Unemployment is much higher than pre-pandemic levels for Black and Latina women. The NWLC estimates that it’ll take women 28 months to reach their pre-pandemic employment levels. That’d be the summer of 2023.

What’s required is accessible and affordable childcare. Lack of childcare is hampering people’s ability to get back to work.

Black workers are now earning 70 percent as much as their white counterparts, the largest wage gap since the pandemic began and six percentage points higher than at the turn of the century, according to LISEP.

Soon after the Labor Department released its April jobs report, the U.S. Chamber of Congress blamed the weak employment growth on the existence of a $300 weekly supplemental jobless benefit and began urging lawmakers to eliminate the federally enhanced unemployment payments that were extended through early September.

If $300 a week is preventing employers from hiring low-wage workers, the answer is to raise wages and pay benefits, and make the jobs safe.

That seems obvious. And some economists say that the federal enhanced unemployment payments along with the other stimulus payments in the CARES Act are the reason for record wealth growth in the billionaire class. The richest 500 people on the planet added $1.8 trillion to their combined wealth in 2020, accumulating a total net worth of $7.6 trillion, according to the Bloomberg Billionaires Index.

Why not raise wages?

So it might seem like the capitalist class would favor the stimulus and extended unemployment benefits. And they’ve gotten so much richer. So why not raise wages?

From the standpoint of the capitalist, the mass unemployment created by the COVID-19 pandemic provided a unique opportunity for employers to lower wages and increase the rate of surplus value, which they call profit.

Workers are resisting the wage cuts — the low wage jobs now being offered. At the most basic level, workers are generally opposed to returning to work until they are fully vaccinated and their children can be safely back in school and daycare full time.

A Pew Research Center survey this year found that 66% of the unemployed had “seriously considered” changing their field of work, a far greater percentage than during the Great Recession. People who used to work in restaurants or hotels are finding better paying jobs in warehouses or as delivery drivers, for example. Or they want a job that is more stable and less likely to be exposed to the coronavirus.

Consider that grocery stores laid off over 49,000 workers in April and nursing care facilities tossed out nearly 20,000. Kroger has been closing stores to avoid local laws mandating “hero pay” of $5-an-hour for workers in the essential grocery stores who face hazardous exposure while on the job.

“The problem is we are not making enough money to make it worth it to go back to these jobs that are difficult and dirty and usually thankless. You’re getting yelled at and disrespected all day. It’s hell,” Sara Wojtala, who is 31, told the Washington Post. She added that with two young kids, finding child care has also been a huge issue lately.

“Cooks, who are overwhelmingly Latino, made up the highest excess mortality rate of any profession last year — and people wonder why workers would think twice before returning to these jobs?” Assemblywoman Lorena Gonzalez told the San Diego Union-Tribune.

There is really no mystery to this. Good wages, full benefits, safe workplaces and respect — all that would add up to ending the near-depression level unemployment crisis.

So why is there a problem? The problem is that the bosses are not interested in starting just any economy. They are interested only in starting the capitalist economy. And there is the block.

“The real barrier to capitalist production,” says Karl Marx, “is capital itself.” Capital means production for profit and not for use. Lowering wages and cutting benefits maximizes profit.

It would be easy to get the economy moving, to get everyone back to work, if the economy were transformed into a system of production for use. The existing framework is fully capable of starting up and engaging everyone in useful productive labor.

The block, however, is production for profit, not for use. That’s the ultimate problem.