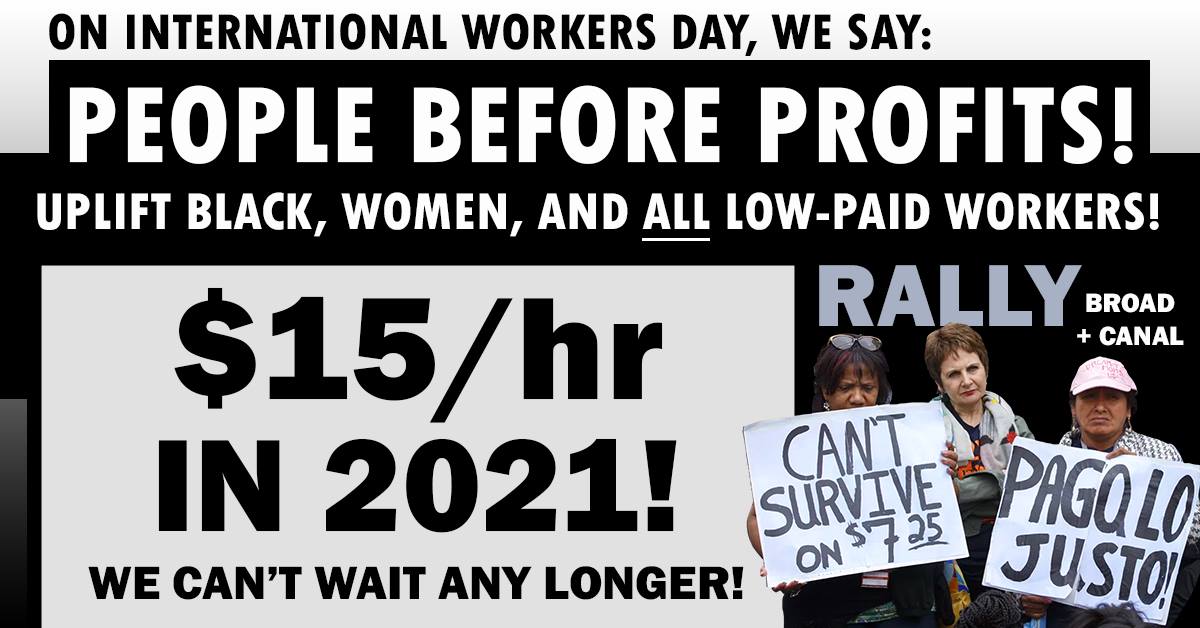 The COVID crisis has increased poverty and inequality and the lowest paid can’t put food on the table, repair hurricane damaged homes or find housing. The demand for higher wages is critical to survival and the fight to win it will not be stopped, even as the millionaire Democrats cave in and the millionaire Republicans block any raise at all. Biden’s pitiful proposal waits until 2026 for $15 an hour. $15 by 2026.

We also demand an end to the sub minimum youth and disabled wages, the tipped sub minimum wage and to ensure all workers, including incarcerated workers, get $15 an hour.

State by state, people have fought to raise the minimum wage for years. Some states have won $15 an hour, most others have raised it some amount. Louisiana state legislators on the other hand are committed to maintaining poverty wages. These racist bootlickers for corporations have blocked every effort to raise the minimum wage. Their pockets are stuffed with funds from billionaire industry groups and their flunky lobbyists from the American Legislative Exchange Council or the Louisiana Restaurant Association. Their campaign chests bulge with bribes as they vote to cut their own taxes. They personally get paid millions to work directly for a tiny handful of rich country clubbers.

In Florida, people voted overwhelmingly in a statewide election to raise the minimum wage to $15 an hour. Most states allow statewide referendums. In Louisiana, the corrupt state legislature has blocked the right of the people to directly put an issue on the ballot. We are dictated to by politicians who hate workers, spew racist hatred, lies, threats, and work to divide us— all in order to keep a tiny group of Louisiana billionaires in their mansions. This tiny clique thinks they can get away with it, too. But they don’t stand a chance against the power of the people, united in a fight for our long overdue rights.

May 1, May Day, began in the U.S. when workers fought for an 8-hour day. This May Day, we honor the tens of thousands of fast food workers—many youth of color—home healthcare, garage workers and more who in 2012 boldly began the fight for $15 an hour and a union. Join us this May Day to push the struggle forward.

We will meet at Broad and Canal where nearby many fast food, grocery store workers and others are paid minimum wage or barely above.
You, your organization, union, neighbors, and coworkers are invited to join the organizing and be in the fight.
Reach out to LouisianaWorkersCouncils@gmail.com or call us at 504-671-7853 to get involved!