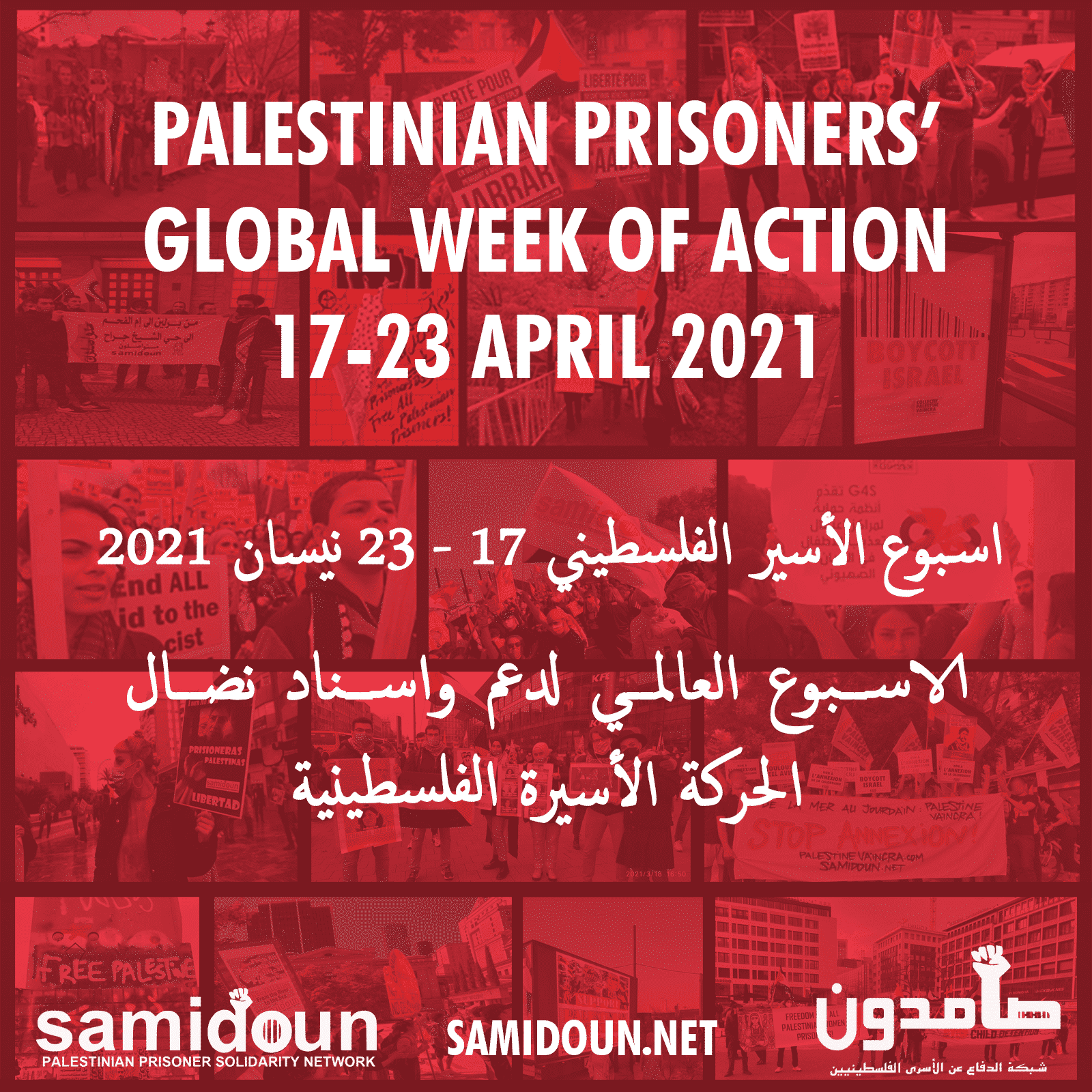 The Call for Liberation and Steadfastness

This is the call of the prisoners of freedom in the prisons of Zionist colonialism, the first line of the Palestinian resistance in occupied Palestine. The prisoners and detainees are a revolutionary corps engaged in the struggle on the front lines, every day, every hour, minute, and second, confronting with their bodies and their voices the Israeli brutality and Zionist crimes that are fully supported by the United States and its imperialist allies.

We, with our comrades in Samidoun Palestinian Prisoner Solidarity Network inside and outside occupied Palestine, carry the message of the prisoners’ movement inside the Israeli occupation prisons, and call upon you to participate and join with us in organizing a week of popular and solidarity activities, campaigns, actions and movements in support of the Palestinian prisoners and their just struggle for freedom and liberation. We call upon you to expose the daily Zionist crimes to which they are constantly subjected, including the policies of repression, isolation, collective punishment and deprivation practiced by the prison administration against them.

These systematic policies include the denial of family visits, denial of visits and communication with lawyers, isolation and solitary confinement, collective punishment, torture, administrative detention without charge or trial, violent raids of prisoners’ rooms, confiscation of books, and the continued detention of children and ill patients, a situation that has been intensified in light of the COVID-19 pandemic and the threat it poses to the lives of all Palestinian prisoners and detainees in Israeli prisons.

At the same time, the Palestinian people in occupied Jerusalem are continuing their popular struggle and steadfastness, confronting the bulldozers of the occupation and the policy of comprehensive ethnic cleansing, uprooting and systematic dispossession of the Palestinian people. This is an official, declared Zionist policy taking place before the eyes of the world since 1947 that has not ceased for one day. Entire Arab residential neigbourhoods are being targeted for displacement, as is the case in Sheikh Jarrah, Silwan, Suhafat, Issawiya, and the neighborhoods and areas of the Palestinian people throughout occupied Jerusalem. At the same time, the occupation forces continue their policy of repression, persecution and arbitrary arrests throughout occupied Jerusalem. Hardly a day passes without violent nighttime arrests and raids that target women, men, students, workers and even children.

It is clear that the policy of arrests practiced by the Zionist colonial authority targets the Palestinian people throughout occupied Palestine, in the West Bank, Jerusalem, and occupied Palestine ’48, and in the besieged Gaza Strip, where aggression, siege and arrests target even fishermen and farmers in Gaza. This reality confirms that the Zionist occupation has encroached upon our entire Palestinian land, from the river to the sea, and targets our entire Palestinian people, every man, woman, youth, elder and child throughout our occupied homeland. And that is why our Palestinian people, inside occupied Palestine and in exile and diaspora, stand firmly with the struggling prisoners’ movement that fights and sacrifices for their rights, because it is a true national leadership that reflects the essence and goal of the Palestinian struggle and the meanings and values of resistance, liberation, equality, self-sacrifice and dedication.

Confronting the silence and inaction of the so-called “international community,” which is well-aware of these facts and the documented details of the crimes committed against our Palestinian people and their liberation movement, and in light of the unprecedented levels of oppression and Israeli occupation crimes, and the collusion of institutions and reactionary states in the region and beyond in seeking normalization and alliance with Israel, we make this global appeal to our friends and comrades, the democratic forces and free people of the world everywhere, to be part of this freedom struggle waged by the Palestinian people and to stand with the spearhead of Palestinian resistance, the struggling prisoners’ movement, confronting imperialism, racism and reactionary forces and their proxies in occupied Palestine and throughout the region.

We carry to you today the message of the prisoners struggling inside the prisons of the Zionist occupation. We extend our salutes to all of the activists, strugglers and freedom fighters detained in the prisons of the world. We stand with their just and legitimate struggles to achieve their goals and salute their sacrifices. We remind ourselves and the world of the suffering of our fellow political prisoners in the prisons of Turkey, Saudi Arabia, Bahrain, Egypt, Greece, the Philippines, Colombia, the United States and elsewhere, and we call for support for their resistance and liberation This week of solidarity with our Palestinian prisoners is also a week of solidarity with every prisoner fighting for liberation, social justice and victory over the systems of oppression, exploitation and persecution wherever they are.

On this day, we send our deepest greetings of steadfastness and honour to comrade Georges Ibrahim Abdallah in French prisons. He is an exceptional revolutionary figure, one of the symbols of our resistance and a leader of the Palestinian prisoners’ movement. We also demand the liberation of all political detainees in US prisons, including the veteran leaders of the Black Panther movement, and we affirm the depth of the relationship of joint struggle between our Palestinian people and the Black Liberation Movement in the United States. The distance between us does not undermine the realities of our joint struggle, shared goals and common enemy.

The Palestinian Prisoners’ Week between 17-23 April 2021 must be a global occasion for joint struggle confronting colonialism, racism, Zionism, exploitation and imperialism, for a better world, a humane society and an alternative directed by the values of solidarity, collective good and popular liberation.

Long live the Palestinian people’s struggle for liberation and return!

Long live the struggle of the Palestinian prisoners’ movement!

From the river to the sea, Palestine will be free!

Please join us in taking action of the Week of Struggle! Your local actions are incredibly important in building the movement that is so necessary for the cause. With the COVID-19 pandemic, many people have been forced to organize indoors and online. We encourage activists and organizers to consider public, outdoor actions that you can take that are safe, creative and mobilizing, as well as letter-writing campaigns to support the prisoners. Here are a few action items. Please share yours with us at samidoun@samidoun.net.

1. Demonstrations, rallies and street actions – including actions to boycott Israel!

Have a protest or action to free Palestinian prisoners, support the Palestinian struggle for liberation, stand with the Palestinian resistance and boycott Israel and its complicit corporations. There are many different kinds of actions that you can take that are safe while still getting out on the streets – check out the Stand Palestine organized by Collectif Palestine Vaincra in Toulouse, France; or the outdoor informational gatherings in Aachen and Dusseldorf, Germany, organized by Samidoun Deutschland for Land Day and the Free Palestinian Students campaign. With Ramadan approaching, it’s important to highlight the campaign to boycott Israeli dates in particular! Include he Palestinian prisoners in your campaign against the agriculture of apartheid.

You can also check out the civil disobedience actions organized against Elbit, the arms manufacturer, by Palestine Action in the UK for direct actions targeting the apartheid war machine.

– part of the #FreePalestinianStudents campaign.

In addition, Samidoun Palestine is in touch directly with the families of Palestinian prisoners. Take photos of your letters and send them to us via email at samidoun@samidoun.net or via WhatsApp at +32466904397. You can even send us a voice note to broadcast on the radio stations transmitted to the prisoners. Letter writing actions can be held in person (even outdoors) or virtually/remotely over any meeting solution.

Creative actions are a wonderful way to spread the word and highlight the struggle of the Palestinian prisoners – even when you are engaging in physical distancing and health precautions. The banner hung by Samidoun España in Madrid at the University metro station highlighted the struggle of Palestinian students, while the campaign to symbolically rename streets after Georges Abdallah internationally commemorated his birthday and amplified the demand for his liberation.

These actions only require one, two or a few people. You can even simply poster and sticker around your neighbourhood. Contact us via email at samidoun@samidoun.net or via WhatsApp at +32466904397 if you are looking for image ideas or resources!

We still have plenty to share with each other via online events and webinars, which can enable us to connect easily and freely across borders and barriers. Host a webinar or event — or a cultural gathering with poetry and music — highlighting the struggle of Palestinian prisoners.

Please note: Samidoun has speakers that can participate in your webinars in Arabic, English, French, German, Dutch, Spanish and other languages. Contact us via email at samidoun@samidoun.net or via WhatsApp at +32466904397 to inquire about a Samidoun speaker!