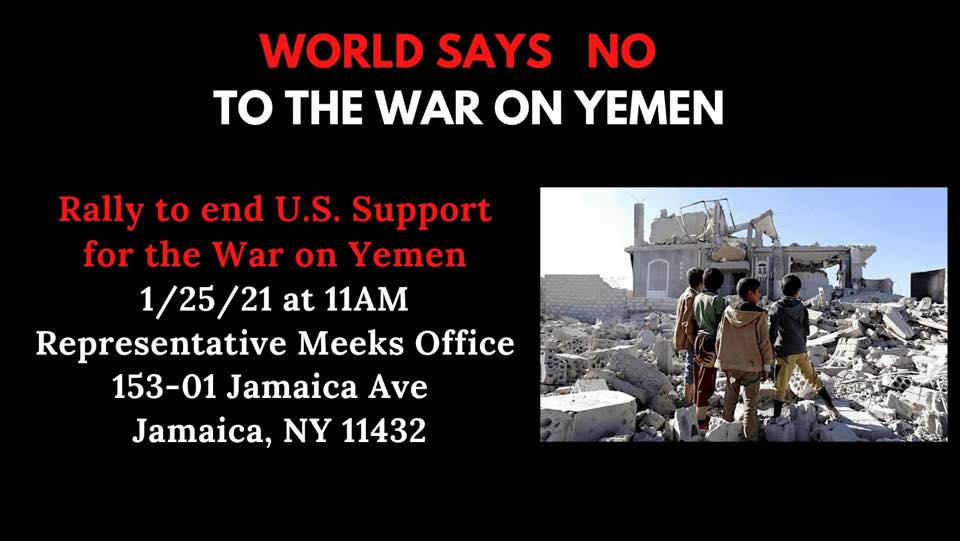 The war is only possible because Western countries — and the United States and Britain in particular — continue to arm Saudi Arabia and provide military, political and logistical support for the war.

The disaster in Yemen is man-made. It is caused by the war and blockade. It can be ended.

Over 115 organizations from the US, UK, Yemen, Australia, Bangladesh, Canada, Chile, France, Germany, India, Italy, Poland, Spain, Switzerland, and across the world, are coming together to call for an end to the war in Yemen and solidarity with the people of Yemen. We demand that right now our governments:

*Stop foreign aggression on Yemen
*Stop weapons and war support for Saudi Arabia and the United Arab Emirates
*Lift the blockade on Yemen and open all land and seaports
*Restore and expand humanitarian aid for the people of Yemen.

We call on New Yorkers to join our rally against the war on January 25, 2021, just days after the U.S. presidential inauguration and the day before Saudi Arabia’s “Davos in the Desert” Future Investment Initiative.

We are rallying at Gregory Meeks office. Representative Gregory Meeks has called for ending U.S. support for the war in the past. Now, as the newly-appointed head of the House Foreign Affairs Committee, we are asking Representative Meeks to take a leading role in seeing an end to all U.S. involvement in the conflict.

We ask that the representative Gregory Meeks:

-Co-sponsor and fast track the existing War Powers Resolution that calls for an end to U.S. support for the Saudi led coalition which include political, material and logistical support and ban weapons sales to Saudi Arabia and the United Arab Emirates.

-Introduce or fast track legislation restoring and expanding humanitarian aid for the people of Yemen.

-Pledge to reverse the decision by the Trump administration to designate Ansar Allah (also known as Houthis) as a “terrorist organization”. Designating the Houthis as terrorists by the US State Department will make an already catastrophic humanitarian crisis even worse by endangering aid activities and prohibit interacting with the Houthi government inside of Yemen which is critical to reach a negotiated settlement to end the war.