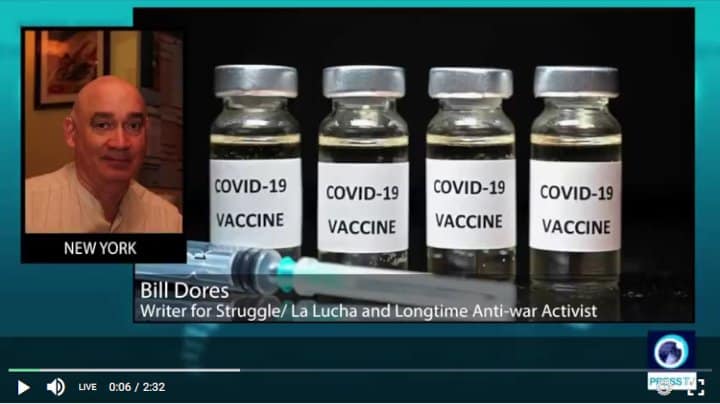 The United States is waging the medical warfare on the entire world, a system of medical apartheid, an American political analyst has said.

Bill Dores, a writer for Struggle-La Lucha and longtime antiwar activist, made the remarks in an interview with Press TV on Tuesday while commenting on the concerns raised in the U.S. media following the death of a “healthy” doctor two weeks after getting a first dose of a Pfizer COVID-19 vaccine.

Dr. Gregory Michael, a Miami-Beach 56-year-old obstetrician, was in good health. Health officials from Florida and the Centers from Disease Control and Prevention (CDC) are investigating whether the vaccine played a role in his death, which possibly is the country’s first death linked to the vaccine.

“In a few days, we will be marking the birthday of Dr. Martin Luther King Jr., who was murdered by the U.S. state apparatus. Dr. King famously said, ‘Of all the forms of inequality, injustice in health is the most shocking and the most inhuman because it often results in physical death,’” said Dores.

“At the time he was speaking about the racist healthcare system inside the United States, but it also applies to the medical warfare United States is waging to the entire world, a system of medical apartheid, of technological apartheid they are trying to impose on humanity,” he added.

“I am not a medical expert or scientist. I cannot speak on the effectiveness of different vaccines, but I know that everything the U.S. does is designed for corporate profits and to keep U.S. corporations at the center of the world economy, no matter the cost,” he said.

“And the cost of this politics of destruction is borne by the people of the entire world, including in the United States, where more people will be dead in a year than died in World War Two for this country,” he noted.

“In this health crisis for humanity, we should have global cooperation, not sanctions and economic warfare. The sanctions on Iran, as Dr. Morandi has pointed out, are medical mass murder. While the United States tries to impose its vaccine on the world, they cannot provide anywhere near enough for the people right here. The death rate here in the supposedly wealthy country is also terrible,” he stated.

“Why should people here not be able to access vaccines and treatments developed in other countries? Much of the world including Iran, China, Cuba, and Venezuela are cooperating, working together to try to develop a vaccine. Why should the United States not be joining in as an international effort instead of trying to impose its medical financial domination on the world? The sanctions on Iran and all other countries should end now,” he said.

“This is a time for international medical cooperation, not economic warfare. There are many people here in the United States who would still be alive if we’ve been able to access some of the treatments available in Cuba and other countries,” the analyst concluded.