November is Native American Heritage Month. It should not be lost on anyone that 97 percent of the Navajo Nation in Nevada voted against Donald Trump. That fact should be recognized as we get closer to the National Day of Mourning (the so-called Thanksgiving holiday) and pay homage to the Indigenous people’s struggle.

There is little doubt that the more than 77 million people who voted against Trump, for the most part, saw their vote as a referendum against racism and all the forms of reactionary bigotry that Trump had unleashed during his presidency. It was a repudiation of the far-right and fascist groups that Trump had stoked, from the killings of immigrants in El Paso, Texas, to support of the tiki torch Nazi sympathizers in Charlottesville, Va.

What’s more remarkable is that this took place under one of the most anti-democratic forms of bourgeois democracy in the world — a system based on the Electoral College, which was created to supersede the popular vote and give power to the slavocracy in the Southern U.S. states, and which remains in place today.

Millions of people cannot vote at all. This includes people jailed and languishing in the U.S. mass incarceration system; people who previously served time in prison; over 12 million undocumented immigrant workers; many seniors and Black and Brown people who were disenfranchised and unable to vote because of threats and physical barriers; and youth between 16 and 18. (In socialist Cuba, all youth are eligible to vote when they turn 16.)

In addition, you can add the billions of working and poor people around the world whose lives are impacted daily by brutal U.S. sanctions, whose children die of malnutrition because of imperialist economic theft or directly from Pentagon drones and bombs, who should have some kind of say over who heads the most criminal imperialist empire.

Shouldn’t the world’s youth be heard on how to solve the climate crisis and the burning of the planet, instead of the U.S. billionaires and bankers who head a global system of exploitation?

To sum it up, as told by one worker to another:

“When I was a union rep, the company appointed an especially abusive manager. She discriminated on job assignments and told workers they couldn’t speak Spanish on the job. We filed a lot of grievances, had some slowdowns, and she got fired. The whole shop celebrated.

“No one thought we wouldn’t be exploited anymore, that there would be no more layoffs and cutbacks and abuse, that the new boss would be on our side. And maybe some higher-ups didn’t like her either, because they thought she was hurting productivity. But it was a victory that gave the workers more confidence to fight. It strengthened the union. It’s kind of like that.”

As Russian revolutionary leader V.I. Lenin explained, elections are a kind of barometer of the mood of the people, even though they incline in a conservative direction in the service of the class that rules. After all, the capitalist state, including its elections, belongs to the billionaire ruling class. 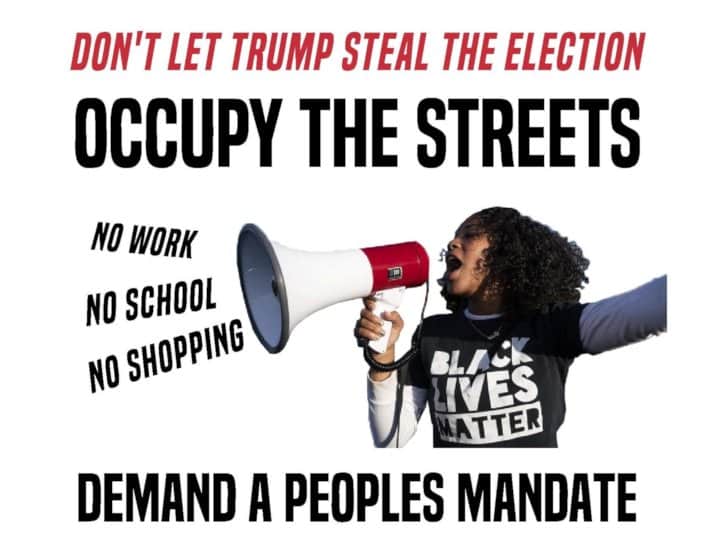 Is the battle with Trump over?

It would be wise for the working class to “keep our powder dry.”

On Nov. 9, Trump fired Defense Secretary Mark Esper and several other high-ranking Pentagon officials. Esper had clashed with Trump over the use of military troops in dealing with protests.  His replacement, Christopher C. Miller, is a former Army Green Beret who served as the top counterterrorism policy official in the National Security Council in the Trump White House.

Then, on Nov. 11, the Pentagon confirmed that retired Army Col. Douglas Macgregor will become the senior advisor to Acting Secretary of Defense Miller. Macgregor once called for the use of lethal force against undocumented immigrants and is credited with a litany of racist comments.

In addition, on Nov. 14, Trump supporters have called for a rally at Washington, D.C.’s Freedom Plaza called the “Million MAGA March.” It’s sponsored by Stop the Steal — one of the pro-Trump groups trying to overturn the election results. The white supremacist Proud Boys have announced their intention to mobilize for this rally.

There is no need to go over all of the different scenarios that could attempt to reverse the election or create chaos in the period between now and Inauguration Day on January 20, 2021. Our readers are all too aware. What is most important is that we remain vigilant.

The question remains: Will those interests of the imperialist bourgeoisie, such as the fracking and oil industries, which have grown desperate as a result of capitalist overproduction and subsequent contraction (that is, a glut in oil and gas), attempt to launch a military attack or provocation against Iran?

The possibility of a “November-December surprise” is real. Trump’s secretary of state, Mike Pompeo, who bragged of a “smooth transition to a second Trump administration,” plans to impose a “flood” of new sanctions against Iran in the coming weeks.

There is a small but vocal sector of the movement that is oblivious to Trump’s pro-war and imperialist actions, convinced despite all evidence to the contrary that he is, in some way, shape or form, an anti-interventionist.

It would be important to remind them that during Trump’s administration, the U.S. military dropped “the Mother of All Bombs” (the closest you can come to a nuclear bomb) on Afghanistan; illegally assassinated Gen. Qassim Suleimani, Iran’s beloved and respected leader of the Revolutionary Guards’ Quds Force, along with Iraqi paramilitary leader Abu Mahdi Muhandis, in what can only be seen as an attempt to provoke war with Iran; unilaterally declared Jerusalem the capital of Israel; escalated support for the brutal Saudi war on Yemen; attempted to overthrow President Nicolás Maduro and the rightful government of Venezuela; participated in the Bolivian coup against President Evo Morales; deepened the blockade against Cuba; and more.

This does not include the devastating impact of draconian sanctions during the COVID-19 pandemic, which has left children starving and multiplied the death rate in targeted countries.  Sanctions are indeed war!

What’s more disconcerting is the inability of some in the movement to understand that class forces drive policies as much or more than individual leaders. We have no doubt that while policies may change here or there — and that “here and there” may be very important — that Biden will be just as deeply invested in the anti-China campaign launched by Trump, regardless of its form, as it is U.S. imperialist interests that in the end determine what his administration will do.

Just because a neoliberal form of capitalism is a criminal system does not mean that a fascist-leaning regime is against war — both are ultimately driven by the needs of imperialism to expand or die.

Perhaps the most important lesson is that we as the working class can and should act in our own interests through mass action, whether in the form of an uprising, general strikes, or massive protest and resistance, to challenge imperialism.

Which way forward for the working class?

At the moment, it may appear to be more likely that the Trump movement will sputter out or be forced to recede, as the dominant capitalist interests seem more intent on proceeding with a Biden presidency. But it is important to keep our eyes and ears open, as this period remains unstable for the capitalist system.

The millions of workers who voted for Biden also have a right to know about and intervene in whatever behind-the-scenes deals and compromises are being forged with the right wing in this period of transition. It is important to call for full transparency so that there are no illusions about the kind of battle that has to be prepared.

We should consider mobilizations on Jan. 20 and keep the idea of a workers’ general strike alive in the event of any crisis that would threaten to leave Trump in office and further embolden the white supremacist far right.

A more accurate picture is to look at the “employment to population ratio.” According to the Bureau of Labor Statistics, as of October only 57.4 percent of the population of working age had a job.

Regardless of who prevails, it will be important to continue to demand a “People’s Mandate,” including an end to police terror against Black and Brown people, community control of the police, jobs or income for the unemployed, safe working conditions, free quality health care for all, no evictions or utility shutoffs, shutting down ICE and freeing detained migrants, etc.

As Struggle-La Lucha’s Gary Wilson explained: “The defeat of Trump, however, does not defeat racism or the ideology of white supremacy. The police have not been abolished. A battle was won, but the war continues.”