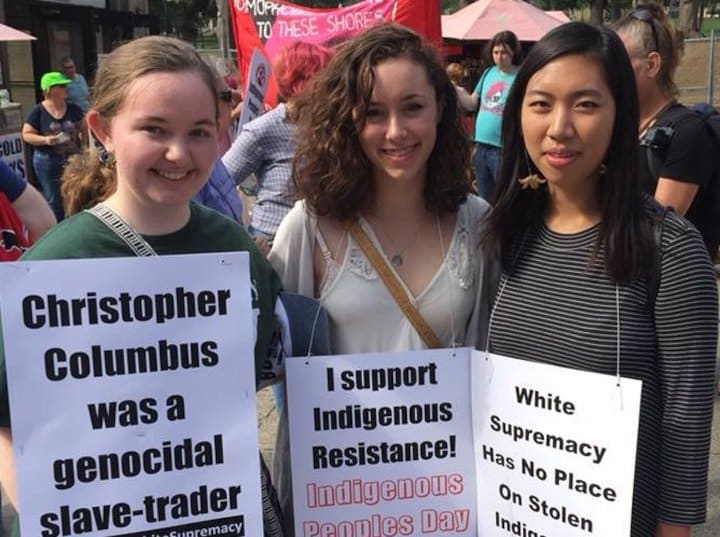 Struggle-La Lucha: Kisha, can you tell us a little about your background? How did you become an activist?

Kisha James: I am an enrolled member of the Wampanoag Tribe of Gayhead Aquinnah and Oglala Lakota. Both of my parents are activists, so it seems natural to me that I would also be one, and I spent much of my youth attending demonstrations and political meetings.

However, I first started becoming politically active as a reaction to the neoliberal school environments I found myself in, the blind patriotism and pro-war fervor that characterized the political climate of the early 2000s, and the writings of Lenin (beginning in high school).

In terms of activism, I started small. I organized a group of my fellow kindergarteners to refuse to stand for the Pledge of Allegiance after explaining (in the language of young children) that the U.S. flag represented (to me) the theft of Native lands, the genocide of my ancestors and the deaths of millions of people in the name of U.S. imperialism. Needless to say, this got me into a lot of trouble, and I was told that I was “indoctrinating” my fellow classmates, as if the Pledge of Allegiance is not itself a form of indoctrination.

Other notable incidents from my childhood that I consider politically formative include my brother being physically dragged out of a pro-war assembly for shouting “Bring the troops home now!” when he was 6, being sent to the principal’s office for refusing to vote in a mock election in first grade (even then I knew that bourgeois elections were not the be-all and end-all), being forced to sing a song honoring Columbus in kindergarten, being told I could not write a short story about the Israeli occupation of Palestine in fourth grade (I went ahead and wrote it anyway), and getting my school to recognize Indigenous Peoples Day instead of Columbus Day in middle school.

In terms of formal political activism and organizing, I first began in high school by assisting with the statewide Indigenous Peoples Day campaign in Massachusetts, as well as helping to organize the National Day Of Mourning, an anti-Thanksgiving protest that was founded by my grandfather, and which has been happening annually since 1970.

SLL: You’re the president of the Wellesley College Native American Student Association (NASA), which has recently been in the news for protesting the administration’s decision to have only white professors teach Indigenous Studies. Can you tell us about that struggle and your experience as a Native person at the college?

KJ: Wellesley College has never been a good place for Indigenous people, but it has gotten worse this past year in my opinion. Sometimes, it feels like Wellesley is slowly draining the life out of me and the other Native students by placing immense burdens on our shoulders.

Wellesley College has zero Indigenous professors, and Native students make up less than 1 percent of the student body, according to NASA’s calculations. We decided enough was enough and published a demand letter. In it, we expound upon the microaggressions, racism and anti-Indigenous rhetoric we face on campus.

So far, several of our demands on the student-life side have been met, but the other demands have not. Recent events have made it clear that the college is going to rally behind the white anthropology professors because Wellesley College, as a settler-colonial institution, is ultimately committed to protecting whiteness and silencing Native voices.

Wellesley’s response has been overwhelmingly disappointing on many fronts, but I am hopeful that the senior administration will do the right thing and fulfill our demands.

SLL: Does NASA work with other BIPOC [Black, Indigenous and People of Color] student groups and other activists at the college around Black Lives Matter and other issues?

KJ: NASA has several allied organizations on campus, including Wellesley 4 Black Students, which published an incredible demand letter that was the catalyst for our demand letter, as well as Students for Justice in Palestine, Wellesley Against Mass Incarceration, a handful of environmental organizations, the Wellesley Leftist Student Union and several other cultural organizations.

NASA, Wellesley 4 Black Students and Students for Justice in Palestine recently held a virtual sit-in, and we published a joint demand letter. We demanded, among other things, the abolition of campus police and complete divestment from the fossil fuel industry, Israel and the prison-industrial complex.

The racism we have faced has been intense. We have been accused of being cannibals and savages by the right-wing Italian Americans who idolize Columbus. They have denied our genocide, argued that the genocide of Indigenous people was a good thing, asserted that Columbus was a “good person,” and muddled and falsified historical fact.

Some of them have physically attacked the Indigenous people working on the campaign. I myself have been grabbed and pushed by them. One even accused a Native American woman of putting a “curse” on him when she spoke her Native language in his presence. In short, the treatment of Indigenous people at the hands of these racists has been nothing short of disgusting.

Whenever we encounter these reactionary and racist people, I’m reminded of the lyric, “Please get out of the new world if you can’t lend a hand,” from Bob Dylan’s “The Times They Are A-Changin.” The people who support Columbus Day have chosen to live and die on the wrong side of history, and that is their choice. However, there are also many people who have changed their opinion on Columbus after reading his diary and the writings of Bartolomé de las Casas, and we have many allies, including a wonderful organization called “Italian Americans for Indigenous Peoples Day.”

The Oct. 10 event was extremely powerful, and we had a large turnout. We started with a rally in Boston Common before marching to Faneuil Hall to meet up with members of the movement to rename it. Peter Faneuil was a slave trader and owner, and slaves were sold at Faneuil Hall. It was a very powerful show of solidarity.

There was an amazing Taíno and Afro-Brazilian contingent as well, and there was a particularly powerful moment where a Taíno woman climbed onto the pedestal where the Columbus statue used to stand.

SLL: Protesters have forced down a lot of racist statues in different cities this year. The much-hated Christopher Columbus statue in Boston was beheaded, and, in October, Mayor Marty Walsh finally said it was going to be removed. Can you tell us how that happened?

KJ: Indigenous people have been demanding the removal of that statue for many years. When the statue was beheaded in June, my mom, who represents United American Indians of New England and Indigenous Peoples Day MA, as well as Raquel Halsey, executive director of the North American Indian Center of Boston, and Jean-Luc Pierite, president of the Board of Directors of NAICOB, held a press conference in front of the beheaded statue, where they called for its complete removal. It was at this press conference that we were physically attacked by a group of Columbus supporters.

Shortly afterward, it was announced that the statue would be restored. This was unsurprising to us because Mayor Walsh has always genuflected before whiteness, so we had suspected that there would be some sort of backroom deal with Columbus supporters. Mayor Walsh’s office refused to meet with Indigenous people, so we went to the Boston Art Commission, which had recently voted to remove the Emancipation monument from public display because of its demeaning portrayal of a Black man.

After tireless campaigning on the part of Indigenous people, including my mom, Mayor Walsh finally announced that the statue would be removed.

SLL: The COVID-19 pandemic has been devastating for many Indigenous communities because of the U.S. government’s refusal to provide the necessary resources for health care. How will this affect the annual National Day of Mourning event?

KJ: National Day of Mourning will partially be in person, with a group of us convening at Cole’s Hill like we have done every year since 1970. It will be livestreamed, and there will be additional online content with messages from representatives of many Indigenous struggles all around the globe.

SLL: How can folks get involved and help out with Indigenous Peoples Day in Massachusetts and United American Indians of New England?

KJ: Join the United American Indians of New England Facebook group for more information about the National Day of Mourning and daily content about Native struggles and news. And go to IndigenousPeoplesDayMA.org to learn more about the state wide IPD efforts. It’s also important for non-Native people to support Indigenous nations where they live.