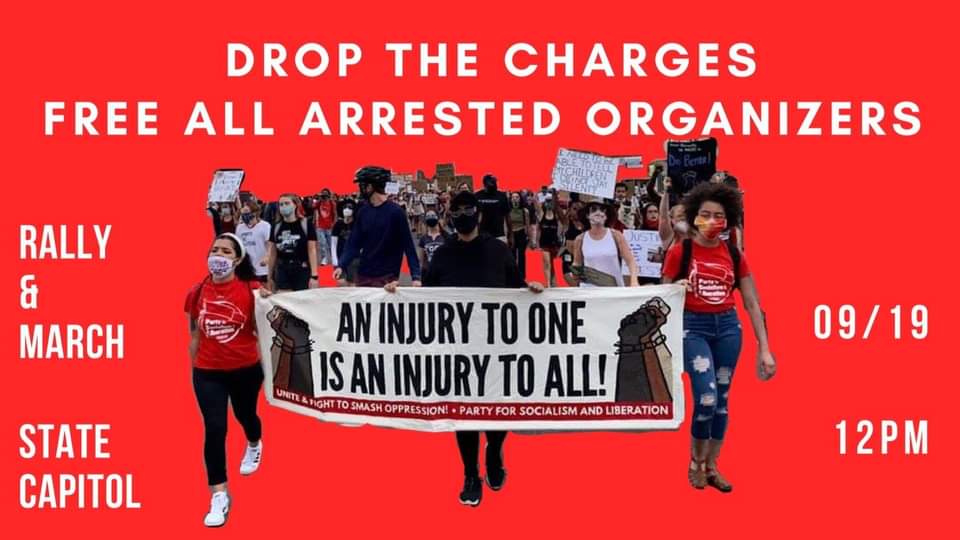 On Thursday, September 17, police agencies in the Denver area arrested anti-war organizers in a coordinated assault. Those arrested included leaders in the struggle demanding justice for Elijah McClain, who was brutally murdered by the Aurora Police Department. They are still in jail, with the exception of one person. They are facing multiple felony charges and years in prison in an obvious frame-up aimed at stopping the movement for justice for Elijah McClain.

Russell Ruch was arrested while in a parking lot at a Home Depot. An hour later, five police cars surrounded and arrested Lillian House while she was driving. In the afternoon, S.W.A.T. teams arrived at Joel Northam’s home and arrested him. Eliza Lucero was also arrested. All four are members of the Party for Socialism and Liberation. Also arrested were Terrance Roberts, co-founder of the Frontline Party for Revolutionary Action, and others may have also been arrested.

They are facing multiple serious felony charges and many misdemeanors including the bizarre and ludicrous charge of “kidnapping,” all because they have organized large Black Lives Matter protests. This is a major political attack on the whole movement and the PSL. We will mount a mass campaign to defeat these phony charges and win their freedom. This attack on the Denver anti-racist movement and the PSL is part of a concerted national assault on the Black Lives Matter movement, an attack driven directly from the White House, from Governor’s mansions, and from local police chiefs and police departments around the country.

We will not be afraid! We have the power of the people on our side! Stand up, fight back!

Join us for a rally and march beginning at the west steps of the State Capitol building in Denver at noon on Saturday, September 19.