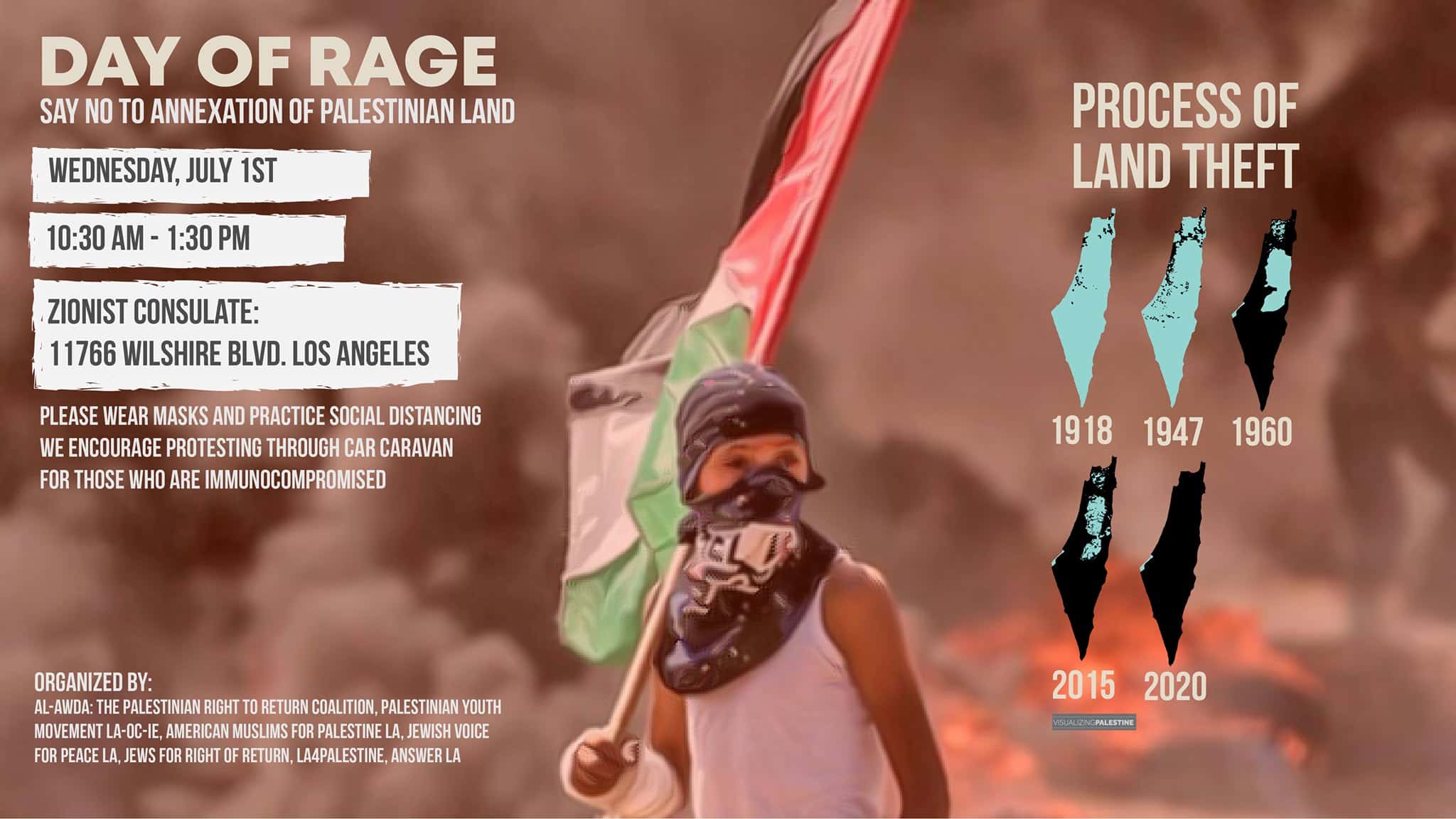 Support the Palestinian Call for Freedom! Day of Rage Against Israeli Annexation, Racism, and Brutality!

WHEN: 10:30am, Wednesday, July 1st
WHERE: In front of Israeli Consulate, 11766 Wilshire Blvd, West LA 90025
WHAT: Meet on the sidewalk and/or join a car caravan to consulate starting from Los Angeles, Orange Co, Inland Empire, and Ventura. (Message us for details).

On Wednesday, July 1st, Los Angeles will join the international fight against the annexation of illegal settlements in the West Bank and large swaths of the Jordan Valley. This annexation will consume the remaining areas of the West Bank under nominal Palestinian control.

We will protest the continued genocide, ethnic cleansing, theft of land, and daily violations committed by the Zionist state.

We will mourn the latest murders by the Zionist military of Eyad Hallaq, 32, killed on his way to special needs school, and Ahmed Erekat 27, on his way to pick up his sister from the beauty parlor on the night of her wedding.

We also call on those who support the Palestinian struggle to uplift the Movement for Black Lives here as the best way to express true international solidarity. Palestinian liberation cannot be achieved without Black and Indigenous liberation, without the liberation of all oppressed peoples.

“This is not about one bad Israeli soldier, just as it’s not about one bad cop ever. This is a system. It is an apartheid system. It is a settler-colonial system that enshrines Jewish Israeli supremacy as a matter of law and policy on an international scale. And it is one that marks Palestinians for removal, exile or death. And it is done with the full, unequivocal, diplomatic, financial, military support of the United States and with the complicity of the international community.

So it bears upon us to respond to this moment by supporting the Palestinian call for freedom, by doing the little that we can by engaging in boycott, divestment, and sanctions for Ahmed, for Razan, for Iyad, to oppose the annexation, to oppose apartheid, to fight for freedom.”

Please join us in this Day of Rage as we reject the annexation plan and all racist, settler-colonial states, affirm our collective struggle towards liberation and defend our lands and people until freedom!