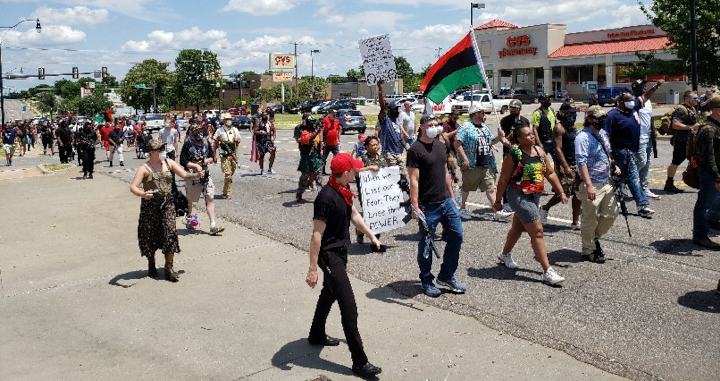 While the world watches Tulsa, with President Trump’s first election campaign rally, a smaller but significant “armed” demonstration of 175 took place here in Oklahoma City. In a multinational march and rally to the governor’s mansion, of mostly Black military veterans, they protested police brutality and called for District Attorney David Prater to reopen the investigation into the 2015 police killing of young Black man, CJ Pettit.

The group and their organizer, Omar Chatman, are also demanding the state legislature enact laws that would hold officers accountable when they are found to be at fault in any incident of police activity. They want officers to be required to carry their own liability insurance, and they are demanding that the International World Court investigate the United States for human rights violations of its Black population.

Protest leader Michael Washington told this reporter, “We want justice for George Floyd.” In regards to the president’s visit to Tulsa, “We are doing this in opposition to him. We don’t like him because he is a racist, a white supremacist, and he doesn’t care about human life, especially Black folks. Today, we shall deliver a letter of our demands to the governor.”

In formation, with armed demonstrators forming a box around unarmed ones, they marched a mile through the streets of Oklahoma City’s Black community to the cheers and honks of those passing by. They chanted, “We are human beings! Can’t take police brutality no more!”

About one-third of the protesters were white. Many, like the Black protesters, are military veterans. One of them, Tim, a former welder, a veteran and first-time protester, told this reporter, “We have come armed to protect the demonstration. To ensure peace and prevent provocations. Because when cops get involved, it is bad news for us.”

Protest organizer, Omar Chatman, told the rally outside the governor’s mansion: “What did they do to brother Martin? They executed him. What did they do to Malcolm? They executed him. But you can’t tell me a point in history where he was violent. Malcolm said, ‘We are nonviolent with those that are nonviolent with us, and we are violent with those that are violent with us.’ Today, we are nonviolent, but if they push me, they will see the Malcolm in me. There are Malcolms and Martins out here, and we are all demanding justice and equality in the year 2020. … They, the police, have elevated themselves to judge, jury and executioner. The baddest gangs in the land are the boys in blue.” The crowd thundered back, “No justice! No peace! No racist police! Black lives matter!”