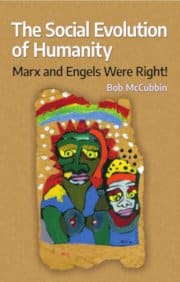 Here is Chapter 30 from “The Social Evolution of Humanity: Marx and Engels Were Right!” by Bob McCubbin, a study of the evolution of humanity focused on human social/sexual relations (including “marriage”) and, in particular, the changing social status of women. McCubbin is the author of “Roots of Lesbian and Gay Oppression: A Marxist View.” First published in 1976, during the first flush of the modern LGBTQ2S movement, McCubbin’s unparalleled achievement was to offer a historical analysis of when, where, why and how LGBTQ2S oppression developed. “The Social Evolution of Humanity” is available at Amazon.

We are a movement of masculine females and feminine males, crossdressers, transsexual men and women, intersexuals born on the anatomical sweep between female and male, gender-blenders, many other sex and gender-variant people, and our significant others.

In this listing of gender-variant folk, and in the thousands of reports of sex and gender diversity found among the populations of the world’s cultures, we find a type of human being and a manifestation of human culture unaddressed by the founders of Marxism.

Feinberg’s important contribution to Marxist theory was to contextualize this part of the human family within the framework of the unfolding of the global class struggle. With convincing anthropological and historical evidence, she demonstrated how gender expression, like sexual expression, came to be manipulated, restricted and repressed by ruling-class forces with the onset of patriarchy.

But did these cooperative [foraging and hunting] societies only have room for two sexes, fixed at birth? It has become common for social scientists to conclude that the earliest human division of labor between women and men in communal societies formed the basis for modern sex and gender boundaries. But the more I studied, the more I believed that the assumption that every society, in every corner of the world, in every period of human history, recognized only men and women as two immutable social categories is a modern Western conclusion. …

Our earliest ancestors do not appear to have been biological determinists. There are societies all over the world that allowed for more than two sexes, as well as respecting the right of individuals to reassign their sex. And transsexuality, transgender, intersexuality, and bigender appear as themes in creation stories, legends, parables, and oral history.

As I’ve already documented, many Native nations on the North American continent made room for more than two sexes, and there appeared to have been a fluidity between them. Reports by military expeditions, missionaries, ethnographers, anthropologists, explorers, and other harbingers of colonialism cited numerous forms of sex-change, transgender, and intersexuality in matrilineal societies — societies where men were not in a dominant position. In these accounts — no matter how racist or angrily distorted by the colonial narrative voice — it is clear that transsexual priestesses and other trans spiritual leaders, or medicine people, have existed in many ancient cultures. (43-44)

‘Gender and sex diversity are global in character’

I’m not arguing that all of these examples from diverse cultures are identical to modern Western trans identities. Nor am I trying to unravel the matrix of attitudes and beliefs around trans expression in these societies. The importance for me is the depth and breadth of evidence underscoring that gender and sex diversity are global in character, and that trans people were once revered, not reviled. How else could a trans person be a sacred shaman? In communal societies, where respect could not be bought or sold or stolen, being a shaman, or medicine person, was a position of honor. (47)

“So how and why,” Feinberg asks, “did attitudes towards trans people plummet so drastically?” Guided by Engels, she finds the answer in the development of early class societies in the Middle Eastern Fertile Crescent. She remarks that, as a Jewish person, the anti-trans passages in Deuteronomy and the anti-homosexual passages in Leviticus bothered her. But they, like the campaigns against cross-dressing deities (e.g., the Syrian goddess Atargatis) and rulers (e.g., Egyptian Queen Hatshepsut and Assyrian King Ashurbanipal), were co-existent with the development of private property and the amassment of private wealth in the hands of men, as Engels so masterfully elucidates in Origin.

Hostility to transgender, sex-change, intersexuality, women, and same-sex love became a pattern wherever class antagonisms deepened. As a Jewish, transgender, working-class revolutionary, I can’t stress enough that Judaism was not the root of the oppression of women and the outlawing of trans expression and same-sex love. The rise of patriarchal class divisions were to blame.

And I found that wherever the ruling classes became stronger, the laws grew increasingly more fierce and more relentlessly enforced. (Feinberg’s italics; 53)

This writer would only caution that Judaism, like the other patriarchal religions of the world, has been a powerful ideological force since the overthrow of mother right and continues to be presently. The patriarchal religions exist most fundamentally as reflections of existing class relations, which, as Feinberg notes, are based on existing property relations: the private property relations of slave and feudal societies in the past, and presently, the global dominance of capitalist private property.

The existence of sex and gender variation among Indigenous people, especially among Native North American peoples, has received much attention, perhaps because of the stark division posed by their clear acceptance among tribal people in contrast to the prevalent homophobia and transphobia of capitalist society that is only now being challenged by a movement of the people who have been traditionally targeted and their allies.

Walter Williams’ “The Spirit and the Flesh” offers a vast array of material highlighting the existence and importance of sex and gender-variant folk among Indigenous peoples. Criticism of his work by Native writers focuses on his uncritical use of the word “berdache,” his importation of the word “amazon” to refer to both lesbian and two-spirit women in Indigenous cultures and his assumption that homosexuality was an essential ingredient of the berdache/amazon experience. These criticisms are raised by a number of the contributors to the book “Two-Spirit People,” most of whom, however, also acknowledge the trailblazing importance of Williams’ research.

French explorers used the word berdache to describe male Indians who specialized in the work of women and formed emotional and sexual relationships with other men. Many tribes had female berdaches, too — women who took on men’s work and married other women. The History Project of Gay American Indians (GAI) has documented these alternative roles in over 135 North American tribes. …

As artists, providers, and healers, our traditional gay ancestors had important responsibilities.

Women hunters and warriors brought food for their families and defended their communities, like the famous Kutenai woman warrior who became an intertribal courier and a prophet in the early 1800s, or Woman Chief of the Crow Indians, who achieved the third highest rank in her tribe. Among the Mohave [sic], lesbian women became powerful shamans and medicine people.

Male berdaches specialized in the arts and crafts of their tribes and performed important social and religious roles. In California, we were often called upon to bury and mourn the dead, because such close contact with the spiritual world was considered too dangerous for others. Among the Navajo, berdaches were healers and artists, while among the Plains Indians, we were famous for the valuable crafts we made.

However, it’s important to take seriously the controversy that has arisen over the use of the word “berdache.” In the Introduction to the book “Two-Spirit People: Native American Gender Identity, Sexuality, and Spirituality,” editors Sue-Ellen Jacobs, Wesley Thomas and Sabine Lang write:

“Berdache” is now considered to be an inappropriate and insulting term by a number of Native Americans as well as by anthropologists.

M. Tiahui, a Native activist and co-leader of United American Indians of New England, offered a very precise explanation of “Two Spirit” in her contribution to the 2019 Pride edition of Struggle-La Lucha newspaper:

Perhaps you have heard the term “Two Spirit” used along with lesbian, gay, bisexual, transgender and other terms. If you are not Indigenous, this may have made you think that “Two Spirit” refers to Indigenous people who are lesbian, gay or bi. But being Two Spirit does not necessarily mean that someone is lesbian or gay since it does not refer to sexual preference.

“Two Spirit” is a pan-Indian umbrella term that describes Indigenous people who have mixed or nonbinary gender roles. …

While the term is relatively new, the concept has existed among hundreds of Indigenous Nations for thousands of years. Some Native Nations have terms for up to 4 or 5 different genders, for instance. Two Spirit people are considered to be nonbinary and to hold sacred elements of both feminine and masculine within them. …

Traditionally, in many tribal nations, Two Spirit people were held in high esteem. They were leaders, warriors, medicine (spiritual) people. They often played a special role with youth, including adopting children and giving special sacred names to babies. (2019: 2)

Many people who have seriously considered the evidence, hold the opinion that LGBTQ2S, gender nonconforming, gender fluid and gender nonbinary folk have always been an essential part of the human family exactly because of the unique contributions they have made to our species’ survival and well-being.

The present writer remembers, in a long past moment, reading a passage (but lacking memory of its source … a book? a journal article?) that highlights the crucial role that two-spirit people have played in Indigenous societies. The cited dialog between a young anthropologist and an elderly Native matriarch went something like this. The young investigator asks the woman, “Did there used to be special people in your tribe, people who married their own sex and perhaps dressed differently than other members of their gender?” The matriarch’s face lights up. “Of course there were people like that. They were our problem solvers. They were the glue of our tribe.” 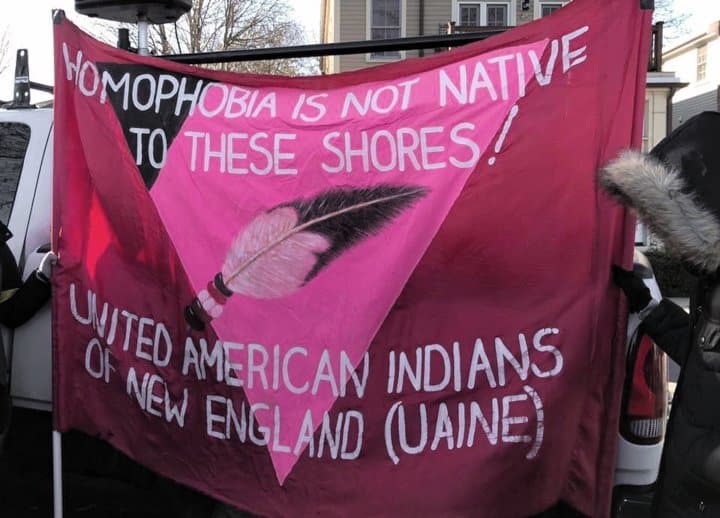