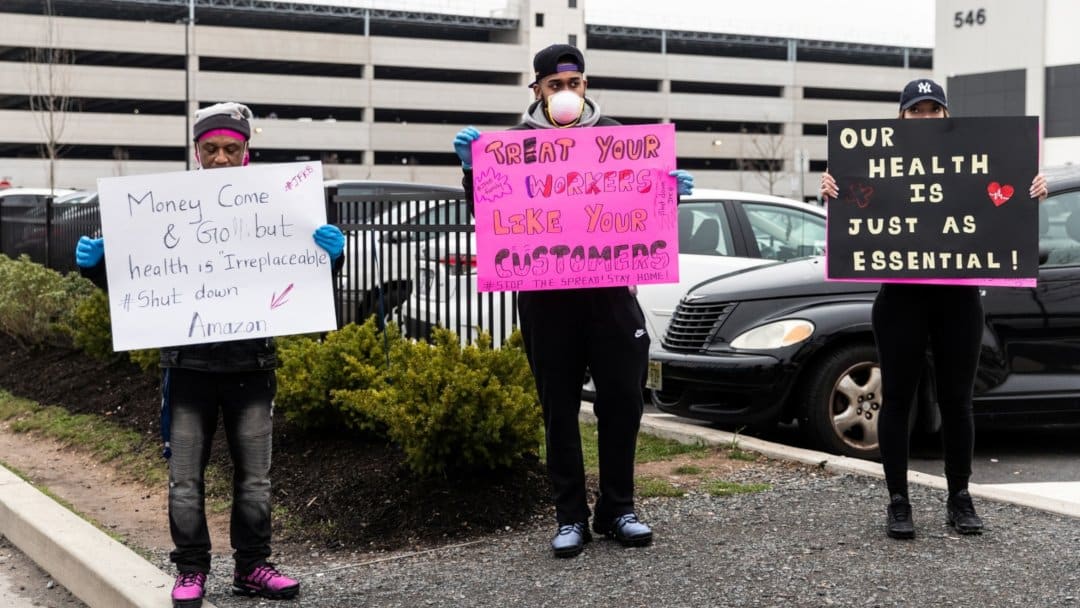 April 24, 2020 — A friend and comrade, Mikol, recently explained that the COVID-19 virus pandemic is of such proportions on a world scale that it will surely intensify the struggle of the workers and poor for social and racial justice, and against capitalism itself. Globally, 2,761,121 cases of the COVID-19 virus have been confirmed, of which, 193,671 people have died, but the real figures are even higher. The overwhelming majority of the victims are from the working class and poor of the world, who are always the most vulnerable.

While the COVID-19 virus was not man-made in a laboratory as the right-wing, anti-China media have charged, the lack of medicines and personnel, the lack of hospitals, of beds, of ventilators, of masks and gloves, the lack of planning to confront the virus crisis, was a conscious decision made by the ruling classes of the United States and Europe.

For the super wealthy, defending the lives of the workers and poor, who would die in a pandemic, was not a “profitable” investment to make.

According to Google News, the numbers of confirmed cases and dead as of April 24 are:

The world death toll figure of 193,671 is horrible and staggering, but the reason so many have died is not only because the COVID-19 virus is deadly; it is also because capitalism, the system of production of goods for profit, did not consider it profitable to produce medical supplies to be stockpiled for a future pandemic.

Politicians and the rich knew pandemic was approaching

One has only to see the video clips of President George W. Bush in 2005, of President Barack Obama in 2014 and of billionaire Bill Gates in 2015, to name a few of the spokesmen for capitalism, all of them hypocritically warning of a pending pandemic outbreak. Netflix even produced a documentary series, titled: “Pandemia.” Additionally, the U.S. intelligence agencies reported to President Donald Trump in November and December of 2019 that a virus pandemic had started in China.

But even with the warnings, the big business owners of industry and finance of the U.S. and Europe, driven by their blind urge to obtain greater and greater profits, consciously chose to ignore the warnings. After all, other areas of the capitalist world economy were generating huge fortunes in profits, and there isn’t much profit in producing medical supplies for storage, to protect working people and the poor.

Obama and Trump giveaways to corporations and the rich

Economically speaking, the big corporations of the U.S. were doing quite well under presidents Obama and Trump. Under Obama, to prevent the 2008 recession from further collapsing the capitalist economy, the big corporations received a $787 billion bailout package (the American Reinvestment and Recovery Act of 2009). The value of the stock market under Obama after three years registered a 53 percent gain in shareholder value as compared to when he took office.

Under Trump, the rich and super rich received a $1.5 trillion tax cut package in 2017, and up until Feb. 19, 2020, the stock market under Trump had grown by 42 percent in shareholder value as compared to when he took office three years prior.

No money for universal health care, but plenty for war and intervention

The U.S. and NATO imperialist governments, whose workers have suffered the brunt of COVID-19 deaths thus far, have spent trillions of dollars intervening militarily against Iraq, Afghanistan, Syria, Libya, Yemen, Iran, against the Palestinians and arming Israel, against People’s Korea, Venezuela and Cuba, etc. Trump, just this week, attempting to shift the blame for his mishandling of the COVID-19 crisis, said the U.S. had spent $8 trillion in wars in the Middle East.

The COVID-19 pandemic has exposed how the capitalist system has failed the health care needs of the workers and poor in all capitalist countries. The pandemic has demonstrated that one cannot successfully fight a viral epidemic that spreads from person to person if part of the population has no medical coverage and is not treated. Thus, the demand for universal medical coverage is crucial at this juncture of social-political development.

Mass unemployment on the rise in the U.S. and Europe

According to the latest announcements from the federal government in the U.S., in the last month, 22 million workers have filed for unemployment insurance coverage. The Financial Times estimates that 59 million workers in Europe will suffer cuts in working hours and pay, and others will suffer temporary or permanent layoffs. The International Monetary Fund forecasts a contraction of economic growth of 7.5 percent in the Eurozone this year, with unemployment hitting 10.4 percent or higher.

It’s unnecessary to keep citing figures showing the economic plunge in the works in the capitalist countries on a world scale.

Collective grieving may turn to anger

The workers on a mass scale are in shock. Some are in disbelief. Many are grieving the loss of family and friends. Their emotional understanding of the COVID-19 virus pandemic is mixed; some may see it as an act of God or an act of the Devil, others may see it as Mother Earth punishing humans for the exploitation that capitalism has thrust upon the planet.

But as the grieving process passes and unemployment sets in and is felt, the workers will look for a political understanding and for leadership to help guide the struggle for social justice in this new phase of social-political development under capitalism.

COVID-19 is not going to disappear

The COVID-19 virus is not going to disappear. Social distancing and shutting down sections of the economy were geared to buying time and limiting the number of deaths. Remember that there is no known cure for the pneumonia caused by the COVID-19 virus, and there is no vaccine to stimulate resistance to the virus as of yet.

Ordering workers to return to their jobs without having a cure for the pneumonia that the virus causes and without having a vaccine is equivalent to sentencing tens of thousands of workers to death. The grief of many may well turn into anger. Changes in mass consciousness are preceded by changes in the material conditions of social-political life. As Mikol said to me: “Tom, the COVID-19 virus pandemic is a game-changer on a world scale.”

Read more about Tom Soto’s historic contributions to the struggle.