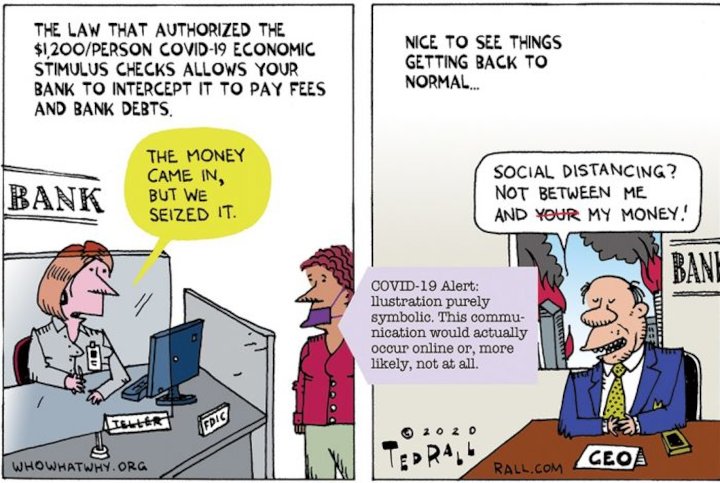 When the coronavirus pandemic struck, the public health system was functioning at a minimal level. Cutbacks in health care services accelerated after the 2008 Great Recession and the giant bank bailout. Under the slogan “Repeal and Replace Obamacare,” the cutbacks became more severe under Donald Trump. The system was not prepared or able to respond to the pandemic.

Without an adequate public health care system, the only possible response left to contain the contagion was social distancing and self-isolation: a shutdown. That shutdown has exposed that workers are essential. Life would grind to a halt without them.

The shutdown has also exposed some who aren’t essential. For example, a Wall Street hedge fund billionaire hiding out on a yacht doesn’t do anything we find to be essential. Completely nonessential, in fact.

Karl Marx, writing about the value of labor, said, “Every child knows that any nation that stopped working, not for a year, but let us say, just for a few weeks, would perish.”

Yes, today there has been a general shutdown of all businesses and everyone told to stay secluded at home. But there is an exception and that is for so-called essential workers. That includes not just health care workers, but also anyone producing food as well as transportation, electrical power and other services. Labor is essential or we would perish.

Of course, Marx also showed that labor power is the source of capitalist profits.

Workers are essential, so why aren’t we being protected?

With the shutdown came mass layoffs and furloughs. As of April 23, more than 26 million workers have lost their jobs in just the last five weeks.

The unemployment benefits system is overwhelmed. Many unemployment offices are not open to the public. Phone systems are overloaded and understaffed. State unemployment websites are no better, if you even have a computer with broadband access at home. (A study by Microsoft in 2018 estimated that about half the U.S. population — 163 million — have no high-speed internet service at home).

Jobless, no paycheck, unemployment benefits unreachable. What has been the government’s response?

When the most urgent need was to protect jobs, pay unemployment benefits to anyone without a job, halt evictions and foreclosures, and suspend all rent and mortgage payments, Trump and Congress passed a “stimulus” package that was mostly a giveaway to the Wall Street banks and financiers. About $454 billion was given directly to the Federal Reserve Bank. Another $340 billion went to Small Business loans. Some $250 billion went to unemployment insurance and a one-time payment to all adult taxpayers.

The one-time $1,200 check was not enough to carry anyone through a three-month shutdown. But even that was tied into the banks, who are able to claim any or all of the $1,200 for so-called debt payment. The $1,200 payments have been made only to those who have a bank account registered with the IRS.

The Paycheck Protection Program small business loans are supposed to be forgivable if the small businesses maintain current employee and compensation levels. But first, the program was set up in a way that encouraged businesses to lay off workers before applying for the loan.

The loan program was riddled with backdoors and loopholes, and the level of corruption was staggering. The $340 billion program ran out of money in just 13 days. The loans, which were supposed to go only to businesses with less than 500 employees, mostly went to larger ones because of the way the law was written.

One big loophole is the legal shell game called franchises. Giant corporations often operate through local outlets that are set up as franchises in order to evade laws and regulations. McDonald’s, for example, has used the franchise game to block labor unions and avoid enforcement of federal labor laws.

All the loans went through the big banks, which were paid hefty fees. And the banks made sure to maximize the fees they collected, even though it was not their money being loaned and they took absolutely no risk.

According to a suit filed by a group of small businesses in California, four of the biggest Wall Street banks — Bank of America, Wells Fargo, JPMorgan Chase and US Bank — unfairly prioritized emergency loan requests from large customers to earn fatter fees. Each bank “prioritized corporate greed at the expense of its small business customers,” the suit says.

The small business loans turned out to be another giveaway to the big banks.

So far, Trump and Congress have been heavy on giving funds to the rich, big businesses and the banks. It’s time to put an end to that and put the money and resources where they are most needed. Stop the layoffs, fund unemployment benefits for all who are jobless, halt evictions and foreclosures, and make sure that there is access to food for all.