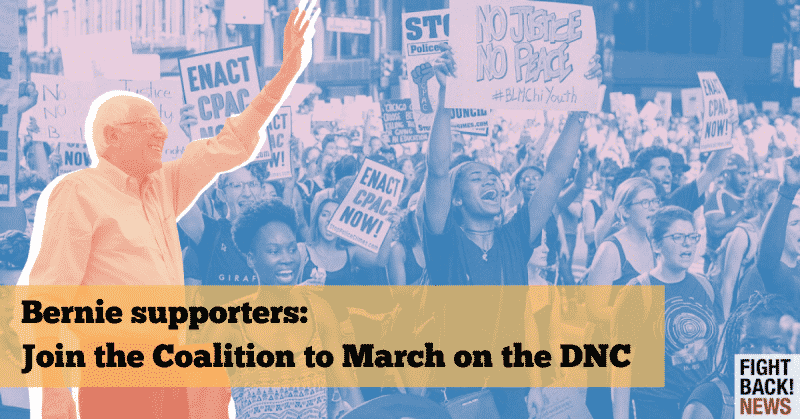 Statement by Coalition to March on the Democratic National Convention
April 10, 2020

On April 8, Senator Bernie Sanders suspended his 2020 Democratic primary campaign. The Sanders campaign has inspired millions of working class and oppressed people, including an overwhelming majority of young people. The movement-building emphasis of the Sanders campaign is what truly sets it apart from anything seen in the U.S. since perhaps Jesse Jackson’s Rainbow Coalition in the 1980s.

What Sanders’s candidacy demonstrated again in 2020 is that working and oppressed people in the U.S. want more than what they’ve been afforded under the current system. His candidacy has solidified the fact that the change that people here so desperately need cannot come from the electoral arena. The ruling class who is in control of these mechanisms will not allow a self-proclaimed socialist to attain the highest office in government. However, this exact thing is why Sanders’ insistence on a mass movement of people is so significant.

History has shown that only when masses of people have united around demands, organized themselves into movements, and demonstrated for their causes in workplaces, on campuses, and in communities across the country have they ever been able to win change. The Coalition to March on the DNC exists to bring together as many of those progressive movements as possible in an effort to demonstrate the kind of future that is necessary for the masses of working and oppressed people in the U.S.

We have always sought to build the broadest possible coalition, whether that means revolutionary organizations, non-profits, labor organizations, or any other element within the people’s movements. Most of our points of unity can be connected to the types of things that Bernie has been promoting for his entire life. The Coalition to March on the DNC is a natural landing spot for his supporters who want to keep building the people’s movements.

Defeating Donald Trump is going to be on the minds of most people heading into November. Doing this in a practical sense can take a number of different forms. While some will look to the ballot box as the only option, others will work to develop broader networks, building stronger bases in their workplaces, communities and schools, and seek to challenge Trump and his reactionary policies more directly.

Bernie has always been clear about one thing: regardless of who it is that occupies the White House, without a mass movement at the grassroots level, nothing meaningful will be accomplished. The Coalition to March on the DNC as a temporary alliance of the various people’s movements serves as the most immediate extension of this call to continue organizing.

The start of the DNC has been moved from July 13 to August 17 due to the coronavirus. The Coalition intends to lead a mass demonstration within sight and sound of the Fiserv Forum, including a rally with many speakers and a march. The event will begin at 10 a.m. on Monday, August 17, the first day of the convention. All progressives, socialists and people’s movements are encouraged to make plans to join the Coalition to March on the DNC in Milwaukee this summer. For more information, please visit the Coalition’s website at www.marchondnc.org.