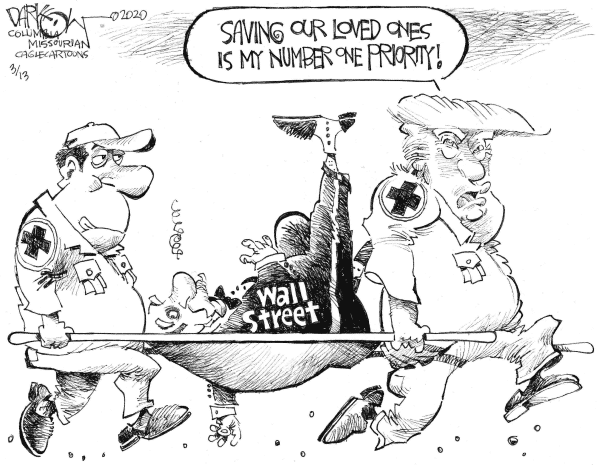 March 27 — The $2 trillion stimulus plan passed by Congress and signed by President Donald Trump on March 27 is a massive giveaway to Big Business and the Wall Street banks with a small, short-term plan for workers who’ve lost their jobs and possibly their homes.

The only part of the stimulus plan that gets much media coverage is the provisions for the working class. There’s a small increase in unemployment insurance, and a one-time direct payment of $1,200 per adult (not the $2,000 a month proposed by Bernie Sanders, which is what is being done in Canada).

These relief provisions will take about $250 billion, a fraction of the $2 trillion package. There is no support for full paid sick leave, no halt to evictions and foreclosures, no freeze on layoffs — economic measures that are required to counter the crisis.

Some $454 billion of the stimulus plan is a slush fund for the Federal Reserve Bank, report Pam Martens and Russ Martens. “The text of the final bill was breathtaking in the breadth of new powers it bestowed on the Federal Reserve, including the Fed’s ability to conduct secret meetings.”

The result, Pam Martens and Russ Martens say, is that the Federal Reserve will leverage the bill’s bailout fund into $4.5 trillion, which will be handed out through the New York Fed. And, to ensure that the Fed doesn’t have to reveal where that $4.5 trillion goes, the bill suspends the Freedom of Information Act for the Fed.

The rest of the $2 trillion plan? Some $367 billion is for small business loans. And then there are other industry-specific loans, including to airlines and hotels. None of those go to the workers in those industries or include any kind of job protection.

A hidden bonus payment is going to Boeing. The Wall Street Journal reports that “Boeing is set to emerge as a big winner of the coronavirus stimulus package.”

The Washington Post reported on March 25, “Lawmakers have inserted in the Senate’s $2 trillion stimulus package a little-noticed provision aimed at providing billions of dollars in emergency assistance to Boeing, the aerospace giant. … The carve-out is separate from the $58 billion the Senate package is providing in loans for cargo and passenger airlines.”

“Call it the ‘Boeing bailout,'” says R.J. Eskow, a senior adviser for health and economic justice, in a report produced by Economy for All at the Independent Media Institute. “As the world struggles with the pandemic, Boeing should be seen as the vector for a parallel epidemic. It’s Patient Zero in an epidemic of corporate failure.”

The corporate failure epidemic is the capitalist economic crash that was looming even before the coronavirus pandemic.

Boeing is among the largest global aerospace manufacturers. It is the second-largest defense contractor in the world, based on 2018 revenue, and is the largest exporter in the United States by dollar value, says USA Today.

In January 2020, Boeing had gone into negative numbers in sales of its commercial airplanes, that is, it was losing orders for the first time in more than 30 years.

In other words, the Boeing crisis and the bailout by Congress and the president has nothing to do with the coronavirus pandemic and its reductions in travel.

In commercial aircraft, Boeing was being outsold by Airbus, which had a more desirable, fuel-efficient jet, the New York Times reported on March 23, 2019.

American Airlines, an exclusive buyer of Boeing 737s for more than a decade, said in 2011 that their next order of hundreds of jets would be the Airbus. Boeing responded that they could produce a jet that matched the Airbus’ capabilities. In three months, Boeing was promising American Airlines a rejiggered 737 and called it the 737 Max. Development was rushed, safety steps were skipped.

All of Boeing was being rejiggered, not just the 737. Cost cutting and cutbacks were the rule in order to maximize profits. Airlines flying the Boeing jets began to complain about the quality of the jets they were receiving.

On Dec. 20, 2019, a test run of the Starliner capsule that Boeing built for NASA failed to reach the Space Station. “The NASA source said eight or more thrusters on the service module failed at one point and that one thruster never fired at all,” according to an Ars Technica report.

Another report concluded: “Not one of Boeing’s large projects seem to be without significant problems. The company has disgruntled its suppliers, its workforce, its customers and its regulators. This is the outcome of a 20 year process that changed the company culture into one where cost cutting and shareholder value were the highest priority. It will take years to change that back into one where good engineering and safety are the most valued attributes.”

In January 2020, Boeing finally shut down its 737 production line. It had more than 400 unsaleable 737 Max jets sitting in its parking lot, at an estimated cost of at least $1.5 billion a month. The total loss due to the 737 Max failure is now estimated to be $30 billion.

At that time, Congress had already given Boeing untold billions in the Pentagon budget that was signed by Donald Trump on Dec. 20, 2019. Rep. Rashida Tlaib, one of just seven Democrats to vote against the trillion-dollar spending plan, said, “These are huge checks being written to Boeing and Lockheed Martin, when we should be cutting checks to everyday people struggling to make ends meet.”

Boeing and Lockheed Martin are the two top arms manufacturers in the world. They are the top two of the five corporations that get 90 percent of the Pentagon contracts. The other three are Raytheon, Northrop Grumman and General Dynamics. The five together are the infamous military-industrial complex.

Until the second 737 Max crash on March 10, 2019, in Ethiopia, which killed all passengers and revealed the jet’s instability, Trump had Patrick Shanahan, a Boeing senior vice president, sitting at the head of the Pentagon: Secretary of Defense (Department of War). The Department of War was established by George Washington in 1789 but was renamed “Department of Defense” in 1947 at the beginning of the Cold War in an attempt to obscure its purpose.

The late Senate Armed Services Chair John McCain (R-Ariz.) was among those expressing qualms about Shanahan’s ties to Boeing during the confirmation hearing, Politico reported. “I am concerned that 90 percent of defense spending is in the hands of five corporations, of which you represent one,” McCain told Shanahan. “I have to have confidence that the fox is not gonna be put back into the hen house.”

A crisis of capitalism

Boeing was already in trouble.

The aircraft industry was in a crisis of oversupply, as the business press put it, which was relieved somewhat when the Boeing 737 Max was grounded. And reports said that the possible return of the 737 Max jet to the market would trigger a crisis. “There could potentially be as many as 1,000 surplus aircraft next year,” Reuters reported.

The business press has been speculating about possible bankruptcy for months. This bailout might be comparable to the one the government did for General Motors in 2009, except this bailout isn’t being done as an investment. It’s a giveaway! Trump has said over the last few weeks that the federal government is going to step in and “help Boeing.”

The $2 trillion bailout passed by Congress and signed by Trump is not about fighting the coronavirus or helping the working class. The capitalist system was already on the edge of a bust.

Homelessness has reached record levels. The Coalition for the Homeless reported last year that the number of homeless in New York City had reached an all-time record high of 133,284.

The auto industry is also in a crisis. As CNBC reported last November, “Global car sales expected to slide by 3.1 million this year in steepest drop since the Great Recession.”

With an overproduction crisis that has plagued Big Oil since at least 2018, a price war pushing oil down toward $20 a barrel from $60 a barrel three months ago triggered the March 9 stock market nosedive.

Workers’ pay is at record lows, income inequality at record highs. Forty-four percent of all U.S. workers are in poverty, not even a living wage.

The $2 trillion bailout is a giveaway to the rich, who’re in a panic over the crashing capitalist system. It won’t stop the crash, the layoffs, the loss of homes, or the general instability and suffering for the working class and oppressed peoples in the U.S.