Hamburg, Germany — At around 6 a.m. on March 26, the Lampedusa tent at the Hamburg Hauptbahnhof (central station) was destroyed and possessions confiscated by a large contingent of police officers. One activist was arrested.

For seven years, the tent, functioning as a “permanent demonstration,” was a place of meeting, mobilizing, information and protection against weather for all those without shelter; it was a place of resistance, a place which said, “We are here to stay!” The tent served as a staging point in the fight against the internment and deportation politics of the Social-Democrat-Green-Party-controlled Hamburg Senate.

After having negotiated with the Assembly Authority (under whose jurisdiction the tent stood) the weekend prior, the tent was torn down without warning or explanation, despite not having violated the current regulations enforced in Hamburg to prevent the spread of the coronavirus, which prohibit the assembly of more than two people at once in public spaces.

The tent’s namesake is the Italian island Lampedusa, to which the activists fled the bombs and mercenaries of the NATO-backed war against Libya. Italy declined to grant the refugees asylum, opting instead to issue them European Union travel visas. They travelled to Hamburg, where the Red-Green Senate could have easily granted them group asylum as refugees of war. 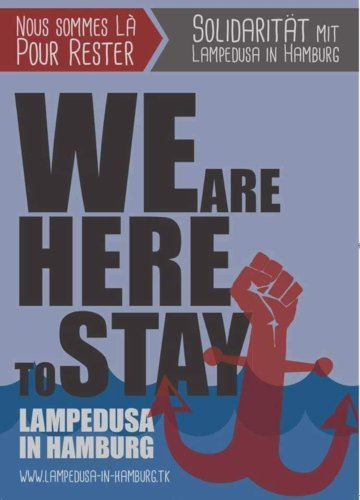 Rather than let themselves be isolated, the group founded and organised as “Lampedusa in Hamburg” and resisted all attempts at deportation or removal made by the German state. The tent stood as the center point and symbol of this resistance.

An activist recounted the raid in a video: “There were like [a] hundred policemen. They came and provoked us. They tried to escalate the situation. They destroyed the tent. I asked the policeman why. He just said, ‘The tent has to go.’ They arrested one of our members.

“African migrants are not welcome in Europe. But, meanwhile, we have Germans in Africa, misusing our resources. There are thousands of people out there who have nowhere to sleep. And today, they came to destroy our home. What we spent seven years to build, they destroyed in under one hour.”

And further, via a short interview on-site:

Q:  Did the state offer you any accommodation or health care?

A: They don‘t care. There is not any offer. We talked to them. They should give all the homeless a place to stay. There are so many empty houses, so many hotels. Put us there.

Q: So, the tent is gone now. What does it mean? Is the protest over?

For updates, visit No Pasarán Hamburg.