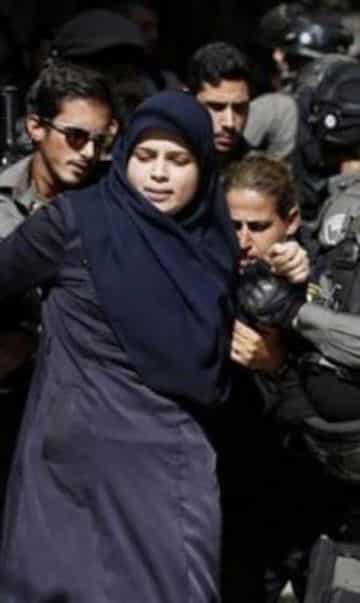 The arrest of Palestinian women and girls

Since the beginning of the occupation, over than 50 years ago in 1967, over 10,000 Palestinian women have been arrested and detained by Israeli occupation forces. In the past year, and just like previous years Palestinian women and girls are routinely arrested from the streets, Israeli military checkpoints, and during violent night raids on their homes. Those military incursions are accompanied with the presence of Israeli soldiers, intelligence officers, and police dogs, during which destruction of household items and property damage takes place. They are blindfolded and handcuffed, and they are forcibly taken to a military jeep. Women also continued to suffer torture and ill-treatment in interrogation centers, in addition to difficult and deteriorating detention conditions at Damon prison which once was a stable for horses and a storage for tobacco.

Some of the arrest cases of female prisoners from last year, included but was not limited to human rights defenders, such as Khalida Jarar, and Widad Bargouthi. Ex- Palestinian Legislative Council (PLC) member, Khalida Jarar was arrested on 31 October 2019. Soldiers broke into her house at around 3:00 am to arrest her. This is her third arrest in the past five years, she in fact, was just released in February 2019.

Widad Bargouthi who is a lecturer at Birzeit University was arrested on 1 September 2019, she given a list of charges which was mainly incitement through facebook. Additionally, Widad was taken to al-Mascobiyya interrogation center during her detention period, in an attempt to pressure her son, Qassam Bargouthi, who was under interrogation at that time. Widad received conditional release on 16 September 2019, which included 40.000 NIS bail, and house arrest in area C in the West Bank. Later on, the judge at Ofer military court

Through out the past year the Israeli Occupation Forces targeted university students including female students. Those female students were arrested from their houses after the middle of the night, they were taken to detention and interrogation centers and some of them were subjected to severe torture and other ill-treatment. This all prevents their access to education and leads to the violation to their right to an adequate education. The majority of the targeted students were also charged with university activism, this does not only criminalize their student activism but it is also a violation of their right to peaceful assembly and association.

Mais, who is a fourth-year university student at Birziet university and studying journalism was arrested on 29 August 2019 in a raid on her house. Mais’s family house was violently raided by a large numbers of Israeli occupation forces that were heavily armed and escorted by trained security dogs. Abu Gush was then transferred to al-Mascobiyya interrogation center, where she was subjected to severe physical and psychological torture and ill-treatment, for around one month. After around one month, Mais was transferred to Damon prison and was provided with list of charges, which included participating in university activities and coordinating a summer camp, she is still waiting her trail.

Samah graduated from Birziet university in summer 2019 with a sociology degree. She was arrested by the occupation forces on 7 September 2019. A special force unit raided her house after the middle of the night and arrested her. She was taken to al-Mascobiyya interrogation center where she spent around one month in interrogations before she was transferred to Damon prison. During her interrogation Samah suffered from torture and ill-treatment methods, which included stress positions, threat of the family members, solitary confinement and watching other detainees interrogated and tortured. Jaradat received a list of charges that included university activism and is detained waiting her trail.

Leen Awad who is a university student at the Palestinian Polytechnic University was arrested from her house in Bait Omar, Hebron on 25 February 2020. Israeli occupation forced raided her house after the middle of the night, they damaged its belongings and confiscated several laptops and cellphones. Leen was then taken Etzion detention center and then Hasharon prison where she was interrogated about her student activism. On 3 March 2020, the Israeli military court at Ofer gave Leen conditional release which included 20.000 NIS bail by a third party and a fine of 1500 NIS.

It is also worth mentioning that the female prisoner Bayan Azzam from al-Ezarrya was arrested on 11 March 2017 and sentenced to 40 months in prison. Bayan is a university student at al-Quds open university and is considered to be the oldest student among female prisoners.

Torture and Ill-treatment against Female Prisoners

Upon being taken to interrogation and detention centers, female Palestinian detainees are routinely denied an explanation of their rights and the reason for their arrests. Often, they are denied attorney access and held for several days under interrogation where they are subjected to torture and ill-treatment. The methods of torture and ill-treatment used against female Palestinian prisoners cause severe physical and mental suffering. Interrogation methods include prolonged isolation from the outside world, inhumane detention conditions, excessive use of blindfolds and handcuffs, sleep deprivation, denial of food and water for extended periods, denial of access to toilets, denial of access to showers or change of clothes for days or weeks, being forced into stress positions, yelling,  insults and cursing, and sexual harassment.

In the past year, the case of Mais of Gush was one of the most extreme cases of female prisoners who were subjected to torture and ill-treatment. Mais spent around one month at al-Mascobiyya interrogation center where she suffered from severe physical and psychological methods of torture.

One other case was Hiba al-Labadi, who was arrested on 20 August 2019 from the border checkpoint between Jordan and the West Bank. Hiba was transferred to Petah Tikva Interrogation center where she spent around one month under interrogations. Al-Labadi informed Addameer’s lawyer in a visit the detention conditions she suffered from; this lawyer’s visit came after Hiba was banned from lawyers’ visits for a total of 25 days. Hiba was subjected to long interrogation sessions, sleep deprivation, humiliation, and the use of her family members in order to pressure her. After her interrogation period she was given a six-month administrative detention order without charges or trail. This made Hiba to start a hunger strike protesting her arbitrary detention. Hiba was on a hunger strike for 40 days, she suffered extremely throughout her hunger strike period. She finally stopped her hunger strike when the Israeli occupation authorities decided to release her.

Furthermore, the case of female prisoner Halima Khandaqji who was arrested on 1 January 2020. Halima informed Addameer’s lawyer of her detention conditions during her interrogation period which was at al-Mascobiyya interrogation center. Halima suffered from long interrogation sessions, stress positions, humiliation, and the threat of arresting her ten-year-old son and two daughters.

There are eight injured female prisoners and twelve sick female prisoners who suffer medical negligence by the Israeli Prison Services (IPS). The female prisoners constantly report to Addameer’s lawyer in regards of the negligence they suffer from. They informed the lawyer of the unprofessional discriminatory treatment they receive from the doctors and nurses. For instance, some of the prisoners said that a doctor or a nurse can use one injection with more than one of the prisoners, or use an open injection with them. They also constantly report that most of the time they do not receive their medication.

For example, prisoner Israa Ja’abes still suffers from her injuries and burns obtained during her arrest. Also, prisoner Ansam Shawahneh informed Addameer’s lawyer last month that she has been suffering extreme pain in her bones. She informed the doctor at the prison clinic several times but was only given mussel reliefs. After a while she was transferred to the hospital where they did several tests and realized that she has inflammation in her bones and that her body needs to take vitamins. However, she was not given the proper treatment until now.

Also, a number of the Palestinian female prisoners suffer from blood pressure, diabetes and a number of other sicknesses that require constant and adequate medical care.

Palestinian Females in the Context of Occupation Law

Israel is accountable for its actions in the occupied territory, particularly the ill-treatment of women during arrests and transfers. Article 12 of General Recommendation 28 by the Committee on the Elimination of Discrimination against Women on the Core Obligations of States Parties states that:

“Although subject to international law, States primarily exercise territorial jurisdiction. The obligations of States parties apply, however, without discrimination both to citizens and non-citizens, including refugees, asylum-seekers, migrant workers and stateless persons, within their territory or effective control, even if not situated within the territory. States parties are responsible for all their actions affecting human rights, regardless of whether the affected persons are in their territory.”[1]

Furthermore, Article 3(1)(c) of the Fourth Geneva Convention (1949) forbids “outrages upon personal dignity, in particular, humiliating and degrading treatment”. This happens regularly for female prisoners, particularly during transfer and strip-searching. Furthermore, according to international humanitarian laws, the Four Geneva Conventions and their Additional Protocols, the occupying power is obligated to protect female prisoners. Israeli occupation authorities are in fact, obligated to keep female prisoners in separate facilities than men, maintain their supervision to be only by women and provide them with their basic hygiene and health needs. In addition to this, female prisoners are, like the majority of Palestinian prisoners, held in historic Palestine territory and outside the occupied territory. This is in direct contradiction of articles 49 and 76 of the Fourth Geneva Convention which forbids the occupying power to deport protected persons, and specifically detainees, from the occupied territory.

Testimonies by Palestinian women and girls highlight the brutality of the arrest process as well as conditions inside Israeli interrogation, detention and prison centers, and even hospitals while in custody. The abuse, ill-treatment, and torture of Palestinian women and girls take place within the context of the ongoing occupation of over 50 years and annexation of Palestinian lands. In the Convention on the Elimination of all Forms of Discrimination against women, States Parties emphasize “that the eradication of apartheid, all forms of racism, racial discrimination, colonialism, neo-colonialism, aggression, foreign occupation and domination and interference in the internal affairs of States is essential to the full enjoyment of the rights of men and women.”[2]