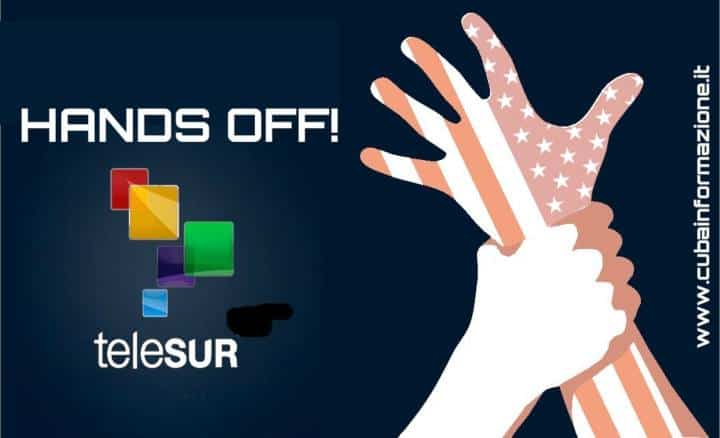 By Network in Defense of Humanity

It is difficult to gather together so many elements and of such weak credibility as those used today by the Empire’s lackeys with threats and attempts to silence teleSUR. These efforts only reaffirm the certainty of the value of this station in the battle of the peoples for their right to truth.

How many times have we, as spectators, felt comforted to see that a teleSUR team is in the place where transcendental events are happening for those who have been silenced, for those who have always been excluded, and it reports to us, from within, what is happening. We could not count on how many occasions this was the case, but we can transmit our deep gratitude and respect for such courageous and professional work carried out by the station. Only through teleSUR have we been able to learn about the merciless and lethal action of capitalism, the strength of the resistance of leaders and popular movements, and the events that have opened up real gaps in imperial domination that have marked the history of our peoples.

The arrogance of the powerful does not support the plurality of visions, of cultures, the transparency of information, or respect for the spectator. It does not support an in-depth analysis of the facts and their causes, it does not support the denunciation of the transnationals and their dirty dealings, the criticism of the obscene manipulation of the media and networks related to the system. For them, it is essential to silence this platform, one of the great achievements for the decolonization of Our America that Commander Hugo Chávez promoted.

It has been 16 years since that meeting in Venezuela in December 2004, where some 400 intellectuals from 52 countries met. It was at this meeting that the Network of Intellectuals, Artists and Social Movements in Defense of Humanity (REDH) was formalized and its final document, known as the “Caracas Call,” reads: “Support the establishment of a television station of the South and independent television and radio media at the service of the interests of our peoples.”

Immediately, President Chávez, with his strategic vision, assumed the commitment to create an audiovisual media associated with emancipation.  In this way, the stories of the Network and teleSUR are intertwined in a deep and embryonic way; therefore, safeguarding teleSUR, its philosophy, its ideals, and its work is not just a position, it is also our obligation.

Today we are facing a decadent empire, increasingly desperate as it sees its hegemony weakening in what José Martí rightly called Our America, something it needs to ensure its survival. Let us not underestimate these threats. Let us redouble our efforts and remain alert to prevent them from depriving the peoples of their right to truthful, plural and timely information, which, together with the right to work, health, education and culture, continue to be the most valuable aspirations of humanity today, 20 years into this new century.

Dear Patricia, you are actually being honored in a unique way by having the successful work of the network and your own work as its president among one of the main targets of the Empire. TeleSUR is a child of the battle of ideas and of the fathers of this new continental era: Commanders Fidel Castro Ruz and Hugo Chávez Frías. We will win, without a doubt. We assume its defense without hesitation or half-measures. It is an irreversible commitment of all the comrades who make up the Network in Defense of Humanity and many other similar movements.

As the Venezuelan poet Víctor Valera Mora said: “The sun of the world we will make/those who will live greet you.”

TeleSUR, tell us what else you need from us, and we will be there!

A fraternal and solidarity-filled embrace,

On behalf of the Network in Defense of Humanity, Executive Secretariat

Source: In Defense of Humanity