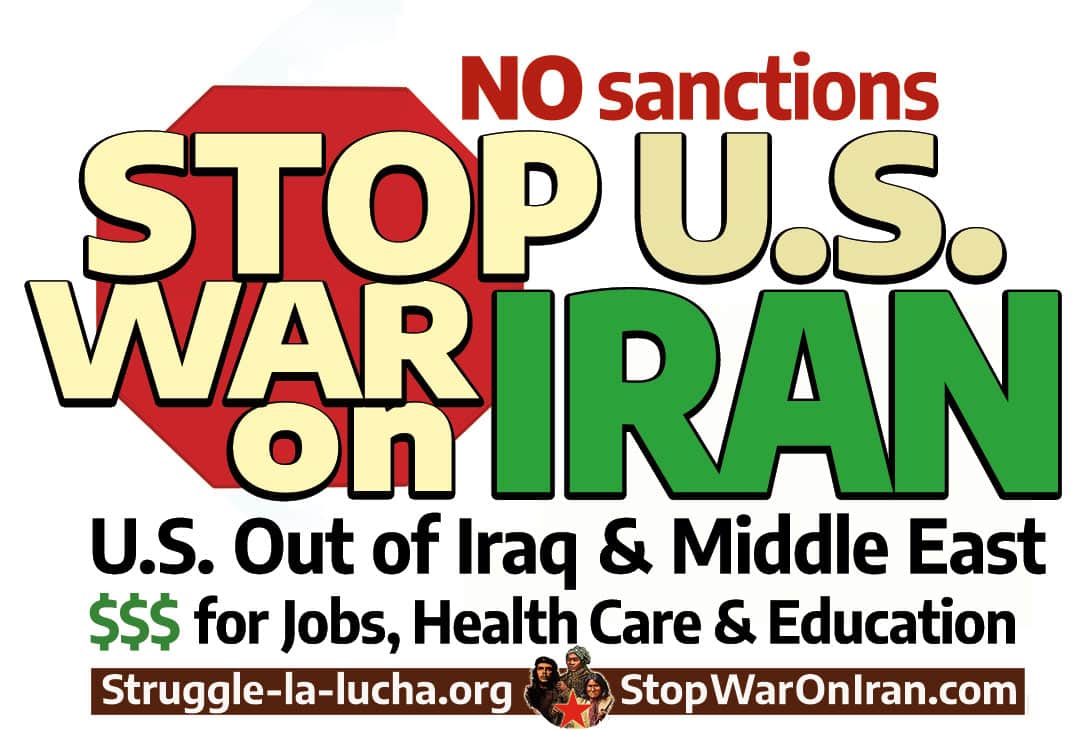 The Trump regime has launched a cowardly sneak attack on two countries with which the U.S. is not at war. The murders of Iran’s Gen. Qassem Soleimani and Iraq’s Abu Mahdi Mohandas are calculated to unleash more war and destruction across the entire region. It follows the murder of 25 Iraqi soldiers by the U.S. Air Force four days earlier.

These murders are crimes against peace, the highest war crime under international law. They are a global version of Cointelpro, the U.S. government secret program which murdered dozens of Black, Latinx and Indigenous leaders in the 1960s and 1970s.

New reports say U.S. Marines are “arresting” (translation: kidnapping) elected Iraqi legislators. The racist settler regime of Israel is collaborating with the White House and Pentagon in escalating this war.

Huge profits and investments at stake

Who could want such a thing? The energy interests that dominate the Trump White House, and the banks that fund them want it most of all. Secretary of State Mike Pompeo’s political career was paid for by Koch Industries, a major fracking profiteer. Big Energy has come to depend on war in oil-rich West Asia and North Africa. Now they are in a crisis, as headlines in The Wall Street Journal (WSJ) attest:

“The bill is coming due for the shale industry’s price war with OPEC, with North American oil-and-gas companies having more than $200 billion of debt maturing over the next four years,” begins the article that follows.

Nonetheless, “Big Investors Showing Love to Gas Fields Others Shun,” the WSJ reported on Dec. 26. Among those buying up unprofitable fields is Trump ally and Dallas Cowboys owner Jerry Jones. More important, ExxonMobil and Chevron announced major investments in the Permian Basin earlier this year, despite falling prices. “The next era of shale drilling is likely to be led by the major oil companies,” the WSJ commented.

The global energy glut also imperils the profits that U.S. banks hope to make off the public offering of Saudi ARAMCO, the world’s biggest oil company, and U.S.-Israeli plans to market stolen Palestinian gas in Europe. Trillions of dollars in profits and investments are at stake.

The U.S. wars against Iraq, Libya and Syria brought huge profits to Corporate America, especially energy firms. They made possible the fracking boom, into which major banks and corporations poured hundreds of billions of dollars. But it was a bubble, and that bubble has collapsed. The Trump regime is betting that a major war can bring it back.

War on Iran is war on the working class here

War with Iran may further enrich bankers and billionaires, but it will only bring disaster to working-class and oppressed communities here. Dr. Martin Luther King said, “The bombs that fall in Vietnam explode here.” The same is true of the bombs and missiles the U.S. drops on West Asia and North Africa.

We will also pay the cost of this war at the gas pump and in the cost of heating oil this winter.

The war is also meant to save and strengthen the fracking industry, which is poisoning Native and rural communities across the U.S. and is a major cause of cancer. It is also a major source of climate-changing methane.

The corporate media have roasted Trump for impairing U.S. intervention in Ukraine. But they are gloating over the Trump regime’s completely illegal targeted assassinations.

Some Democrat politicians have offered milquetoast criticism of this dangerous escalation. Nancy Pelosi is concerned that Trump went around Congress. But will they act now to stop this war? Will they impeach Trump for crimes against peace and violating the War Powers Act? Will they get all U.S. troops, ships, planes and military assets out of the region now?

The people must intervene

We cannot rely on bourgeois politicians. We need urgent mass action in the streets and in the workplace to stop this war!

Hands off Iran! U.S. out of West Asia and North Africa! No more wars for oil monopoly profits! Bring all U.S. troops, ships and planes home now! End sanctions now! End all aid to the racist state of Israel! Money for schools, health care and housing, not the Pentagon and the CIA!