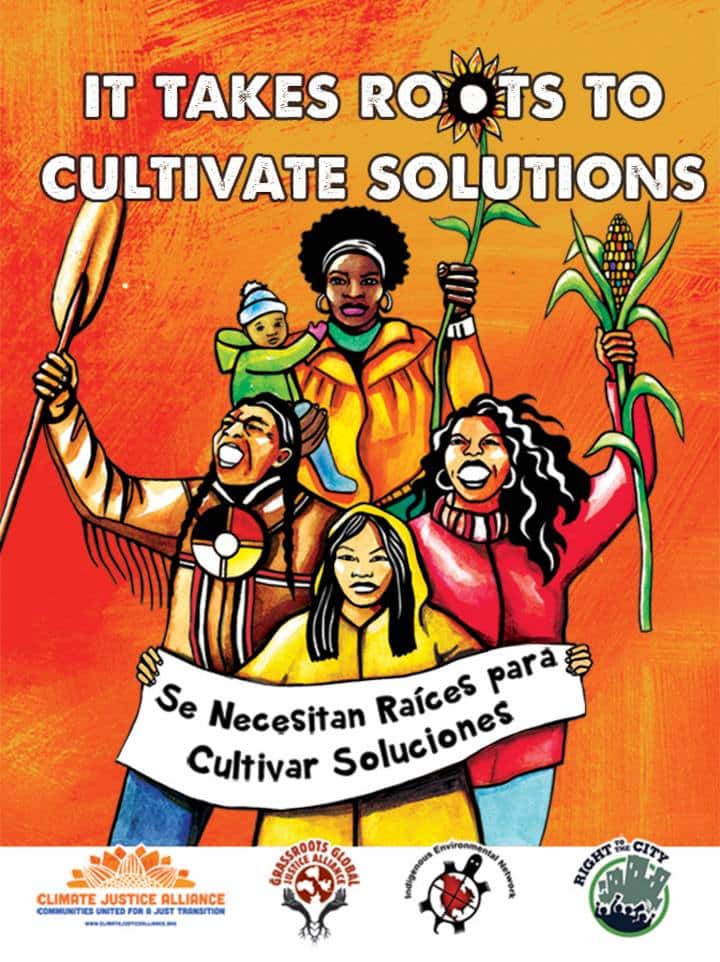 Madrid, Spain — The two-week UN climate meeting collapsed Dec. 15, ending with no new commitments to increase ambitions to reduce emissions at the levels needed to keep global temperature rise below 1.5 degrees Celsius. The It Takes Roots (ITR) delegation came to Madrid to bring frontline voices from the U.S., and Native youth from Canada, to demand real solutions to stop business as usual in fossil fuel development and to keep fossil fuels in the ground.  The vast majority of this expansion is projected to come from the U.S. and Canada.

“We went to the UN COP25 meeting to build momentum in the opposition to its false solutions agenda. These false solutions, such as using carbon markets to ‘offset’ rather than cut emissions, will only deepen the climate crisis and shift the burden of carbon trading to the Global South. Indigenous people’s territories, rights and self-determination are all threatened by carbon offsets and the privatization of Mother Earth. The new REDD, Nature-Based Solutions, launched by the oil industry at COP25, wants to use half the world’s land for offsets. Stop the planet grab for carbon colonialism,” says Tom BK Goldtooth, executive director of Indigenous Environmental Network.

“It’s business as usual with Canada expanding fossil fuel development,” says Eriel Deranger, executive director of Indigenous Climate Action. “As the climate emergency worsens, Canada is considering approving the Teck Frontier project. This project is the largest open-pit tar sands mine ever proposed while claiming to achieve ‘net’ zero carbon emissions by 2050. This recklessly conceived extraction will contribute six metric tons of greenhouse gas annually. This is an example of how Canada continues to put profits over Indigenous rights while putting the planet at risk with another carbon bomb,” says Deranger.

Indigenous Environmental Network (IEN), a member of the Indigena Minga that converged in Madrid with Indigenous representation from Chile, Ecuador, Columbia, Brazil and other areas of South America, presented a declaration to the national, international and government representatives at the UN meeting including the following sentences:

“The patriarchal, capitalist and colonialist system has brought us into this climate crisis. We see many representatives of states considering only mercantile and financial profit, without taking into account the importance of life. For this reason, we understand that they are accomplices of all this destruction. If oil, gas, minerals and coal are in the depths of the earth, it is because Mother Nature left them buried there, to bring them into our environment is to contradict her wisdom.”

“These market systems are a greenwash for the polluting companies to continue to expand fossil fuel development that disproportionately force onto and violate the rights of women and our children living next to oil refineries, fossil fuel extraction and along the transportation systems such as pipelines. Along with these extractive industries come man-camps, bringing men from all over the country, often with questionable backgrounds and criminal history. Domestic and sexual abuses increase against Indigenous women and other women wherever the fossil fuel industry has come into,” said Bineshi Albert, IEN’s Movement Building Coordinator. “We have a year to keep building against the carbon mechanisms in Article 6. We are not going away, we will build the movement to save Mother Earth.”