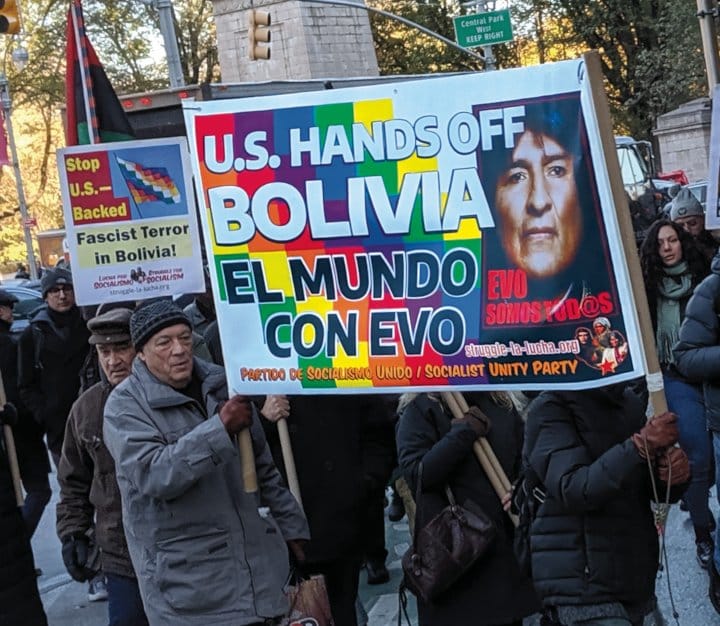 We, the undersigned U.S. organizations condemn the civic-military coup in Bolivia and the brutal repression unleashed by the police and military authorized by the self-proclaimed anti-Indigenous “President” of Bolivia, Senator Jeanine Áñez.

The regime has burned the Wiphala, flag of the Indigenous nations of Bolivia; decreed an exemption to prosecution for the police and military for the use of lethal force against demonstrators; and has criminalized democratically elected officials and rank and file members of organizations associated with the deposed government. These decrees led to the massacre in Cochabamba on November 15 in which police and the armed forces opened fire on demonstrators killing five people and wounding more than 100, as well as the massacre of Senkata on November 19 in which at least 8 people were killed and at least 30 wounded. They have also led to the deployment of military, police and private intelligence agencies to hunt down and arrest political opponents of the coup regime.

We urge an immediate investigation by the U.N. of the killing of at least 32 people and the wounding of more than 700 by the police and security forces since the coup against President Evo Morales on November 10, 2019, based on official data from the Office of the People’s Defender  (“Defensoría del Pueblo”). We also call for the release of all political detainees.

We support calls by the constitutional President, Evo Morales as well as the United Nations, for dialogue to avoid further bloodshed. We call for the return of security forces to the barracks and an investigation into the crimes committed by the police and military, as well as those who authorized the use of lethal force, to hold perpetrators accountable.

We also reject the illegal self-proclamation as “President” of Senator Jeanine Áñez, elected without a quorum and without the presence of MAS members of congress, whose safety is under permanent threat. This self-proclamation also violates article 161 of the Bolivian Constitution, according to which Congress must accept the President’s resignation in order for it to be valid, which so far hasn’t taken place.

We urge the U.S. Congress and the Organization of American States (OAS) to condemn the coup against the constitutional government and support the path of dialogue over escalating confrontation.

WE DEMAND AN IMMEDIATE END TO THE KILLING OF INDIGENOUS BOLIVIANS!