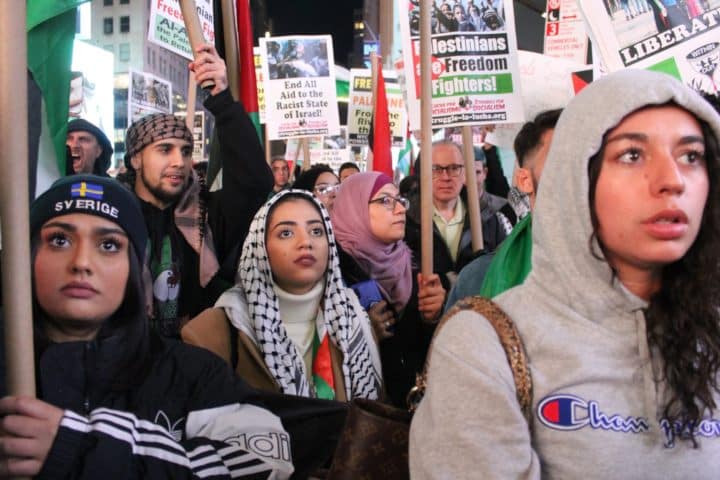 Hundreds of people took to the streets in Times Square in New York City on Friday, Nov. 15, to protest Israeli attacks on Gaza and support the Palestinian struggle for liberation.

The protest came as part of the call for an international day of solidarity with Palestinian resistance issued from Gaza after Israeli assassinations and bombing raids over two days of attacks killed 34 Palestinians, including eight members of one family, and injured 111 more.

Demonstrators gathered for brief speeches and ongoing chanting in solidarity with Palestine.

Chants echoed through the evening as protesters carried signs and Palestinian flags.

Demonstrators marched through Times Square to Herald Square, chanting the entire route and calling for the boycott of Israel and a liberated Palestine from the river to the sea.

The protest ended with a strong call for further actions from Nerdeen Kiswani of Within Our Lifetime – United for Palestine.

Joe Catron, U.S. coordinator of the Samidoun Palestinian Prisoner Solidarity Network, said that the demonstration was the largest and most enthusiastic action for Palestine in New York since December 2017, when Donald Trump announced that the U.S. recognized Jerusalem as the capital of Israel.

He emphasized the importance of continuing these activities against Zionist occupation, apartheid and colonization, and in support of the Palestinian resistance.

Catron noted that these are especially important in the U.S., which exercises its full imperial power in support of the Zionist colonization of Palestine, including through the provision of $3.8 billion annually in military aid.