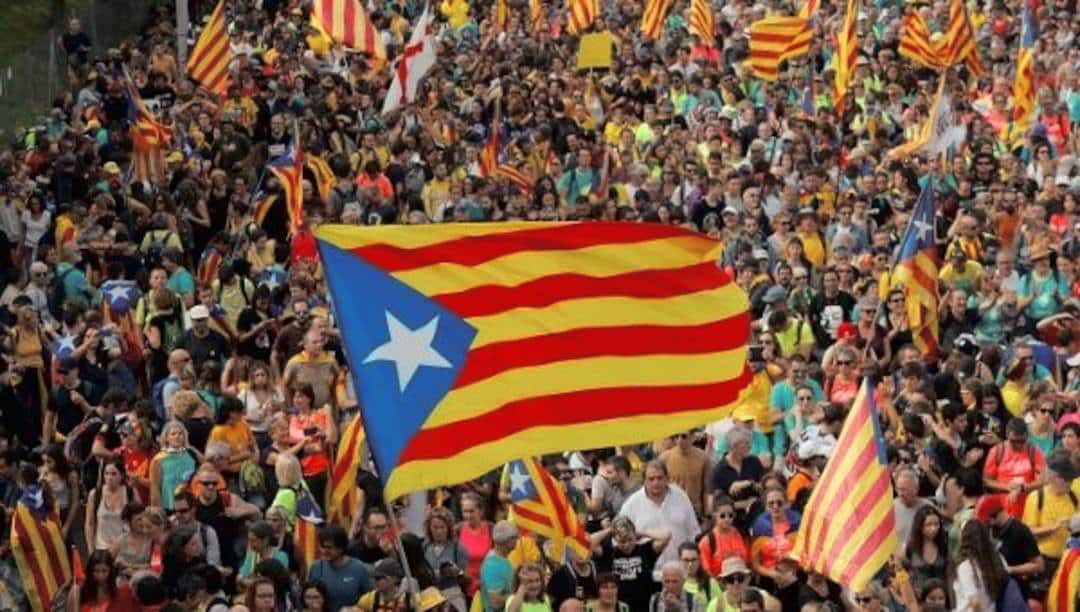 Militant protests erupted in Barcelona and other cities of Catalonia, a colonized region of the Spanish state, after a Spanish court handed down harsh sentences to nine Catalan independence leaders in mid-October. During an Oct. 18 general strike called by the Intersindical-CSC and Intersindical Alternativa de Catalunya, unions joined in massive “Marches for Freedom” throughout the Catalonia.

Struggle-La Lucha presents this commentary by Basque activist Iña Martinez on the recent developments and the long struggle of the Catalan and Basque peoples for revolution and national liberation.

It’s the slogan/lie repeated ad-nauseam by the Spanish government to Basques and Catalans, among others. The Spanish government and its media said again and again, “All without violence,” so that we would believe that if ETA (Euskalerrria ‘Ta Askatasuna/Basque Homeland and Freedom movement) gave up its arms (which it did in 2011), we could talk and solve everything without violence.

Now, in 2019, we can see that “All without violence” was nothing more than a slogan to silence the demands of democracy and freedom of Basques, Catalans and all peoples colonized by Spain. The Spanish state has always wanted the monopoly on violence and that is how it wants things to remain. 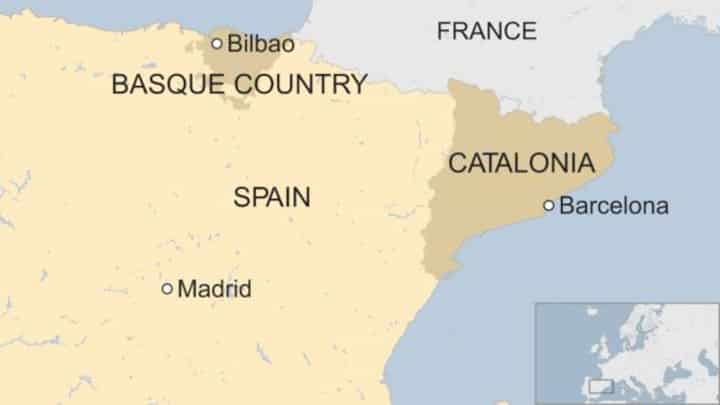 A little bit of history: Catalonian President Lluís Companys was shot dead on Oct. 15, 1940, by the Spanish fascists, who made the coup d’état in 1936 against the left-leaning Republic and began the fascist dictatorship. Lluís Companys, as requested by the Catalan people, had declared the independence of Catalonia a few years prior. The Catalan people wanted to govern themselves. They didn’t like living under the Spanish yoke.

The Spanish dictatorship that subdued all peoples–Catalonians, Galicians, Basques and anyone who would not agree to the idea of “Spain: One, Big and Free”–lasted from 1939 to 1975, when the dictator Francisco Franco died peacefully in his bed just before his 83rd birthday.

The big capitalists and landlords of Spain wanted us to believe that once the dictator was dead, the dictatorship would die with him. Not at all. This dictator was not about to leave Spain without a follow-up. He prepared Juan Carlos I to be his substitute.

In 1936, Spain was a republic (leaning left, nothing to do with the U.S. Republican Party) and the monarchy had been abolished. But in 1975, Franco groomed the grandson of the last king, Juan Carlos I, to take over, after he swore to the principles of the dictatorship, which he was happy to do. Juan Carlos I was sworn in as king two days after Franco’s death. And that is how we came to live under a fake “democracy” that is really a constitutional monarchy. (Juan Carlos I abdicated in 2014 in favor of his son, the current king of Spain, Felipe VI.)

Singer Evaristo Páramos of La Polla Records observed, “Fascism ate our freedom and after 40 years of digestion it pooped this democracy.”

The Catalan people have persisted in their demand to be independent from Spain. It’s not advisable to live under a regime that does not respect you. On Oct. 1, 2017, the Catalan government held a referendum in which 2 million Catalans voted — about half of the population. The Spanish police attacked voters leaving the polls. More than a thousand people were injured, some of them losing their eyes.

Nevertheless, of those who voted, 90 percent were in favor of independence, 5 percent against independence, and the other 5 percent were null. Then, the Spainish state detained and incarcerated the Catalan officials, elected by the Catalan population, who were ultimately the ones asking for the referendum to take place. The Catalan president at the time, Carles Puigdemont, asked for political asylum and since then has been living in Belgium.

That vaunted slogan of the Spanish government and its mass media, “All without violence,” is yet again exposed as a lie. Spanish police were seen and recorded as they burned trash bins in Barcelona. There are also recordings making evident the brotherly love between neo-Nazis and Spanish police. Other videos captured neo-Nazis beating up people and showing force, walking along streets without the police interfering. I don’t mean this was the only violence taking place, but these are instances of violence that the Spanish media are never going to recognize.

Saturday, Oct. 19: There have been huge shows of solidarity with Catalonia from Euskal Herria (Basque Country).

Gure Esku Dago (It’s Our Right), a political platform that unites unions and many Basque political parties, organized a 42,000-strong march in solidarity with the Catalan political prisoners in Donostia (San Sebastian) to show our solidarity under the common banner: “Erreferenduma ez da delitua” (“The referendum is not a crime”).

The action was peaceful. There were no altercations whatsoever. I didn’t even see the police. As my aita (father) says: “When the forces of order arrived, disorder was established.”

We have more than 200 political prisoners also in Euskal Herria. In particular, we are suffering a great injustice in Altsasu (Alsasua). In October 2016, during a village holiday in Altsasu, two members of the Guardia Civil (Civil Guard) dressed in civilian clothes and accompanied by their girlfriends went into a bar and started a fight at about 4 a.m. Afterwards, eight young Basques were detained and accused of terrorism. Since then, they have remained incarcerated even though the terrorism charges had to be dismissed as it was proved that they were made up.

The Guardia Civil, as the occupation force they are, get paid extra money due to the danger of living in the Basque Country. Since ETA disarmed in 2011, the Guardia Civil are still being paid the extra money. Apparently, they felt the need to justify the bonus by doing this injustice to the eight Basque youth of Altsasu.

And that is how we arrive at the upcoming general elections of Nov. 10 in Spain — the fourth in four years. The Spanish population gets bombarded with hate propaganda towards Basques, Catalans and others as it gives votes to the different Spanish political parties, including ones that call themselves left-leaning. These days, the Spanish media keep insisting about the violence in Barcelona and that gives lots of votes to the Spanish nationalist political parties (PP and PSOE) and even more to the openly fascistic ones, like VOX.

Coincidentally with the timing of the election is the exhumation of the murderous fascist dictator Franco. What a coincidence that after 40 years of being buried in the insufferable Monument of the Caídos, it has to be Oct. 24, just before the election, that his remains need to be moved to a less spectacular location! And the fascists will take advantage of all this to grow.

Franco not only ordered people killed by firing squad during the Civil War, he ordered killings all the way until his death in 1975. The political genocide committed by Franco against people with any left-leaning ideals had no limit. People who died at his hands were political representatives chosen by the people, left-wing republicans, communists, socialists, union members, even people who had not attended mass (priests would tell the military who had not been to church).

In conclusion, I adhere to Evaristo Páramos’ opinion of Spanish democracy. He’s right.