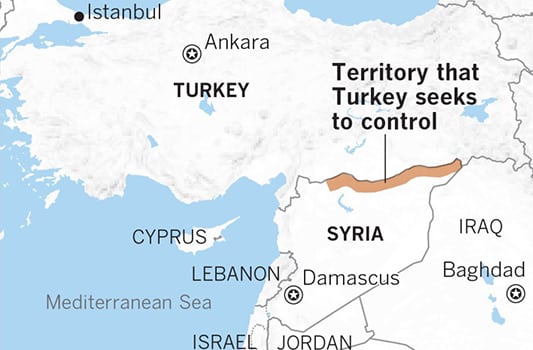 The U.S. Peace Council strongly condemns the illegal incursion of the Turkish forces into Syria with the approval of the Trump Administration and in direct violation of the United Nation’s Charter and international law.

Immediately after Turkish incursion, the US war establishment, Republican and Democrat alike, went on a broad attack on Trump’s decision to “withdraw” US forces from Syria, calling it a disaster for US foreign policy. According to the New York Times (October 14): “Mr. Trump says his decision to pull American troops out of the way of the Turkish advance was part of his effort to extricate the United States from ‘endless wars’ in the Middle East and elsewhere.” For the New York Times and many others in US foreign policy circles, the extrication of the US from its many foreign adventures represents a grave threat to the bipartisan commitment to US policy of global “Full Spectrum Dominance.”

Despite the public outcry and opposition from forces in both parties, it is quite clear to us that Trump’s plan to “withdraw” US forces from Syria has nothing to do with extricating the US from “endless wars” as the Turkish incursion demonstrated. On the contrary, the Trump Administration’s approval of the Turkish incursion is a clear sign of the failure of US policy of regime change in Syria and represents a last-ditch effort to partition the Syrian territory in the hope of securing a permanent military presence by the US and its NATO allies on Syrian soil. It appears that the Trump Administration’s real plan is to replace US occupying forces in Syria with the Turkish (NATO) forces, driven by Trump’s desire to quell the growing anti-war sentiment in the US before the 2020 elections.

The corporate media has even taken a step further by shedding crocodile tears for the Syrian Kurds. In the past several days, the corporate media outlets throughout the country have been bombarding the public with a barrage of moral condemnation of Trump’s decision to “betray the Kurds” without mentioning that the US and other imperialist powers have been directly responsible for the suffering of the Kurdish people not only in Syria but also in Iraq, Iran and Turkey for several decades.

As regards the Syrian Kurds, US decision-makers never had any regard for the plight of the Kurds. They were just seen as a convenient tool to advance U.S. efforts to partition Syria. The US attempts to block and undermine any reconciliation process between the Kurds and the Syrian government is a case in point.

However, this effort was also defeated this past Sunday when the Kurdish forces finally signed an agreement with the Syrian government to allow the Syrian Arab Army to enter the northern Kurdish areas of the country. According to the same article in New York Times, “The Kurdish-led militia said the Syrian government had a ‘duty to protect the country’s borders and preserve Syrian sovereignty,’ and would deploy along the Syrian-Turkish border.”

Barring new sabotages by the US warmongers, this agreement might be the final nail in the coffin of US policy in Syria. It will allow, for the first time since 2011, for the Syrian people to unite in defense of their national sovereignty and their country’s territorial integrity.

Now everything depends on how persistent the Trump Administration and the Turkish government are in holding on to the occupied Syrian territory. The US and Turkey can either abide by international law and the UN Charter and leave Syria, or can cause severe casualties on the Syrian people, and especially on the Syrian Kurds, by continuing their imperialistic project in Syria.

It is our collective responsibility in the US peace movement to organize a united national campaign in support of the Syrian people and demand the total withdrawal of all occupying forces from Syria.

Leave Syria to the Syrian People!