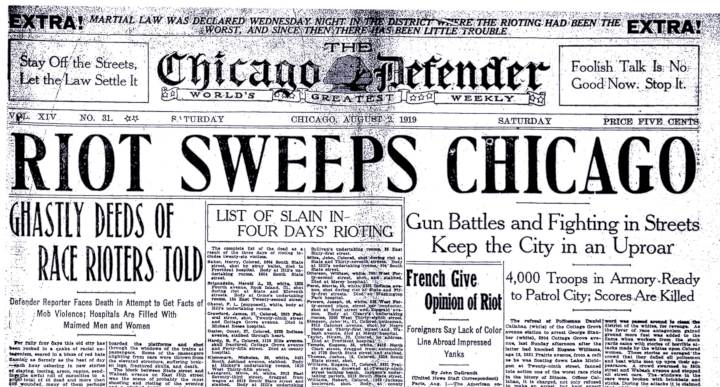 First in a series

A century ago, Chicago was convulsed by anti-Black riots. For days, African Americans were beaten and killed in a city whose first non-Indigenous resident was the Black man Jean Baptiste Point du Sable. Black workers couldn’t go to their jobs in the Union Stockyards, steel mills or downtown.

The violence started July 27, 1919, when five young Black men went to a beach on a hot Sunday afternoon. They climbed aboard a raft that they had helped build, went out into Lake Michigan and started diving from the vessel.

Chicago is a segregated city. It was worse a century ago.

When the raft drifted into waters off 29th Street, a racist named John Stauber started throwing rocks at the Black youth. One of the rocks struck 17-year-old Eugene Williams, who drowned.

Williams’ companions went with an African American policeman from the 25th Street beach who asked Daniel Callahan, a white cop, to arrest Stauber. Callahan refused and stopped the Black officer from apprehending the killer.

Reportedly, a thousand Black Chicagoans then assembled at the 29th Street beach and demanded the police arrest Stauber for murder. The police refused. A Black man named James Crawford was shot and killed by the police, but the crowd did not disperse. By nightfall, rumors of “race war” in white neighborhoods were running rampant, and the anti-Black rioting began.

This atrocity resulted in 34 deaths. Seven Black people were killed by racist police who often attacked and arrested the Black victims of mob violence.

A cop yelled, “I ought to shoot you!” at African American Joseph Scott after 25 whites had nearly killed him. None of the whites who attacked Scott on a streetcar were arrested. Instead, Scott was struck repeatedly by cops and thrown into a police wagon.

Horace Jennings was left wounded in the street by racists only to be asked by a policeman, “Where’s your gun, you Black son of a bitch?” The cop then swung his billy club at Jennings’ head, leaving the Black man unconscious.

Only after several blood-soaked days did the capitalist class decide to call in the National Guard to stop the anti-Black riot.

The capitalists acted partly because the shooting wasn’t all one-way. African Americans were arming themselves in self-defense. While 23 Black people were murdered, 15 whites were sent to the morgue as well.

The Chicago race riot didn’t occur in a vacuum. Seventy-six African Americans were lynched in 1919. At least 13 were veterans. More than 50 cities had anti-Black riots.

The week before Chicago erupted, as many as 39 people were killed in the Washington, D.C., riot. Carter G. Woodson, the father of Black History Month, barely escaped harm as he saw a white mob shoot a Black man to death.

In September, the 14-year-old future actor Henry Fonda witnessed the African American Willie Brown being hanged and shot in Omaha, Neb. A white mob tore down the courthouse and tried to hang the city’s mayor, Edward Smith.

The worst massacre was in Phillips County, Ark., near the city of Elaine. Hundreds of Black sharecroppers and their families were slaughtered.

None of these atrocities was spontaneous or accidental. Capitalist newspapers played a major role in whipping up racist violence.

The Washington Post called for racist soldiers to assemble and conduct a “clean-up” against Black people. The Omaha Bee helped incite the murder of Willie Brown by printing sensational articles about rapes and attempted rapes that never occurred.

Racist filth poured from the top of capitalist society. Four years before 1919, President Woodrow Wilson had the first Hollywood blockbuster ― ”Birth of a Nation” ― shown in the White House. The movie quotes Wilson on a title card praising “the great Ku Klux Klan.” The Ku Klux Klan used this viciously racist movie for decades as a recruiting film.

A free pass for racist terror

In 1919, the wealthy and powerful needed to pour even more poison into the white poor. The shock waves sent out by the Bolshevik Revolution were felt all over the earth.

The Hungarian Soviet Republic was proclaimed on March 21, 1919. The Communist International was founded the same month.

Revolutionary ferment wasn’t confined to Europe. In February, W.E.B. Du Bois organized the first Pan-African Congress. The May 4th Movement of Beijing students in 1919 was the beginning of the Chinese Revolution.

The speculators at Chicago’s Board of Trade as well as the bankers on La Salle Street were more concerned about events closer to home. In 1919, over four million workers went on strike in the United States. One out of seven industrial workers walked a picket line.

Among them were 365,000 steelworkers who began their walkout on Sept. 22. The strike’s organizer was future communist leader William Z. Foster.

The strike was defeated with 18 strikers killed by police and private gunmen. But for weeks it shut down what was then the largest corporation on the planet, United States Steel, the crown jewel of the J.P. Morgan banking empire. (Now part of the JPMorgan Chase & Co. banking octopus with $2.7 trillion in assets.)

Twelve to fifteen thousand Black workers were employed in Chicago’s Union Stockyards, which at the time was the largest concentration of workers in the U.S. Much of the violence occurred around the stockyards, and Black packinghouse workers were prevented from going to their jobs for a week.

Swift, Armour and the other packers could have intervened to stop the racist mob violence. The Union Stockyards had its own private police force. Also, there were probably a thousand railroad cops in Chicago.

These forces could have escorted Black workers to and from their job. Just telling local shopkeepers and the white gangs that the slaughterhouse bosses didn’t want trouble could have dampened things.

The packers and the railroad companies did nothing. Eighteen years later, Chicago cops killed ten striking steelworkers ― six of whom were shot in the back ― in the 1937 Memorial Day massacre.

In 1919, the cops didn’t even try to break up the white mobs attacking Black people. They often aided them instead.

Sources: “Race Riot, Chicago in the Red Summer of 1919” by William M. Tuttle Jr.; “Red Summer, The Summer of 1919 and the Awakening of Black America” by Cameron McWhirter; “Organized Labor and the Black Worker 1619-1973” by Philip S. Foner.

Next: Bombings greet the Great Migration