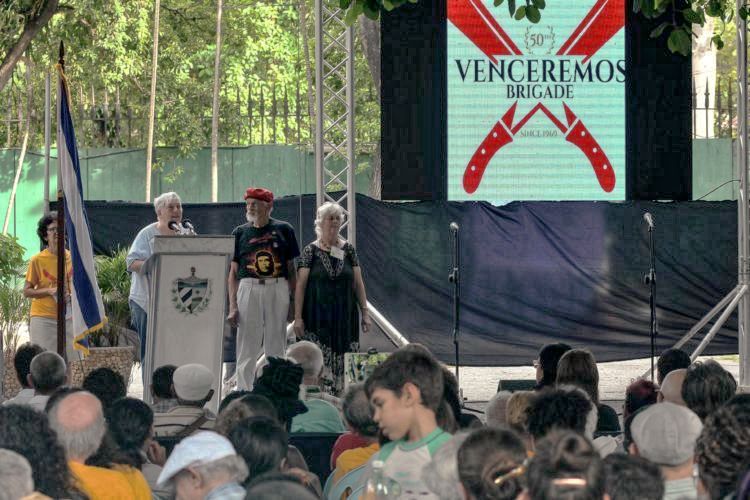 The 50th Venceremos Brigade to Cuba departed from Bayamo, capital of Granma Province, Aug. 8, on a sunny, warm, humid morning. Thus began the final week of the three-week celebration of the first International Solidarity Brigade with the Cuban Revolution half a century ago.

Already behind us is the official celebration on July 30 in the tree shaded courtyard at the Institute for Friendship with the Peoples. New and veteran brigadistas heard from Leslie Cagan, an early brigade founder; ICAP president and Cuban 5 hero Fernando González Llort; and reunited with old friends and comrades.

Behind us are the two weeks of working and learning at the rural Julio Antonio Mella International Camp. There, we picked the green beans that we ate for dinner, maintained the campgrounds and drank coconut water from coconuts opened with machetes. Behind us is our visit to the city of Camagüey.

Next, in Santiago, the African roots of the Cuban revolution, nation and culture are further explored. In Guantánamo, we will see and learn up close the damage done by the illegal U.S. occupation of the naval base straddling the entrance to the large bay.

In 1969, hundreds of youth from the U.S. anti-imperialist, anti-Vietnam war and Black Liberation struggles overcame the U.S. blockade. The brigades at that time traveled via Canada or Mexico, sometimes on converted cattle ships, to work alongside Cuban women and men.

This year, 2019, the brigade recognized—as Cuban President Miguel Díaz-Canel affirmed recently—that everyone who travels to Cuba today is breaking the blockade. So all 160 brigadistas departed and returned using the direct U.S.-Cuba flights from U.S. airports.

Veterans of the early brigades remembered their inspiration from international delegations, cutting cane with Vietnamese and Korean comrades, learning about the fight against apartheid in South Africa.

In addition to cutting cane, earlier brigades worked in citrus orchards and the construction of housing, schools and the Pan American games facilities. VB50 was welcomed into the Cuban homes constructed by earlier brigades, invited by the Committees to Defend the Revolution to share an evening of dance and song.

This 50th Anniversary Brigade program was a once-in-a-lifetime journey through Cuban history, traversing the country from the western provinces of Pinar del Río to the far eastern Guantánamo — the site of the territory illegally occupied by the U.S. Naval base and the torture chamber prison.

More than through distance, the 50th Venceremos Brigade reached back through centuries to the resistance of Indigenous people all but exterminated and the rebellions of Africans brought against their will to slave in mines and on sugar plantations.

In El Cobre—where VB50 shared the morning with a Committee to Defend the Revolution—a monument to the Cimarrón, or Memorial to the Rebellious Slave, reaches to the sky from a hilltop. The same noted Cuban artist who designed the stunning statue of Antonio Maceo at Santiago’s Revolution Square, Alberto Lescay, crafted this monument. He personally welcomed the brigadistas to his gallery for music and discussion. The powerful rebellion of Africans enslaved to mine copper here forced the Spanish Crown in 1831 to grant them freedom.

In honor and recognition of Cuba’s African roots, Cuba’s military aid to Angola that broke the back of white supremacist apartheid in South Africa, was named Operation Carlotta, for the martyred woman leader of the 1843 Triunvirato Rebellion in Matanzas.

Of special note was the visit to La Demajagua, the former plantation of Carlos Manuel de Céspedes, where, on Oct. 10, 1868, the plantation owner declared the enslaved African workers were free. Together they would be strong enough to free all of Cuba from Spanish colonialism — beginning the 10 Years’ War, which ultimately led to Cuban independence. This, in fact, is viewed as the beginning of the united struggle that culminated on Jan. 1, 1959.

How different from the U.S., where, in nearly 250 years since the U.S. Declaration of Independence, there has been no accounting for the original suppression of Indigenous people and accumulation of capital from the free labor of enslaved Africans. And no uniting of all to fight for the benefit of all, a foundation for real equity.

In Bayamo, VB50’s welcome in Céspedes Square included the recitation of important historical facts. The first declaration in Bayamo, in December 1868, following its liberation from Spain, ended slavery, reinforcing Céspedes’ appeal at La Demajagua. When the Spanish army retook the town, they found only ashes. The people of Bayamo demonstrated their revolutionary spirit, desire for independence and self-determination by burning their city to the ground rather than be subjugated again.

This is something that U.S. imperialism needs to bear in mind as it attempts to suffocate both Cuba and Venezuela. It is no accident that the Cuban national anthem after 1959 remained La Bayamesa. The lyrics and author are memorialized in Bayamo’s central square.

The cradle of the independence wars against Spain is the eastern Cuban provinces of formerly Oriente (now Granma), Santiago, Guantánamo, La Tunas and Holguín. But Santiago is also where the July 26, 1953, attack on the Moncada Barracks began the march to the Jan. 1, 1959, victory of independence.

A visit to the mangrove swamp, where the overloaded yacht Granma disembarked Fidel and some 80 other fighters, makes the physical hurdles recounted in books a reality previously unimaginable. Without machetes, carrying supplies and weapons, how did they make their way through the tangle of roots, branches and razor grass, brigadistas wondered?

A concrete paved road winds up the mountain to the national park entrance for a trek to Fidel’s mountain command post, the Comandancia de la Plata, and the tallest point in Cuba, Turquino.The concrete road was not there in 1956, more than doubling the length on foot or by donkey to the Comandancia.

As we switched out of our tour buses into smaller vans for the trip to the trail head, we received a special treat, a performance of the Rebel Quintet — a musical family who played and sang for the revolution. All, except for one who died recently and was replaced by a grandson, still wear their olive green uniforms and play their songs for the revolution.

The Moncada Barracks itself still bears the bullet holes from 1953. Now, in addition to a museum, it is a school where two thousand students study. The Latin American School of Medicine, where young doctors study, including some from underserved U.S. communities, is also a transformed military base.

Guantánamo is more than the prison

A fact emphasized to us more than once during our visit to Guantánamo province and its provincial capital, Guantánamo city: Guantánamo is more than a prison and more than the U.S. naval base. From two vantage points in Cuban territory we viewed the U.S. base. In Caimanera, a small Cuban town near the base, we watched All Guantánamo is Ours, a short video featuring the words of Caimanera residents, historians and students who describe the current and historic damage suffered by Guantánamo residents from the U.S. occupation of their territory.

We prepared to leave Cuba on Fidel Castro’s 93rd birthday. We remembered Fidel with workers at a pharmaceutical plant where we collectively unveiled portraits of Cuban heroes and martyrs in the main hallway. We placed flowers at the huge granite rock that holds Fidel’s ashes, but isn’t large enough to represent the vision and example that another socialist world is possible, is winnable. We have work to do.

Join us at the international anti-imperialist conference, Nov. 1-3 in Havana, Cuba.

And mark these dates: Nov. 6, when the United Nations General Assembly votes to condemn the U.S. blockade; March 2020, the National Conference in New York City to Normalize Relations with Cuba; and the 15th May Day Brigade and 51st Venceremos Brigade.