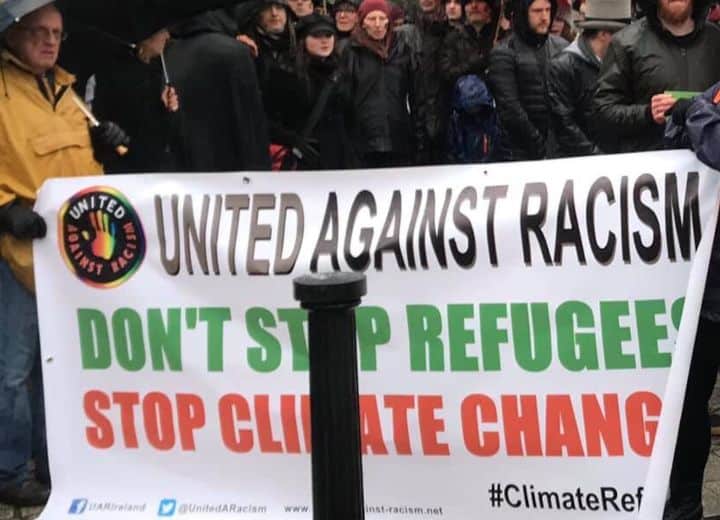 Millions of people have been horrified by the racist massacres in El Paso, Texas, and Dayton, Ohio. The El Paso shooter’s hate manifesto echoed Trump’s anti-immigrant rants and those of Tucker Carlson at Fox News.

What can stop U.S. Nazis from shooting Latinx people in El Paso, Black people in Dayton or Jewish people in a Pittsburgh synagogue?  LGBTQ2S people were massacred in Orlando, Fla., and Sikh people were killed at their Oak Creek, Wis., temple. Muslims have been targeted across the United States.

At least 11 people have been killed in attacks on abortion clinics.

U.S. history is a record of racist violence.  Nearly 20 Chinese people were lynched in Los Angeles in 1871 and another 28 were murdered in Rock Springs, Wyo., in 1885. The 1890 massacre at Wounded Knee of at least 250 Lakota Sioux children and adults by the U.S. Army was a mass shooting too.

The Texas Rangers killed 300 Mexican Americans just in 1915 and 1916. In Louisiana, 150 Black people were massacred in Colfax in 1873, and another fifty were killed in 1887 in Thibodaux during a strike.

The capitalist government, which regularly commits atrocities, will not save us. As terrible as the recent massacres have been, many more people have been killed by racist police.

Last year, 1,164 people in the U.S. were killed by the cops. The police have slain more than 5,000 people since Michael Brown was killed in Ferguson, Mo., five years ago.

Black people are three times as likely to be killed by police as whites. Less than one percent of these killer cops are ever convicted.

While the Nazis in Hitler’s Germany wore brown uniforms, in the United States of Trump they wear blue uniforms with badges. The virulently racist Facebook posts by Philadelphia cops show that police departments serve as a recruiting pool for the Ku Klux Klan and other hate groups.

That’s another reason to abolish them.

This isn’t disrespecting those security guards and other armed individuals who have stopped massacres. Black security guard Stephen Johns was killed in 2009 preventing Hitler worshipper James von Brunn from killing dozens of people at the Jewish and Roma Holocaust Museum in Washington, D.C.

Von Brunn had been a best buddy of ex-Rear Adm. John Crommelin, who belonged to the super racist National States Rights Party. This terrorist organization was linked to the deaths of the four little girls in Birmingham, Ala., at the 16th Street Baptist Church in 1963.

Their gun control and ours

Real gun control begins with taking the guns away from killer cops and abolishing the police. Real community control means being able to protect your neighborhood.

Capitalist gun control has almost always targeted the working class. In the 19th century, armed militias belonging to workers’ organizations were banned by the Illinois state Legislature. The Pinkertons and the other gunmen belonging to detective agencies that regularly killed workers during strikes were untouched.

New York City’s century-old Sullivan law banning most firearms served as an excuse for the racist Stop-and-Frisk program. Hundreds of thousands of Asian, Black and Latinx people, largely youth, had their Fourth Amendment right against illegal search and seizure violated by the cops.

Congress didn’t outlaw tommy guns after the 1929 St. Valentine’s Day massacre in Chicago’s Clark Street Garage. They were banned by the feds only after their effective, nonlethal use in the 1934 Minneapolis Teamsters’ strike.

In 1967, Ronald Reagan and the California Legislature prohibited people from carrying unloaded shotguns, a measure that was aimed at the newly formed Black Panther Party for Self-Defense.

Pouring in guns and drugs

But what about the murder rate in cities like Baltimore or Chicago? Guns—like drugs—are poured into Black, Indigenous and Latinx communities.

Millions of people know that crack was funneled into Los Angeles and then the rest of the U.S. by the CIA to pay for their contra terrorists attacking Nicaragua. The journalist Gary Webb was driven to his death for exposing this real conspiracy.

The drug trade also means massive profits for the banks that launder the money. Wachovia Bank, which was gobbled up by Wells Fargo, was fined $160 million for laundering. Barclays and at least eight other banks were also fined for laundering drug money.

The capitalist state knew that crack cocaine and increased drug pushing would cause murders to skyrocket. They spent 20 years trying to drive Black and Latinx residents out of New York City as part of “planned shrinkage.”

Upon orders from Wall Street bondholders, Mayor Abe Beame fired 50,000 municipal workers in 1975. The Bronx was allowed to burn as the fire department suffered budget cuts.

In 1990, 2,245 people were murdered in New York City. Nobody should believe that it was the New York Police Department’s Compstat statistics program that reduced killings.

The city’s massive gentrification required that the murder rate go down. In the meantime, the surge of murders and drugs served as an excuse to jail hundreds of thousands of more people.

What will stop the violence is people organizing themselves and demanding jobs for young people and a $20 minimum wage. There are no mass shootings in socialist Cuba because the Cuban people are organized into unions, womens’, youth and community organizations, as well as in the Communist Party.

In the U.S., groups like Copwatch monitor the police and have inhibited some of their violence. People in Nashville formed a human chain to stop U.S. Immigration and Customs Enforcement from kidnapping their neighbor.

That’s like what the people of Boston did in the 1850s to stop the slave catchers after the Fugitive Slave Law was enacted.

Community patrols against police brutality and deportations need to be expanded with the support of a rising labor movement. Stopping police violence and deportations go hand-in-hand with organizing unions at Amazon and Walmart.

A mass movement is needed to bring millions of prisoners home to their families and to good paying union jobs.

The growing struggles sure to break out in the U.S. will lead to millions of people waking up and ultimately taking control of their communities. An organized people will stop the racist terrorists and get rid of all the Trumps.