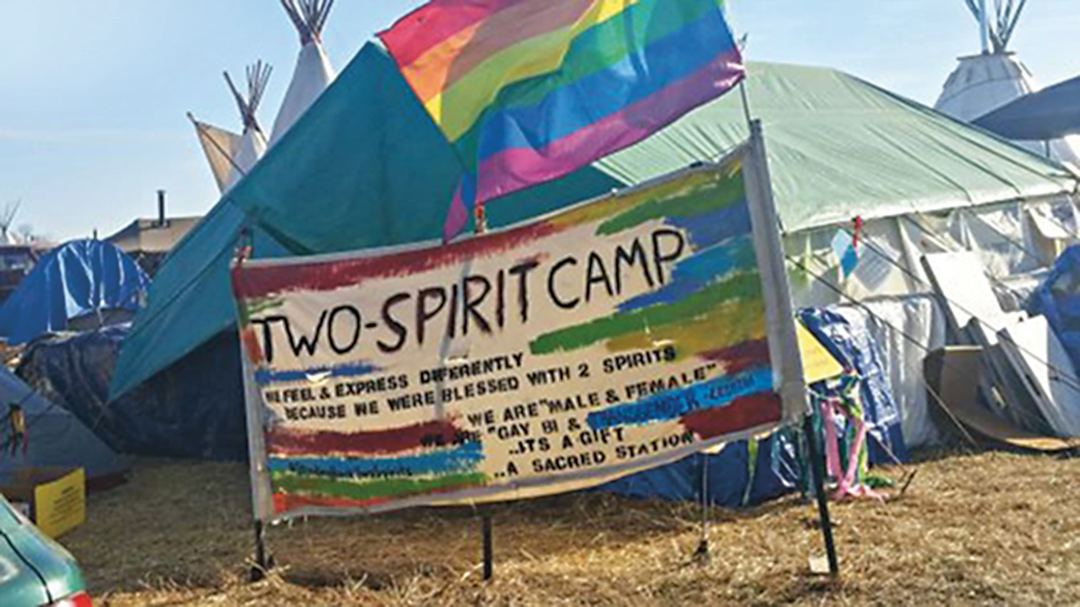 Perhaps you have heard the term “Two Spirit” used along with lesbian, gay, bisexual, transgender and other terms. If you are not Indigenous, this may have made you think that “Two Spirit” refers to Indigenous people who are lesbian, gay or bi. But being Two Spirit does not necessarily mean that someone is lesbian or gay since it does not refer to sexual preference.

“Two Spirit” is a pan-Indian umbrella term that describes Indigenous people who have mixed or non-binary gender roles. The term first began to gain popularity in the late 1980s and is now used widely throughout Canada and the U.S., and other Indigenous people, such as the Zapotec in Mexico, also recognize the concept.

While the term is relatively new, the concept has existed among hundreds of Indigenous Nations for thousands of years. Some Native Nations have terms for up to 4 or 5 different genders, for instance. Two Spirit people are considered to be nonbinary and to hold sacred elements of both feminine and masculine within them.

These Indigenous understandings came long before and exist outside of the “LGBTQ” terminology that is often used now. A Two Spirit person may be lesbian or gay, but being lesbian or gay does not necessarily make someone Two Spirit.

Two Spirit people have existed for thousands of years. Many tribal nations understood that there were people who were not part of a male/female binary. In fact, some nations believed that there were multiple genders, not just two.

Traditionally, in many tribal nations, Two Spirit people were held in high esteem. They were leaders, warriors, medicine (spiritual) people. They often played a special role with youth, including adopting children and giving special sacred names to babies.

When the Christian Europeans invaded, however, they held Two Spirit people in extreme contempt. Two Spirit people were often killed or forced to hide who they were. The Christian missionaries did their best to teach Indigenous people that being Two Spirit was sinful and wicked, and settler colonial laws and customs forbade the existence of people who were not specifically male or female.

Because of this repression, more and more Native people turned away from their ancient understandings — but not all. However, it became more difficult for Two Spirit people to be who they are, and in many places they had to function in an underground way.

By the 20th century, some Two Spirit people from reservations left for the cities where there were lesbian and gay communities. Some of them founded urban Native groups, such as Gay American Indians (GAI) in San Francisco, and many of them faced anti-Indigenous racism in the cities, as well. Sometimes white people even told them that Native people could not possibly be lesbian or gay or Two Spirit due to some bizarre stereotypical views held by non-Natives. It could be difficult for Two Spirit people to feel completely at home anywhere.

But increasingly, more and more Two Spirit people have let their families and tribes know who they really are. If they are not treated with respect, they challenge this, especially when it was their own tribal tradition to honor Two Spirit people.

With leadership provided by people like Candi Brings Plenty, this was a very important step forward in the overall Native struggle. When some Native people at camp were not accepting of them, others strongly challenged this and reminded everyone of their traditional cultures.

Sometimes non-Native people refer to themselves as Two Spirit. That is disrespectful, since it is an appropriation of a distinctively Indigenous concept and term.

During this month of June 2019, and throughout the year, Pride parades and powwows will celebrate Two Spirit people, from Saskatoon to the Bay Area to the Navajo Pride Parade. Honoring Two Spirit people is an important part of decolonization — washing settler colonial ideas out of our brains and returning to deeper understandings that existed long before the rise of patriarchy, capitalism, settler colonialism and the European invasion of Indigenous lands.