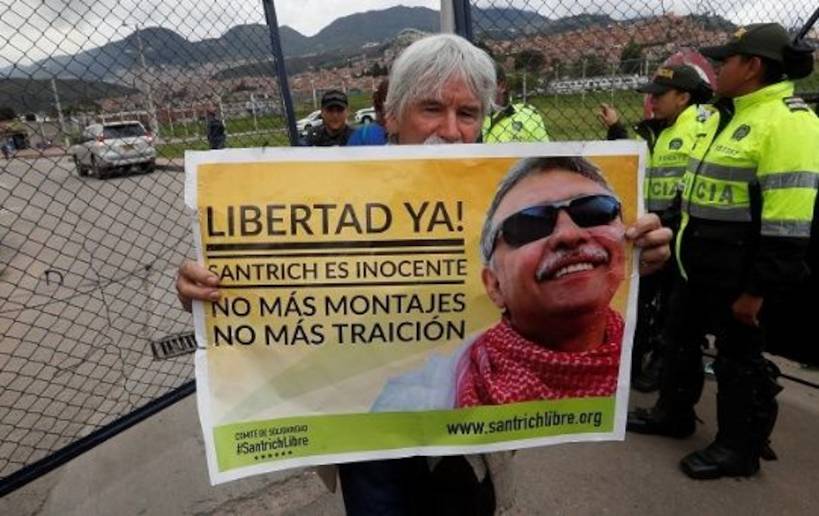 “My battle is a ‘homeland or death’ battle, of gratitude to life; a battle in order to uphold dignity. Only cowards surrender and betray. When the difficulties get worse, the real revolutionaries fight to the death.”
— Jesús Santrich, April 11, 2018

The safety and well-being of a leading and respected figure in the Colombian revolutionary movement — Jesús Santrich — is now surrounded in mystery. After a year in prison, Santrich was released from jail in a semi-conscious state on May 17 and then rearrested within minutes. His health is said to have worsened after being put back in jail.

Explanations vary. His jailers first reported his condition to be the result of a suicide attempt, but there are reports that he suffered beatings before his release and again after his rearrest, and still others indicating a heart attack, or perhaps even poisoning by his captors.

Santrich had been sent to La Picota prison in Bogotá in April 2018 based on sham charges from the Southern District Court of New York that he had tried to traffic cocaine into the U.S.

In 2016, as part of an agreement between the Revolutionary Armed Forces of Colombia-People’s Army (FARC-EP) and the Colombian government, signed after long negotiations in Havana, a tribunal called the Special Jurisdiction for Peace (JEP) was set up.

Among the many components of the agreement, there was to be broad immunity for those who participated in the 50 years of civil war, and no extraditions would be allowed as punishment for anything that occurred before the agreement was signed.

It was this tribunal, the JEP, that rejected the bogus charges by the U.S. and finally ordered Santrich released more than a year after his arrest. His immediate rearrest was most certainly at the behest of Washington.

Colombian President Iván Duque and former President Álvaro Uribe are both close allies of the U.S. and are leading a right-wing campaign against the 2016 agreement, which they view as being too soft on the former guerrilla fighters.

Santrich was one of the leading negotiators who represented the FARC in talks that led to the agreement with the Colombian regime.

He fought hard in the negotiating sessions for improvements in the rural areas where the FARC’s 20,000 fighters had driven out the military and death squads and defended campesinas and campesinos from right-wing paramilitaries. For a long time, the FARC held territory equal to the size of Switzerland.

The FARC’s goal was to build a socialist society in the South American nation of 38 million. But from 1999 until the agreement was signed, the reality that their struggle was, in fact, a war with U.S. imperialism was more clear than ever.

Under “Plan Colombia,” initiated by the Clinton administration, the U.S. and allies sent billions of dollars, mostly used to train and equip the Colombian military. Its stated goals were to end violence on all sides, and promote economic development in order to stem the flow of cocaine.

But while the war against the FARC and a second Colombian guerrilla organization, the National Liberation Army (ELN), was stepped up, when it came to paramilitaries and death squads funded by U.S. corporations like Coca-Cola, the Colombian military and its U.S. backers looked the other way.

Deaths squads assassinated homeless people and targeted LGBTQ people in the cities. Paramilitary forces as well as the official military launched murderous campaigns against campesinas and campesinos that they saw as sympathetic to the guerrilla fighters, along with rural Afro-Colombian and Indigneous communities.

Since 1992, 51 journalists have been assassinated in Colombia, with 39 of those murders carried out with impunity. Colombia has also earned the dubious distinction of being the most dangerous country in the world for trade unionists.

Under the 2016 agreement, the FARC (Revolutionary Armed Forces of Colombia) dissolved as an army and refounded itself as FARC (Alternative Revolutionary Force for the Common People), a civilian electoral party.

In exchange for the rebels disarming, the government agreed to the institution of the Special Jurisdiction for Peace (JEP,) and what was supposed to be a broad immunity or amnesty. The former guerrillas were guaranteed 10 seats in parliament, and Jesús Santrich was to have one of them. They were also able to run candidates like any electoral party.

Santrich and others at the Havana talks also wrested commitments from the government for a variety of rural development projects, including universal education from preschool through secondary school, access to clean drinking water and extensive infrastructure projects. Since the agreement was signed, none of these promises has been fulfilled and violence against progressives has increased — particularly against progressive candidates, many of whom are former guerrilla fighters from the FARC.

It’s no wonder that Santrich has been targeted by imperialism. His roots in the communist movement are deep and go back decades. He was a member of the Central Staff of FARC’s army, considered one of its most important leaders, led their communications and propaganda efforts, and was a proud admirer and close ally of President Hugo Chávez while the U.S. fumed at Chávez’s popularity in neighboring Venezuela.

Solidarity messages and demands for Santrich’s release have come from the leadership of the ELN, from Cuba, from organizations throughout the Caribbean and Latin America, from Sinn Fein of Ireland and many others.

It is time for progressive people — especially in the United States — to close ranks with the Colombian people’s struggle and call for freedom for Jesús Santrich!