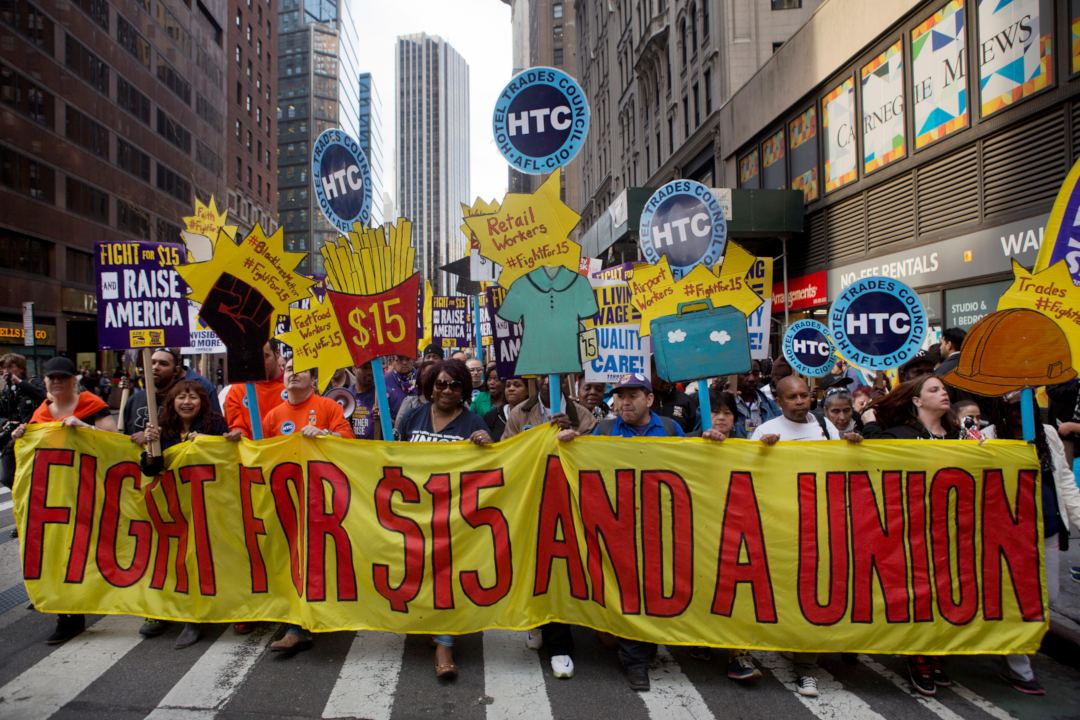 Trump supporters and the capitalist media are celebrating April’s employment report by the Bureau of Labor Statistics. They claim this is the best jobs picture since 1969.

What’s the real story? The drop in the official unemployment rate to 3.6 percent wasn’t just because there were an estimated 263,000 more jobs.

“There was also a big drop in the number of people who said they were looking for work. The labor-force participation rate, which measures the share of those 16 and older who are employed or seeking work, sank to 62.8 percent, from 63 percent.” (New York Times, May 3)

This isn’t because people don’t want a job. The official unemployment rate hides how many people are actually jobless.

As the Quartz website points out, “If the U.S. unemployment rate included everyone who says they want a job, it would be nearly double.”

Forbes magazine — its motto is “the capitalist tool” — also admits this:

“Imagine that the current labor force participation rate were still at its January 2007 mark: i.e., 66.4 percent and not 63 percent. That would add almost 9 million willing workers. Putting those individuals into the labor force today but adding no more jobs than we actually have raises unemployment from 3.6 percent to 8.5 percent!”

Even during the current phase of capitalist “prosperity,” 40 percent of people can’t afford a $400 emergency payment, like for a medical crisis or to repair a car. And one-out-of-four people has no retirement savings.

Twice as bad for Black workers

The official unemployment rate for Black workers is 6.7 percent, over twice that of the white jobless rate of 3.1 percent.

So 154 years after the Civil War, the U.S. racist standard that Black workers have it at least twice as bad as white workers is still in effect.

A. Philip Randolph, who organized the Brotherhood of Sleeping Car Porters and initiated the 1963 Freedom March in Washington D.C., noted that Black poorhouse rates in New York City were twice as high as whites during the 1830s.

At the peak of the capitalist economic cycle, the best Black workers can hope for is to be in a recession. That’s what a 6.7 percent jobless rate is.

The rest of the time for African Americans is an economic depression.

It’s even worse for Indigenous workers, whose unemployment rate was 7.8 percent in 2017.

The jobless rate of Latinx workers was a third higher than that of whites. As incomplete as the Black employment figures are, jobless Latinx workers are often not even counted, especially those who are undocumented.

This massive discrimination is a tremedous weapon for the bosses, who use it to divide workers and extract more profit. Keeping African Americans out of Southern textile mills until the late 1960s, helped keep out unions, too.

Why can’t everybody have a job?

The current economy is about as good as it will get for poor and working people. And it’s not going to last.

Frederick Engels, the friend and co-worker of Karl Marx, described what will happen: “The industrial trot breaks into a canter, the canter in turn grows into the headlong gallop of a perfect steeplechase of industry, commercial credit, and speculation, which finally, after breakneck leaps, ends where it began — in the ditch of a crisis.”

The economic disaster that Engels described has occurred every 10 years or so since the first world capitalist crisis in 1825. That’s because private ownership and capitalist competition prevent an overall economic plan.

Ultimately, too many items and services are produced than can be sold at a profit ― even if millions of hungry and homeless people desperately need them.

Because of economic planning, nobody was unemployed in the socialist Soviet Union.

The labor and peoples’ movements need to fight for a 30-hour workweek and a massive jobs program for young people. A job is a right!

Only a socialist revolution can guarantee jobs for all.