Fourteen people were arrested on Jan. 7 on the Gidimt’en clan territory that is within the homeland of the Wet’suwet’en Nation in what is called “British Columbia” by the Canadian settlers.

Elders were at the Gidimt’en checkpoint, women holding eagle feathers against the guns and hard faces of the Mounties as they invaded. The media were blockaded for hours, all electronic communications cut off.

As the militarized Royal Canadian Mounted Police (RCMP or “Mounties”) continued their invasion, they headed toward the nearby Unist’ot’en territory — another of the clans with hereditary chiefs within Wet’suwet’en.

The Unist’ot’en chose to bring down their blockade temporarily out of concern that the unarmed people there would be hurt, vowing to continue to resist the Coastal Gaslink pipeline and all of the pipelines slated to go through Wet’suwet’en territories.

The “crime” that led to the RCMP raid was the resistance of the five traditional clans of the Wet’suwet’en Nation to TransCanada’s Coastal GasLink pipeline. Their stolen lands are unceded, not subject to any treaty, and they do not consent to the destruction of their lands. Canada fundamentally seeks to exploit and destroy the lands and protect corporate profits.

Across Canada, Indigenous people and allies have come out to defend the Wet’suwet’en. They delay traffic on streets and highways, march, and demand that Canada back down from its doomed and destructive love affair with oil and gas extraction.

Pipeline fighters have confronted Canadian Prime Minister Justin Trudeau directly, calling him a liar and making it difficult for him to attend some of his meetings. The Union of British Columbian Indian Chiefs has strongly condemned the RCMP’s tactics of “intimidation, harassment, and ongoing threats of forceful intervention and removal of the Wet’suwet’en land defenders from Wet’suwet’en unceded territory.”

Outside Canada, what is happening in Wet’suwet’en homelands is not as well known. Yet actions have taken place in some U.S. cities, including New York, San Francisco, Seattle, Boston and other locations, and internationally, too.

This is another pivotal moment in the centuries-long defense of Indigenous sovereignty. Wet’suwet’en must be defended from the incursions of settler governments and corporations, just as the sovereignty of Standing Rock was defended in the #NoDAPL struggle.

Following the invasion of Gidimt’en and the arrests there, Wet’suwet’en chiefs entered negotiations with the RCMP under duress.

An agreement made to let Coastal Gaslink and the RCMP come onto Unist’ot’en territory in return for Wet’suwet’en members having full access to their territory was only supposed to be temporary, until a court hearing could take place. The RCMP has violated the agreement by establishing a police detachment on Wet’suwet’en territory without consent. As a result, solidarity actions need to continue to put pressure on Canada to back down.

Trudeau and his Liberal Party cabinet, as well as nearly all other elected officials in Canada, were silent when the RCMP raided. But make no mistake: the RCMP moved in with the full backing of Trudeau.

Although people in the U.S often think of Mounties as being rather cute and quaint, like the old cartoon character Dudley Do-Right, in fact, they are serving the Canadian government and corporations that seek to roll over Indigenous First Nations and their right to have the final say over what development will happen on their lands.

The RCMP was created as the North West Mounted Police in the 19th century to fight, kill, remove and imprison Indigenous peoples in western Canada and to suppress their ceremonies and cultures. Mounties continue to repress Indigenous resistance to this day. 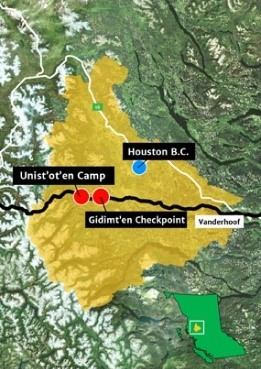 Trudeau’s dealings with First Nations people are characteristic of the two faces of liberalism. On the one hand, he seems to be a caring young leader who loves to dress up in Indigenous garb and says he supports Indigenous people and reconciliation.

But then his other face is revealed: the ugly face of capitalism and settler colonialism. The right of Indigenous nations to “free, prior and informed consent” was one of Trudeau’s campaign promises, but in practice he and his government have not cared about consent since Canada’s economy is so heavily dependent on gas and oil.

TransCanada is also funding the Keystone XL and Energy East pipelines that have faced widespread opposition.

The raided Gidimt’en checkpoint had only recently been established in solidarity with the longtime Unist’ot’en checkpoint, in place since 2009. The Unist’ot’en camp contains permanent structures erected in the path of multiple proposed pipelines. These buildings provide a place for people to stay and a barrier to protect the land and water, and also provide a place where people can come to heal at the land-based treatment center.

Fracked gas and tar sands pipelines have been planned without consent from the Wet’suwet’en’s five clans. They have never surrendered their lands or signed any treaties for their traditional territory, spanning 22,000 square kilometres in northwest British Columbia.

The Wet’suwet’en Nation has resisted the arm-twisting of corporations and the Canadian government. First Nations have often been subject to coercion, including incentives such as job creation and threats to cut off or divert desperately needed funds if consent is not given.

Canadian law had previously recognized the rights of the Wet’suwet’en hereditary chiefs and five clans, in addition to recognition of the government-sanctioned “Indian Act” band council chiefs. A Supreme Court of Canada ruling confirmed the land’s unceded status in 1997. Nonetheless, the British Columbia Supreme Court recently decreed that Coastal GasLink lines could pass through their lands.

More important, though, the Wet’suwet’en have their own laws. Their laws and systems of governance predate Canada by thousands of years. The people are the final word, not Indian Act band council chiefs.

Unist’ot’en spokesperson Freda Huson said: “I’m here now because this is my home, this is where I live. … The gate is for our protection. We had racists coming in and shooting rifles, ramming my gate with vehicles, and using explosives to blow up my gate. …

“All I am doing is living on my lands that my clan has title and rights to. You say reconciliation? This is not reconciliation. You’re treating my chiefs and us as criminals. We’re not criminals. This is our land.”

How you can support the struggle: Increase awareness of what is happening by posting on social media and attending and organizing actions in your area. Here is a list of Canadian embassies and consulates worldwide. Let them know that people everywhere support the Wet’suwet’en struggle.

Five terms to know regarding the Wet’suwet’en pipeline dispute