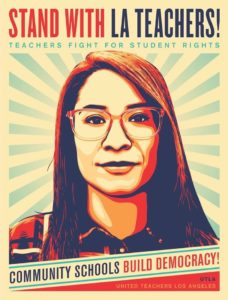 Los Angeles — All eyes are on the impending strike by United Teachers Los Angeles (UTLA).  As in the rest of the U.S., teachers and other school workers are underpaid and public schools are in shambles.

The Los Angeles Unified School District (LAUSD) and Superintendent Austin Beutner are crying poverty and using every anti-union trick in the book, including the courts, to avoid meeting the just demands of the 33,000 teachers, nurses, librarians, social workers and counselors.

The district also claims to have hired 400 strike-breakers.

As the clock was ticking down, UTLA leaders went to court Jan. 8 to try and fend off a delaying tactic designed to weaken the momentum of the strike. The strike deadline has been set for Jan. 10, but district officials now claim that the union didn’t provide proper notice, so the deadline should legally be Jan. 14.

Because the court still had not ruled on Jan. 9, the union decided to officially delay the start of the strike to Monday, Jan. 14, to avoid confusion for workers, students and parents.

Earlier, Beutner lost a bid to force special education teachers to work in the event of a strike.

LAUSD is the second-largest public school district in the country, with 900 schools and 640,000 students. The growth of charter schools in Los Angeles has decimated state funding.

Charter schools – overwhelmingly not unionized and unregulated — receive public funds but are allowed to “cherry pick” the students that they accept. This leaves behind a disproportionate number of students of color, children with special needs, and children from low-income households, effectively re-segregating public education.

This pattern has been replicated in most major cities, as a campaign funded by right-wing billionaires with the aid of both Democratic and Republican politicians has rolled across the country.

While the teachers’ strikes that quickly spread to five states last spring helped to enlighten millions of people in the U.S. about the low wages of teachers and bad conditions in public schools in much of the country, the data is still shocking.

LAUSD’s student population suffers unbelievable poverty. According to LA School Report, there may be up to 21,000 homeless students in L.A. public schools.

While there are funds for a special school police force and plenty of armed cops in schools, the severe lack of counselors, social workers and nurses adds to the many crises that poverty imposes on thousands of Los Angeles families. According to UTLA, the student-to-nurse ratio is 1,224 to 1, and the student-to-counselor ratio is 945 to 1.

Teresa Chuc, a 13-year public school teacher, spoke of the conditions she has seen in an interview with Truthout:: “I was teaching at Harrison Elementary/Middle School in East Los Angeles. It was a year-round school, and my classroom was in the bungalows overlooking the asphalt playground and Interstate 10 freeway.

“I learned that the bungalows had been condemned and reopened five times, said Chuc. “When I turned on the water of the drinking fountain, the water was brownish-yellow and there was debris coming out of the water.”

She continued: “My current high school students have desks from around the 1980s, and sometimes a student will sit at their desk and the whole desk will fall apart.”

At the end of negotiations on Jan. 7, there was no substantive breakthrough on wages. UTLA is calling for 6.5 percent wage increase retroactive to July 1, 2016. The increase of 6 percent offered by the district is contingent on a decrease in health and retirement benefits for people hired in the future, and is not retroactive to July 1, 2016, as the union demands. UTLA negotiators are refusing to back down.

But the union is also fighting hard on issues that affect the community and their students – smaller classroom sizes, more nurses, librarians and counselors, and oversight of charter schools.

Because Los Angeles public teachers and staff have made these issues central to the negotiations and are digging in, they have won much community support in addition to union solidarity.

“This is a national issue,” said Carbajal. “I’ve organized teachers across the country and seen the defunding of education. We must say no and give the students the tools they need to become critical thinkers who can change the world.”

Ingrid Villeda, a Los Angeles teacher and UTLA member, said: “We have seen an increase in people of color in our schools corresponding to a decrease in funding. LA district has a majority of Latino students. The data says that they are not interested in my students.”

Forum organizers offered ways that people in the community could aid the strike and gave quantities of handouts to volunteers.

Some who attended were members of Service Employees Local 99, which also represents education workers in Los Angeles. They said that their local was discussing the possibility of carrying out a sympathy strike. As Struggle★La Lucha wrote previously, the California School Employees Association, another union representing LAUSD workers, wrote an open letter to the district asserting their right to do so as well.

International Longshore and Warehouse Union Local 63, which represents workers in the ports of Los Angeles and Long Beach, has been reaching out to its membership and the community to encourage people to “adopt a school” by picketing along with teachers, bringing food and drinks, and helping to build support in any other way possible.

On Dec. 15, some 50,000 UTLA members, students and union supporters marched through downtown Los Angeles and displayed the new awareness of the plight of education workers. Now there are rallies scheduled for January 10 and 11 by UTLA and the “Red for Ed” movement – public educators that coalesced in the aftermath of the 2018 teachers’ strikes.

No doubt, they will send one more powerful message to the right-wing, union-busting billionaires who want to destroy public education in the U.S.: UNION POWER!