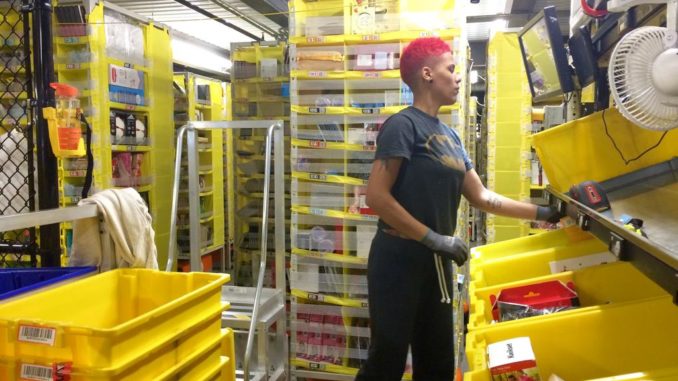 First, a little bit about my background. I worked at a garment sweatshop when I was a teenager, piecing together pockets on raincoats, and later on a General Motors assembly line installing power window regulators until the energy crisis layoffs in the 1980s.

I worked at a food producing plant for 15 years — first as a packer on the assembly line, then as a machine operator, and at one point as a forklift driver.  All of the jobs there were unionized.

I’ve recited this history to illustrate my familiarity with physical labor, speed-ups and assembly lines to contextualize my experience with contemporary conditions.

Why work at Amazon? For two reasons: first, I was retired and trying to live on just Social Security, so I really needed the money; second, to better assess the potential for organizing. Frankly, I also missed feeling of camaraderie that comes from being on the job with other workers.

It’s one thing to read about Amazon life or talk to friends who are working at Amazon; it’s another to walk, talk and breathe it.

I was hired at a Fulfillment Center (Amazon’s fancy name for a warehouse) that formerly was a GM auto plant where more than 1,100 workers had relatively good-paying jobs until it closed in May 2005.

This Amazon warehouse now employs over 3,000 workers. Approximately 1,500 additional workers were hired in October 2018 at another Amazon warehouse in the area, formerly the site of the historic Bethlehem Steel plant, as big as 13 football fields and once the largest steel mill in the country.

Approximately 5,000 Maryland workers labor at these huge sites along with two other Amazon warehouses: one where mostly part-time workers finish the last step of sending out products, and a smaller facility near BWI airport.

Younger workers would probably laugh at me for noticing this: the hiring process is faceless and driven by the Internet. There is no human resources department in the commonly understood sense. You apply online and take a kind of aptitude test, with no past work experience asked for or needed.

Qualifications? You must be able to walk six to 10 miles a day and lift 50 pounds —  they mean that, too. The only time you face off with a human being is when you take your saliva drug test with 40 to 50 other people.  If you pass the test, your start date arrives via email.

Waiting for the test and orientation gave me a chance to talk to other workers and make friends.

The majority were young. I believe only 3 of us, out of the 40 people in my group, looked over 50 years old. I was the oldest. About 80 percent were Black youth. The rest of those applying were white and a mixture of other nationalities: Latinx, Arab, Asian, etc. At least half were women. In other words, we looked like Baltimore. This cattle scene was repeated every hour as new hires went through the process.

One young woman, who told me she was 25 years old, was trying to get hired because of the pay. Her experience sums up why so many people are eager to get a job at Amazon.

She was still working at a Walmart warehouse for $11 an hour. Amazon was paying around $13. She didn’t really want to leave her old job, but she was taking care of her mother and desperately needed financial stability.

We were ordered to never, ever set foot, or for that matter swing an arm, into the taped-off area where the robots reside. We were told that the robots on the special robot floor do not have eyes and can accidentally kill us. Violating this rule meant immediate termination.  Only those with special skills can go into that area. They wear vests and carry around special laptops.

I felt like I was living in the TV series “The Colony,” about to be transported aboard a giant spaceship to be taken to the factory, or in Boots Riley’s film “Sorry to Bother You.”  OK, I’m sure Jeff Bezos, billionaire CEO of Amazon, would take issue. But then he’s never worked in his facilities.

My job is as a “picker.” The robots and the coordinated computer system certainly run my life, my body, and ultimately my 10-hour shift.

No one wants to be a picker. I met several new hires who only came back if they could find work in other departments. They claimed that more workers assigned to be pickers were fired than from any other job. Usually 50 percent of the new hires don’t make it. (I’ll have more to say on this in Part 2.)

Our common refrain is that Amazon is like a big prison, only we are able to go home and sleep at night. At this time of the year, we go to work in the dark and get off in the dark. For full-time workers in the Maryland warehouses, there is no such thing as the 8-hour day — only 10-hour and 12-hour shifts.