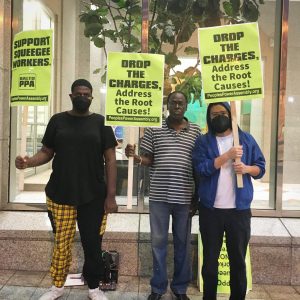 Peoples Power Assembly, together with the Prisoner Solidarity Committee and Youth Against War & Racism, has been holding demonstrations in defense of Tavon Scott Jr., a 15-year-old Black youth, who is alleged to have shot and killed a 48-year-old white man who attacked a group of squeegee workers with a baseball bat.

These organizations contend that self-defense against racism is not a crime and that the persecution of this Black youth is racist, riddled with double standards, and will serve to make an example of young Tavon and as a warning to Baltimore’s Black youth and workers.

Ahead of this case’s next hearing on December 20th, the Peoples Power Assembly will hold a demonstration and informational picket at the corner of Light Street and Conway Street, demanding: Justice for Tavon Scott Jr.! Drop the charges! Stop the attack on Black youth in Baltimore