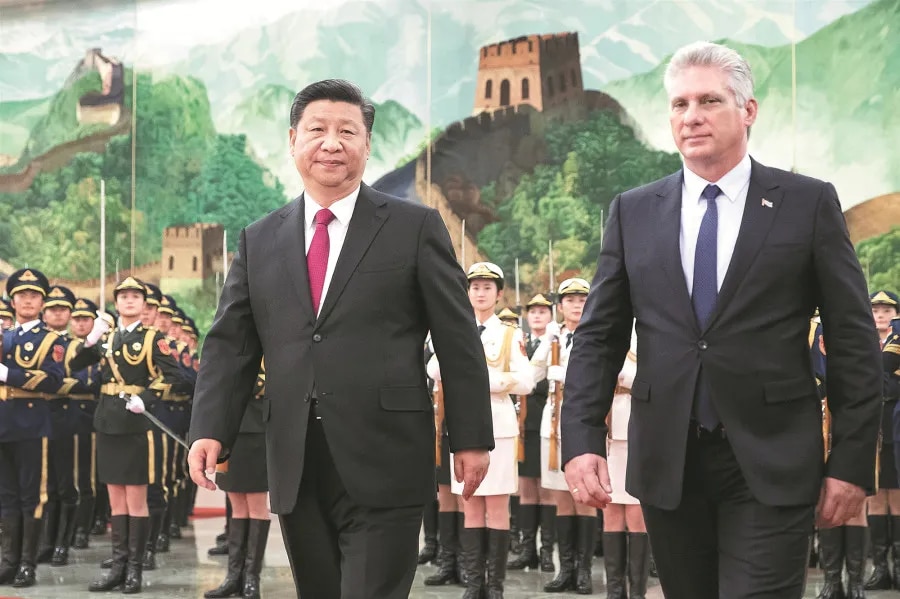 We are very pleased to publish below an interview with Carlos Miguel Pereira Hernández, Cuba’s ambassador to China, conducted by People’s Daily and published in Chinese on 13 October. The unabridged English translation has been provided to us by the Cuban Embassy in Beijing.

Noting that revolutionary Cuba was the first country in the Western hemisphere to extend diplomatic recognition to the People’s Republic of China – in 1960, just a year after the 26th of July Movement came to power – Pereira references the role played by Chinese immigrants in Cuba’s independence struggle. He points out that Cuba and China consider themselves “mutual referents in the construction of socialism with our own characteristics” and notes that President Miguel Díaz-Canel describes Cuba-China ties as “paradigmatic”, and President Xi Jinping describes them as those of “good friends, good comrades and good brothers”.

Describing the cooperation between China and Cuba fields in a vast array of fields, Comrade Pereira expresses confidence that the relationship will continue to deepen.

Relations between Cuba and China were made official on September 28, 1960, a formal step after the announcement by Commander in Chief Fidel Castro a few days earlier in front of more than a million Cubans, in the context of the historic First Declaration of Havana, to recognize the New China and rescind ties with Taiwan. That just decision was born of the political and popular will that have accompanied our relations throughout these 62 years.

The nascent Cuban Revolution definitively broke with the Monroe Doctrine and blind obedience to Washington, allowing Cuba to become the first country in the entire Western Hemisphere to establish ties with New China. We are honored to have made that modest contribution as one of the first manifestations of independence from our foreign policy.

The historical foundations and deep bonds of friendship between our peoples go back to the arrival of those first Chinese immigrants 175 years ago, who also had an outstanding and glorious participation in our struggles for independence.

Throughout these years of uninterrupted relations, Cuba has had the historic privilege of always being in the front row in promoting exchanges with China. Our relations represent a model of cooperation based on equality, respect and mutual benefit. We consider ourselves mutual referents in the construction of socialism with our own characteristics and on that basis, we carry out a broad and systematic exchange of experiences.

Our bilateral relations, as we reach the 62nd anniversary of diplomatic relations, are accurate and broadly in line with the definitions given in this regard by our top leaders. In the words of President Miguel Díaz-Canel, the ties between Cuba and China are paradigmatic, and President Xi Jinping has described our bonds as those of good friends, good comrades and good brothers.

The special character of our bilateral ties is a historic consensus, which reaches today an unprecedented solidity, by virtue of the high level of political mutual trust, the broad coincidence of positions in the international arena and the multidimensional and full development of our ties.

In the last two years, even in the midst of the pandemic, our ties continued to grow, the mechanisms of inter-party dialogue, government, parliamentarians and thus of various sectors, continued to strengthen in pursuit of coordination and cooperation both bilaterally and in international organizations.

It can be said that Cuba and China have been fraternal countries, which have supported each other on core issues and, above all, in difficult times. Since our official ties were established, Cuba has always shown its unequivocal support for the “One China” policy, and the firm rejection of any action that threatens China’s sovereignty and territorial integrity. For our part, we have counted on the sustained support from the Chinese government and people, and in particular, in our fight against U.S. blockade, which continues to intensify even in times of pandemic.

On September 24, in the framework of the 77th Session of the General Debate of the United Nations, State Councilor and Foreign Minister, Wang Yi, in a historic and unprecedented pronouncement, requested for the first time in that important scenario, the lifting and immediate end of the genocidal blockade policy. This transcendental support from China becomes a new milestone in our bilateral relations that ratifies the special and exceptional character of our ties, as well as mutual support on core issues.

Our ties have had a multidimensional growth, including the integral development of economic, commercial and financial ties. Despite the differences in terms of volume and productive capacity, the complementarity of our economies and the excellent political environment in which they develop, confirm the enormous potential to be exploited in this area.

Today, our ties cover almost all sectors of the economy of both countries. China continues to be Cuba’s second largest trading partner, a fundamental source of financing on favorable terms and the main technological supplier for the execution of projects prioritized for the economic and social development of our country.

China has also consolidated as the main market for our exports of goods. Sugar, nickel, rum and tobacco are emblematic products with great acceptance and demand in the Chinese market, for their good quality and recognition in the international market. New items have been added in recent years and others represent very promising prospects such as lobster, white and sea shrimp, coffee, honey and biotechnology products.

Likewise, we are inserted in new business models such as cross-border electronic commerce, through the creation of the Cuban Pavilion “Cuban Excellences” on JD.com Group platform. This has also been part of strategy of deepening our relations with China and a new milestone in bilateral cooperation, allowing the introduction of more Cuban products to this market, as well as a greater promotion of Cuba’s image, through its tourist and cultural resources.

It is worth mentioning as a milestone in our economic ties, the signing of the Memorandum of Understanding in 2018 and subsequently the Action Plan for the joint construction of the “Belt and Road”. Under this initiative, we hope to promote new projects linked to tourism, renewable energies, communications with the Digital Silk Road, health, biotechnology and science and technology.

Similarly, and taking into account that China promotes and encourages domestic consumption of high-quality products, we believe that the export of Cuban products to the Asian giant is also an area of potential for cooperation.

Another sector with promise is the export of Cuban medical services. In this regard, our exchanges with Chinese counterparts have transcended broad interests in cooperating in specialties such as oncology, ophthalmology, primary health care, health and wellness tourism and the possibility of applying the innovative products of Cuban biotechnology, which have great impact and recognition at the international level.

People-to-people exchanges are fluid and close, highlighting the close historical and cultural links. There is an increasing interest in Cuba to know the culture and language of China, while, to cite just two examples, the learning of the Spanish language and Cuban salsa, are gaining more and more followers in China. On the other hand, Cuba is a safe destination and could be the gateway for Chinese tourism to the Caribbean.

The relations between the Communist Party of Cuba and the Communist Party are forged on the basis of numerous affinities and consensuses, and also by the common challenge of building socialism based on different national realities, in the midst of a complex international situation characterized by growing unilateralism and the hegemonic attempt to impose on us the patterns and models of others.

The fluid inter-party dialogue throughout these 62 years, together with the frequent exchange of experiences in the construction of socialism, according to the conditions of each country, constitute essential pillars of the solid mutual trust that exists.

The recent exchanges between the party structures of both countries have been projected towards the implementation of the consensus reached between First Secretary Miguel Díaz-Canel Bermúdez and Secretary General Xi Jinping, from a face-to-face meeting they had in Beijing in 2018 and the two telephone calls held after the beginning of the pandemic.

This year we celebrate the virtual IV Theoretical Seminar between both Communist Parties that strengthens the practice of the exchange of experiences in socialist construction.  In this context, the messages of both leaders were relevant, ratifying the utmost importance that both countries attach to strengthening the Parties in pursuit of the consolidation of strategic communication and political trust at the highest level.

On the other hand, the Communist Party of China has been central to the achievements of the New China, so it is of great importance in the international arena, for socialist countries such as Cuba and for left-wing and progressive movements.

The CPC was able to innovate Marxist theory by adjusting it to China’s own characteristics, which constitutes a valuable contribution to the study, dissemination and promotion of Marxism in the twenty-first century. The process of “sinicization” of Marxism is an example of the application of materialist dialectics, achieving a socioeconomic model, whose successes are undeniable.  The feat of eradicating extreme poverty in China is a tangible demonstration of the accurate leadership of the party organization.

For Cuba, China constitutes a benchmark of the conquests of socialism in modern times, which, under the leadership of the Communist Party of China, has managed to overcome adversities and meet development goals such as the revitalization of the nation.

The strengthening of inter-party exchange will continue at the end of the XX Congress, because it will be a favorable moment to promote new spaces for bilateral dialogue, based on the exchange of experiences, consultation and support in regional and international forums.