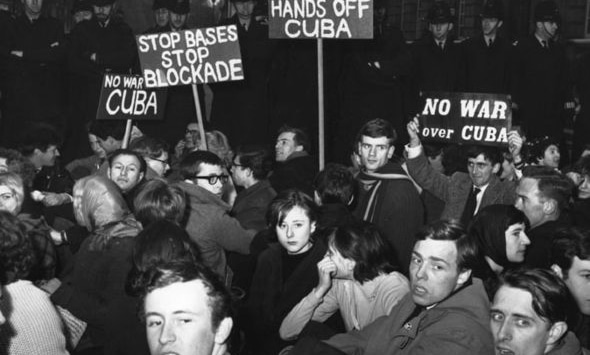 This October, Cuba remembers the installation of Soviet nuclear missiles in Cuba, a decision that triggered one of the worst crises of the so-called Cold War. For several days, the world was on the brink of a war with incalculable consequences, which showed the will of the Cuban people to defend their sovereignty at any cost.

Sixty years after the crisis, Resumen Latinoamericano takes a look back at the days of terror in which the world was on the brink of World War III in an unprecedented nuclear conflict.

It isn’t possible to understand the crisis without an in-depth analysis of the events in the US policy towards Cuba, which led to the presence of the missiles in Cuba.

The story goes back to 1959, when the Cuban Revolution led by Fidel Castro overthrew the US-backed dictator Fulgencio Batista and emerged as a new social justice paradigm, something Washington was unwilling to tolerate. Its new social and political initiatives put the island in the crosshairs of hostilities between Havana and the White House, a situation that worsened after the implementation of an agrarian reform, which included the nationalization of US-owned land and businesses.

The United States counter-attacked with a commercial, economic and financial blockade to prevent Cuba from buying or selling products. In this context, the newly born revolution declared itself socialist and had the Soviet Union as its main trading partner and ally amid the Cold War between Moscow and Washington.

On January 3, 1961, the then-President of the United States, Dwight Eisenhower, broke diplomatic relations with the Cuban government. Three months later, more than a thousand military personnel trained and paid by the US Central Intelligence Agency (CIA) invaded the Bay of Pigs in Cuba with the aim of overthrowing the revolutionary government. In less than 72 hours, the Cuban army thwarted their plans, an event that would go down in history as the first great defeat of US imperialism in Latin America.

In 1961, the arrival of J. F. Kennedy to the White House launched the most dynamic period of US diplomacy, a period of failures. The US administration’s revengeful spirit was born out of the humiliation suffered by the defeat of the US orchrastrated mercenary invasion. Cuba became a real obsession for Kennedy.

At the end of that year, Operation Mongoose was born, the biggest subversive plan orchestrated against Cuba from Washington, which was due to end with the direct military intervention on the island by the US Armed Forces in October 1962.

When Soviet intelligence (KGB) became aware of the plans, it offered the island to deploy missiles as a deterrent-defensive measure. However, Moscow had another interest in the background. In 1962, the US had installed a series of nuclear ballistic missiles called Jupiter in Turkey, capable of hitting Soviet territory within minutes in the event of a confrontation.

The proposal took Fidel by surprise. He didn’t want to accept at first, because of the risk it represented and because he didn’t want Cuba to be seen as a Soviet military base. After much thought, the revolutionary government agreed to accept the installation of the rockets under five conditions: that the United States lift the blockade, withdraw from the Guantanamo Naval Base, and put an end to pirate attacks, subversive activities, and violations of Cuban airspace.

The eyes of the world were on the island and Kennedy was beginning to feel a heavy pressure on his shoulders. He knew that the US people wouldn’t accept a nuclear conflict with the island, a war that would have been unleashed just because of his whim of wanting to subjugate the island. His chances for reelection were at stake, and it was then that he negotiated with Moscow the withdrawal of the rockets.

Cuba was excluded from the negotiations and its demands were ignored. Cowardly, the then-leader of the Soviet Union, Nikita Khrushchev, decided to accede to Kennedy’s request, and the missiles were dismantled over three weeks.

In an interview years later, Fidel stated that the island did not feel betrayed but very irritated and upset. “We think it was completely wrong. To exchange Cuba’s rockets for Turkey’s was immoral and unacceptable. Withdraw the rockets without discussing it with us beforehand was also wrong. I understand that there was a situation of great tension, of danger, but it was unacceptable to decide to withdraw the projectiles without consulting Cuba,” he said.

The island would not have objected, but “we would have demanded conditions. Khrushchev could have said he would withdraw the missiles if there were guarantees for Cuba. But this didn’t happen. The Guantanamo Base remained there, as well as the pirate attacks, the dirty war, the subversive plans. Everything remained,” he concluded.

The Cold War lasted until 1991, with the dissolution of the USSR. Kennedy was assassinated in 1963. Khrushchev died in 1971 at the age of 77. Neither witnessed the end of the conflict that almost led the world to disaster. Meanwhile, Cuba has been living for 60 years under the impact of an obsolete and failed policy. It is hard for us to not think about where we would be today if the new blockade at the time had been ended as part of the deal for removing the missiles.