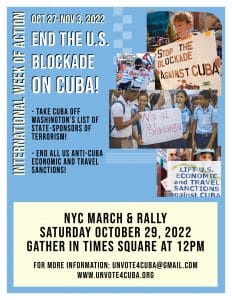 On Nov. 3, the United Nations General Assembly will vote YES for ending the U.S. economic, commercial and financial blockade of Cuba. Since the resolution was first introduced in 1992, 30 years ago, the global community of 193 countries has rejected the U.S. asphyxiation, maximum-pressure regime-change economic war waged against Cuba, its government, and its 11 million people.

Not surprisingly, the U.S. is expected to once again vote “no” along with apartheid-state Israel. Only once, in 2016 during President Obama’s last term, did the U.S. abstain, making the total 191 in favor of and none opposed to ending the blockade of Cuba. Cheers rang out, breaking the UN’s decorum.

The U.S. insists on maintaining the unilateral economic war against its much smaller island neighbor to quash its rebelliousness by starving the Cuban people through “adroit and inconspicuous” methods as planned in the April 6, 1960, State Department Mallory-Rubottom memo. However, much has changed in the 30 years since 1992.

First, Senator Marco Rubio, representing a small pro-blockade coterie in Congress, can no longer claim he speaks for Cuban Americans. Thirty years ago, Miami was a dangerous place for supporters of the Cuban Revolution and a center of struggle over Cuban parental rights for six-year-old Elian Gonzalez. In 1998 Miami was the site of the arrest of the Cuban 5 heroes, with screaming headlines falsely maligning them as Cuban spies.

For the past two years, however, on the last Sunday of every month, a movement led by Cuban Americans calls for the U.S. blockade to end and instead build bridges of love, “Puentes de Amor.” The car and bike caravans rally and drive through Miami streets, even down Calle Ocho, the iconic center of Cuban Miami. Into the third year, it continues. These activities are replicated throughout the Cuban diaspora and in cities across the U.S. and Canada.

Highlighting this development, Cuban Americans plan to lead a rally and march to the U.S. Mission to the United Nations in New York City on October 29, the Saturday before the upcoming debate on Nov. 2 and vote on Nov. 3. The demands of the march are: End the blockade, remove Cuba from the State Department’s arbitrary list of “State Sponsors of Terrorism,” and end all U.S. anti-Cuba economic and travel sanctions.

The people of the U.S. vote YES!

Yet when Biden’s administration votes against Cuba’s resolution on Nov. 3, the United States government will falsely claim to represent the people of the U.S. This is no longer true. More than 41 million U.S. residents voted YES to end the blockade through resolutions from elected city councils, county commissions, state legislatures, school boards and labor organizations.

A new round of resolutions will specifically call for the State Department and president to remove Cuba from the spurious List of State Sponsors of Terrorism. Cuba has been the target, not the sponsor, of terrorism organized in and by the United States since its 1959 revolution. The reality is that Cuba sponsors international literacy and health care, as shown from Haiti fighting cholera to Liberia fighting Ebola, to COVID-19 Henry Reeve Brigades in more than 50 countries. In the words of Cuba’s national hero, Jose Marti, Cuba acts with all for the good of all.

Support for revolutionary Cuba’s road, independent of the U.S. “backyard” or the Monroe Doctrine claiming all of the Americas for the settler-colonial U.S., is shown in the generosity of contributors in the U.S. When Cuba developed its own effective vaccines despite the U.S. measures blocking raw materials and syringes, hundreds of thousands of dollars were collected to send six million syringes. Every dollar and every syringe was a U.S. vote for ending the U.S. blockade. Cuba’s accomplishment is undeniable and measurable.

Look at this table of vaccination rates. Compare Cuba with Haiti. 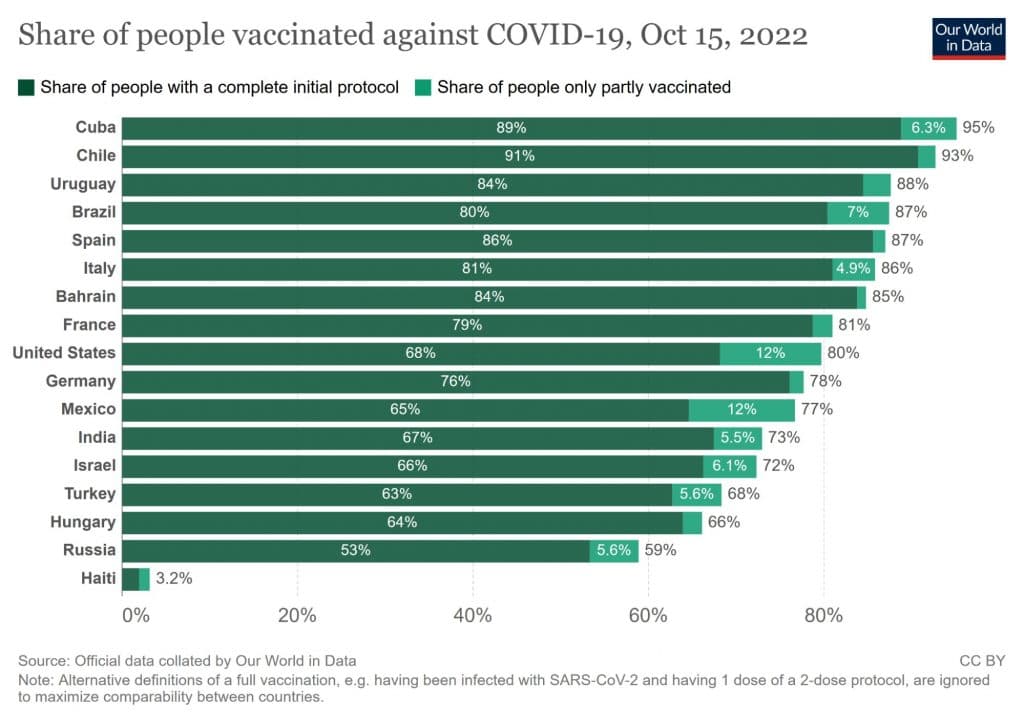 As directed in the 1960 Mallory-Rubottom State Department memo, the U.S. war on Cuba is “adroit and inconspicuous.” In the era of fake news, manipulation of images and social media bots, the U.S. war machine employs powerful media tools to obscure the truth about many developments, including Cuba. Going to Cuba, seeing and experiencing it personally, and meeting Cuban people is an important way to learn. But for those of us who have traveled to Cuba and live in the United States, it is our responsibility to act and not stop until the U.S. government fully normalizes respectful relations with Cuba.