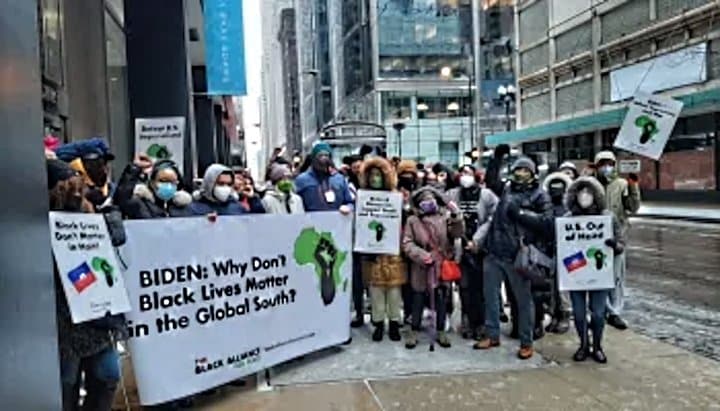 OCTOBER 7, 2022 — The Haitian people have been protesting for months against ongoing foreign occupation and U.S. support for a corrupt government that was not elected by a popular vote or mandate. In the last weeks, popular protests and uprisings have intensified, but the U.S. and its allies have responded by claiming all the disruption in the country amounts to “gang violence” that needs to be quelled with increased foreign intervention, on top of the ongoing BINUH occupation. In addition to the ongoing UN occupation, nine thousand Dominican soldiers are stationed on the border with Haiti and videos have recently surfaced of Dominican military forces entering Haitian territory. Given the Dominican Republic’s history of anti-Haitian sentiment and violence, this is particularly concerning.

Responding to these circumstances, on September 30, The Black Alliance for Peace delivered an open letter to CARICOM (the Caribbean Community), urging the 11-nation group to support Haitian sovereignty and oppose further calls for foreign intervention. BAP reminded the leaders of CARICOM that the situation in Haiti could not be reduced to a sensationalist assertion that so-called gangs were behind the popular uprisings on the island:

“The latest demonstrations are a direct result of two factors. First, they are a response to the everyday economic misery caused by rising inflation, especially through the staggering increase in the price of fuel. Second, they are part of a long history of demands for the end of foreign meddling in Haitian affairs, especially via the installation and maintenance of an unelected and illegitimate government by the Core Group, of which the United Nations is a part.”

BAP urges popular mobilization against continued U.S. intervention in Haiti and in support of Haitian sovereignty. This Sunday, October 9 at 4 p.m. EST in Washington, DC, leaders from 87+ Haitian-American, faith, and human rights organizations will convene at Black Lives Matter Plaza and march to the White House “to demand the Biden Administration stop propping up a corrupt regime that has plunged Haiti into chaos, and to let Haitians decide their own future, including creating a legitimate Haitian-led transition back to democracy and security”. We encourage all who can to show up and support the Haitian people to decide their own future.

The Black Alliance for Peace has been consistent. The crisis of Haitian democracy is the result of the colonialist interventions of the U.S. and other Western powers. As we said in our communication with CARICOM:

“BAP absolutely stands against any foreign armed intervention in Haiti, and continues to demand an end to the unending meddling in Haitian affairs by the United States and Western powers. We call for the dissolution of the imperialist Core Group, an end to Western support for the unelected and unaccountable puppet government of Ariel Henry, and for the respect of Haitian sovereignty.”

We say No to Occupation. Yes to Self-Determination.