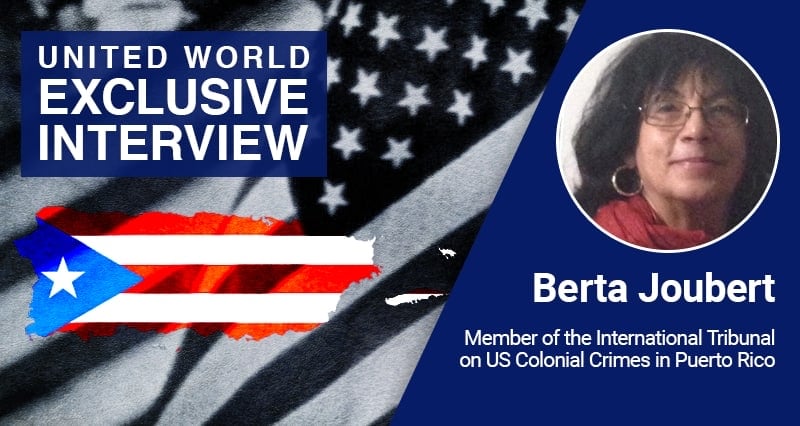 U.S. President Joseph Biden visited the Caribbean island of Puerto Rico on October 4 to examine the damage caused by hurricane Fiona. He promised all help to the island, which is a so-called “unincorporated organized territory of the U.S. with local self-government”.

Two weeks after the hurricane passed, the main energy provider LUMA energy reported that 120.000 homes were still without electricity.

But Berta Joubert, Member of the Organizing Committee of the Tribunal of Colonial Crimes of United States in Puerto Rico blames in interview with UWI LUMA and Washington’s policies behind it for the failure to struggle against damages caused by the hurricane. Joubert says the providers’ failure is part of the U.S. project to depopulate the island.

We spoke with Berta Joubert in Mexico City.

How is the current situation in Puerto Rico?

In Puerto Rico, we are in the middle of losing the country. Our country is being destroyed, not only politically by physically. A week ago, a hurricane of only category one passed through our country, exposing all the colonial crimes committed against Puerto Rico. All the inefficiency and cruelty of both, the local government and the United States became obvious.

They had installed a Supervision Agency, which we consider an agency of control, because it controls our entire economy, our lives and our income. This agency is taking away our money, is cancelling our essential basic services. They do not even recognize what our social basic services are. They are cancelling the budget of these services.

One of these is the electricity. They have imposed the privatization of energy and electricity, transferring the production and distribution to a mafiatic company. The company’s name is LUMA Energy, but in Puerto Rico, we call it Lumafia.

This company, which started operations in 2021, is robbing the Puerto Ricans’ money, while not working efficiently. They employ people who do not know our geography, our conditions, because they do not want to work with employees organized in our very strong local trade union. The company has laid off all these experienced workers, because it would not want to fulfill the agreed contract.

Now, the company has not enough workers to deliver the services in the energy sector. We have a mountainous island, but they brought from abroad people not experienced with this terrain.

They are responsible for the distribution and transmission of electricity. And they failed completely. Since they have started operations, we have had 7 complete blackouts, and 7 increases of electricity prices. Right now, hey have announced another increase. On paper, this is a public-private company, but the private side has not invested one cent. All the investment for operating costs comes from here.

Are the blackouts and lack of investment simply a result of mismanagement?

We have a national hero: Pedro Albizu Campos. He has spent almost all his life due the prosecution against the movement for independence. And Campos used to say: ‘The Yankees want the cage, but not the birds’.

People used to say that this evaluation constituted a conspiracy theory. But now, they see how the policies of the government, accounted for by the United States, suffocate the people in such a manner that they are forced to leave Puerto Rico.

One example is the following: They have privatized the health services, and now, people have to wait 6 months or even a year for medical assistance, because there are no doctors anymore. And hence, the people had to leave the country and get assistance elsewhere.

The emigration is a huge and imminent danger for Puerto Rico. This constitutes a brain drain for the country. People are forced to leave in order to get education for their children or basic medical services.

Currently, the referenda in the eastern parts of Ukraine are much discussed in international politics. Have you as a movement struggling for Puerto Rico’s independence demanded a referendum as well?

We as a movement for the independence of Puerto Rico demand that they, the U.S. and their representatives all get out of our country. That’s it. Those who demand a referendum here are the ones who want to be state within the U.S..

Those that did not want to be a colony anymore organized the last referendum. But that referendum had no effect. The results were only paper, they had no concrete results or effects. And currently, both the United Nations and the international community recognize that Puerto Rico is still a colony of the United States.