NEW YORK CITY — Filipino pro-democracy activists denounce the security and police violence and arrests that occurred during a protest against Philippine President Ferdinand “Bongbong” Marcos, Jr. on Friday, September 23rd, where the New York City Police Department (NYPD) arrested three activists now known as the Makibeki NYC 3. Makibeki is a slang term used by LGBTQ Filipino activists that derives from the Filipino word “makibaka,” which means “dare to struggle.” All three activists who were arrested are non-binary transgender people.

The Friday protest, organized by BAYAN USA, was the last of a week-long series of actions condemning Marcos’s visit to the United States. Marcos’s trip coincided with the 50th anniversary of his father Ferdinand Marcos, Sr.’s declaration of martial law in the Philippines. The demonstration included a sit-in at the entrance of the Asia Society auditorium, where Marcos was invited to speak despite the stern disapproval of hundreds of Filipino and Asian American writers and artists, followed by a program outside the Asia Society building. 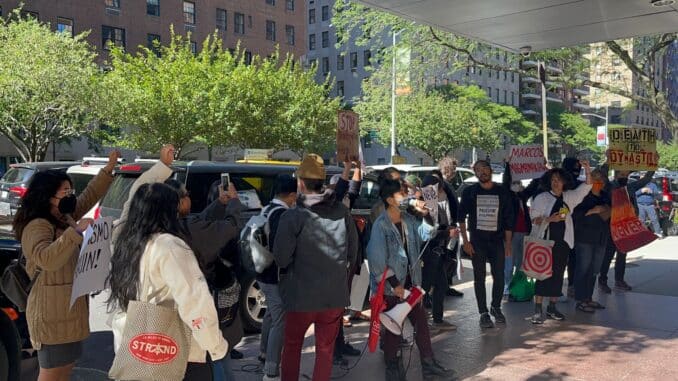 “We wanted to remind Marcos Jr. that we will never forget the crimes of his family,” stated Berna Ellorin of BAYAN USA. “The blood of those who died, either from the military and police or from debt and poverty, are on his and his family’s hands. We will never cease until there is justice and accountability for the over 100,000 victims of martial law.”

While conducting the sit-in, eleven demonstrators held a banner reading “Hold Marcos-Duterte Accountable – No to Fascist Dynasties” and chanted “Never Forget, Never Again, Never Again to Martial Law.” Asia Society security guards responded by aggressively dragging the demonstrators – most of whom were young women, queer, and transgender folks – one by one from the floor of the basement and throwing them forcefully into an elevator, onto the floor, and out of the front entrance onto the sidewalk. The guards grabbed demonstrators by their hair and limbs, in some cases so forcefully that they removed and/or damaged articles of clothing. Protestors were threatened with further violence, with one security guard stating he would break the activists’ arms, if they did not cooperate.

Several activists met Marcos’ motorcade as it left the Asia Society at the intersection of 70th St. and Lexington Ave with placards chanting, “Inutang na dugo ng pasistang rehimen, singilin, singilin, pagbayarin! (The blood debts of the fascist regime must be paid!)” One person was tackled by presumed agents of the Diplomatic Security Service (DSS). According to police reports, they were subsequently taken into police custody for having allegedly thrown a “red substance” at Marcos’s motorcade.

Following this arrest, the remaining group of activists questioned the DSS agents and NYPD, “Why do you protect fascists? Why aren’t you protecting the people?” Instead of de-escalating the crowd, a mob of DSS agents attacked the activists by pushing people to the ground, yanking people by the limbs and hair, and ultimately dragging two others from the crowd and arresting them as well. In the face of this physically aggressive response from law enforcement, community safety marshalls from the activists’ contingent stepped in to protect the people. More than a dozen people suffered physical injuries as a result of the attack.

The Makibeki NYC 3 were arrested, taken into police custody, and held overnight for over 24 hours, during which they were constantly misgendered by law enforcement agents. Collective action from BAYAN members and supporters ensured that the Makibeki NYC 3 were released as swiftly as possible the following evening on their own recognizance. “All of them work in service of our society as a scientist, a nurse, and an immigration lawyer respectively,” said Amanda Katapang, lead organizer for jail and court support. “They will go back to serving and supporting their community while they continue to fight their case.”

“BAYAN USA condemns the arrests of the Makibeki NYC 3,” said Ellorin. “Activism is not a crime. Exerting our democratic rights to genuine change should not be punished.” BAYAN USA calls for all charges against the three to be dropped. 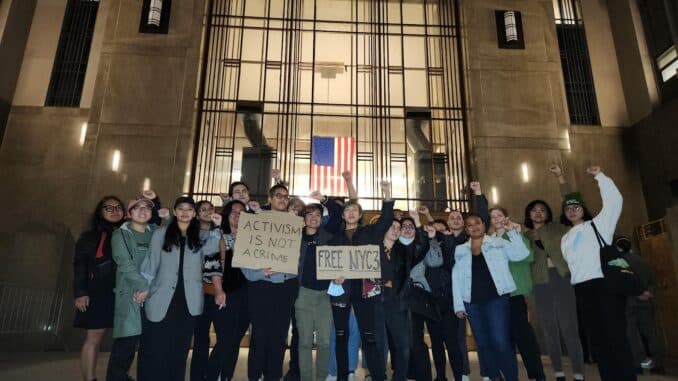