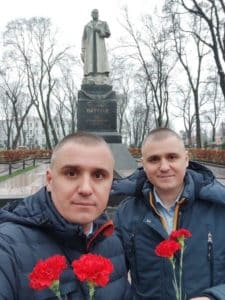 Based on remarks given at “Free the Kononovich Brothers: International Campaign Meeting” on Aug. 25. Mikhail and Alexander Kononovich are leaders of the Leninist Communist Youth Union of Ukraine. They were among hundreds of political opponents of the Ukrainian regime jailed this year, and thousands since the 2014 U.S.-backed coup.

That hypocrisy he exposes is very similar to those human rights advocates who selectively allege atrocities by any enemy of U.S. imperialism, but fail to mention a word about Israeli genocide against the Palestinian people, funded by the U.S., or the bombing of Somalia by the U.S. Not a care for those people, nor the political prisoners in the U.S. like Indigenous leader Leonard Peltier or Mumia Abu-Jamal.

Many of these political prisoners in the U.S., like the Kononovich brothers, endure daily torture and are there simply because they challenged the imperialist policies of the U.S. creating war, racism and poverty.

Almost all prisoners in the U.S. are political prisoners. Most wound up there due to economic desperation caused by capitalism and others for their political activism which threatens the hold of the capitalist ruling class over our working class.

And like the Kononovich brothers, they also face torture.

The United Nations states that solitary confinement for more than 13 days constitutes torture and is a violation of international law.

Almost 50,000 prisoners are being held in prolonged solitary confinement in U.S. prisons. They remain in cells the size of parking spaces. Six thousand prisoners were in isolation for over a year, and 1,000 of those have been in solitary confinement without the touch, smell or conversation with another human being for a decade or longer.

Where are the human rights advocates who so conveniently use their criticism against the latest country targeted by U.S. imperialism, yet never say a word about this torture and racism faced by so many in the U.S.?

There’s much talk by those so-called human rights advocates about the lack of democracy, they say, in Russia and China. The timing of those attacks against those countries also conveniently aligns with the U.S. drive towards World War III, using Ukraine and Taiwan as proxies.

Well, let’s talk about democracy as it relates to the situation with the Kononovich brothers’ imprisonment. How many in Ukraine are being imprisoned simply for being socialist or communist and how large has the prison population grown there? These human rights hypocrites do not inquire about that.

USA, a prison house of nations

The U.S. is supposed to be the greatest democracy, so its prison population must be the smallest – correct?

The fact is that the percentage of those in prison in the U.S. is five times the rate of that in China and twice the rate in Russia. It’s actually the highest number in the world, in both percentage of population and actual numbers – some 2.1 million in 2020.

Just as the budgets for Ukrainian security and military forces like the Security Service of Ukraine (SBU) have increased exponentially due to U.S. aid, in the last 40 years police budgets in the U.S. have tripled and they are also the recipients of military weaponry, including artillery, to be used against local communities.

And, as in Ukraine today, who is targeted for incarceration in the U.S. is a reflection of the ideology of fascism and white supremacy.

This increased rate of incarceration was also driven by the lucrative contracts for private prisons, which incentivize judges to pass longer sentences and whose Wall Street stocks are seen as good investments.

The war in Ukraine is also driven by U.S. imperialism’s insatiable appetite for profit.

In just the first three months of 2022, the five biggest oil companies made $35 billion in profits.

U.S. imperialism is profiting off of the war, especially the private military contractors like Lockheed Martin.

In the May 2022 aid package for Ukraine, up to $20 billion was made available for U.S. weapons manufacturers.

How did that happen? Well, while the Congress was debating this package in April, military supplier Lockheed sent over $200,000 in donations, right then, to 150 members of Congress.

But before that happens, people will, and are, beginning to revolt.

The economic situation for the people of Ukraine follows this path of an economy being sacrificed for oligarchs and the needs of U.S. imperialism. This requires repression by the ruling class to keep people from fighting back.

That’s why the U.S. began supporting Nazis in Ukraine even before the Euromaiden coup in 2014 – to prepare the extralegal military forces.

The SBU kidnaps and assaults leftists in Ukraine with the participation of the Nazi Avov Battalion.

The FBI and federal government collude with white supremacist groups by refusing to put them on the terrorist list, which could effectively shut down their activity in the U.S. Like the Ukrainian Nazis who are being paid well with U.S. weaponry, training and dollars, the U.S. is building its reserve extra-judicial army to meet the resistance of people in this country, who are getting extremely frustrated by the lack of food, gas, healthcare and housing they can afford.

The latest increase in the military aid to Ukraine that was announced yesterday – a $3-billion package that will push total U.S. aid well past the annual budgets of at least eight federal programs, including the entire judicial branch – exacerbates their desperation and poverty.

Working people of Europe are also frustrated as they watch their economic conditions deteriorate further due to their government leaders’ allegiance to U.S. imperialism.

This is why international solidarity is so important. Our movement should use that justified frustration and its exposure of the bankruptcy of aligning with U.S. imperialism. This exposure will help build solidarity with our international family of workers across the globe.

And we can use the example of the Kononovich brothers who, during one of their appearances at trial, wore shirts in solidarity with Cuba, which is also fighting the deadly sanctions and embargoes of U.S. imperialism.

This shows that we all have the same basic enemy – U.S. imperialism and its puppets in Europe and Ukraine – and we as a class, our working class, must come together and fight that enemy.

A big part of that battle is to build international solidarity for the Kononovich brothers. Every Ukrainian embassy in every country should hear our outrage. Every administrative building representing an imperialist country that is participating in this push towards WWIII should be protested until our brothers are released from the Nazi-hell that is now Ukraine.