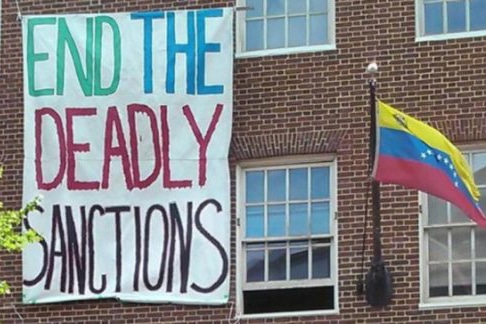 Unilateral sanctions – not approved by the UN Security Council – are illegal under international law. Besides contravening the UN Charter, unilateral sanctions inflict much human loss. Countless civilians – many far from target countries – are at risk, depriving them of much, even life itself.

Sanctions, embargos and blockades – ‘sold’ as non-violent alternatives to waging war by military means – economically isolate and punish targeted countries, supposedly to force them to acquiesce. But most sanctions hurt the innocent majority, much more than ruling elites.

Like laying siege on enemy settlements, sanctions are ‘weapons of mass starvation’. They “are silent killers. People die in their homes, nobody is counting”. The human costs are considerable and varied, but largely overlooked. Knowing they are mere collateral damage will not endear any victim to the sanctions’ ‘true purpose’.

The U.S. has imposed more sanctions, for longer periods, than any other nation. During 1990-2005, the U.S. imposed a third of sanctions regimes worldwide. These were inflicted on more than 1,000 entities or individuals yearly in 2016-20 – nearly 80% more than in 2008-15. Thus, the Trump administration raised the U.S. share of all sanctions to almost half!

Tens of millions of Afghans now face food insecurity, even starvation, as the U.S. has seized its US$9.5 billion central bank reserves. President Biden’s 11 February 2022 executive order gives half of this to 9/11 victims’ families, although no Afghan was ever found responsible for the atrocity.

Biden claims the rest will be for ‘humanitarian crises’, presumably as decided by the White House. But he remains silent about the countless victims of the U.S.’s two-decade long war in Afghanistan, where airstrikes alone killed at least 48,308 civilians.

Now, the U.S.-controlled World Bank and IMF both block access to financial resources for Afghanistan. The long U.S. war’s massive population displacement and physical destruction have made it much more vulnerable and foreign aid dependent.

The six decade-long U.S. trade embargo has cost Cuba at least U.S.$130 billion. It causes shortages of food, medicine and other essential items to this day. Meanwhile, Washington continues to ignore the UN General Assembly’s call to lift its blockade.

The U.S.-backed Israeli blockade of the densely populated Gaza Strip has inflicted at least U.S.$17 billion in losses. Besides denying Gaza’s population access to many imported supplies – including medicines – bombing and repression make life miserable for its besieged people.

Meanwhile, the U.S. supports the Saudi-led coalition’s war on Yemen with its continuing blockade of the poorest Arab nation. U.S. arms sales to Saudi Arabia and the United Arab Emirates have ensured the worst for Yemenis under siege.

Blocking essential goods – including food, fuel and medical supplies – has intensified the “world’s worst ongoing humanitarian crisis”. Meanwhile, “years of famine” – including “starving to death a Yemeni child every 75 seconds” – have been aggravated by the “largest cholera outbreak anywhere in history”.

Humanitarian disasters and destroying lives and livelihoods are excused as inevitable “collateral damage”. Acknowledging hundreds of thousands of Iraqi child deaths, due to U.S. sanctions after the 1991 invasion, an ex-U.S. Secretary of State deemed the price “worth it”.

Poverty levels in countries under U.S. sanctions are 3.8 percentage points higher, on average, than in other comparable countries. Such negative impacts rose with their duration, while unilateral and U.S. sanctions stood out as most effective

Clearly, the U.S. government has not hesitated to wage war by other means. Its recent sanctions threaten living costs worldwide, reversing progress everywhere, especially for the most vulnerable.

Yet, U.S.-led unilateral sanctions against Iran, Venezuela, North Korea and other countries have failed to achieve their purported objectives, namely, to change regimes, or at least, regime behaviour.

Although unilateral sanctions are not valid under the UN Charter, many U.S. reformers want Washington to “lead by example, overhaul U.S. sanctions, and ensure that sanctions are targeted, proportional, connected to discrete policy goals and reversible”.

Last year, the Biden administration began a comprehensive review of U.S. sanctions policies. It has promised to minimize their adverse humanitarian impacts, and even to consider allowing trade – on humanitarian grounds – with heavily sanctioned nations. But actual policy change has been wanting so far.

U.S. sanctions continue to ruin Iran’s economy and millions of livelihoods. Despite COVID-19 – which hit the nation early and hard – sanctions have continued, limiting access to imported goods and resources, including medicines.

A U.S. embargo has also blocked urgently needed humanitarian aid for North Korea. Similarly, U.S. actions have repeatedly blocked meeting the urgent needs of the many millions of vulnerable people in the country.

The Trump administration’s sanctions against Venezuela have deepened its massive income collapse, intensifying its food, health and economic crises. U.S. sanctions have targeted its oil industry, providing most of its export earnings.

Besides preventing Venezuela from accessing its funds in foreign banks and multilateral financial institutions, the U.S. has also blocked access to international financial markets. And instead of targeting individuals, U.S. sanctions punish the entire Venezuelan nation.

The U.S. has not spared Sputnik-V from sanctions, disrupting not only shipments from Russia, but also production elsewhere, e.g., in India and South Korea, which planned to produce 100 million doses monthly. Denying Russia use of the SWIFT international payments system makes it hard for others to buy them.

Economic sanctions – originally conceived a century ago to wage war by non-military means – are increasingly being used to force governments to conform. Sanctions are still portrayed as non-violent means to induce ‘rogue’ states to ‘behave’.

But this ignores its cruel paradox – supposedly avoiding war, sanctions lay siege, an ancient technique of war. Yet, despite all the harm caused, they typically fail to achieve their intended political objectives – as Nicholas Mulder documents in The Economic Weapon: The Rise of Sanctions as a Tool of Modern War.

As Cuba, Iran, Afghanistan and Venezuela were not major food or fertilizer exporters, their own populations have suffered most from the sanctions against them. But Russia, Ukraine and even Belarus are significant producers and exporters.

Hence, sanctions against Russia and Belarus have much wider international implications, especially for European fuel supplies. More ominously, they threaten food security not only now, but also in the future as fertilizer supplies are cut off.

As war increasingly crowds out international diplomacy, commitments to the UN Charter, multilateralism, peace and sustainable development are being drowned by their enemies, often invoking misleadingly similar rhetoric.