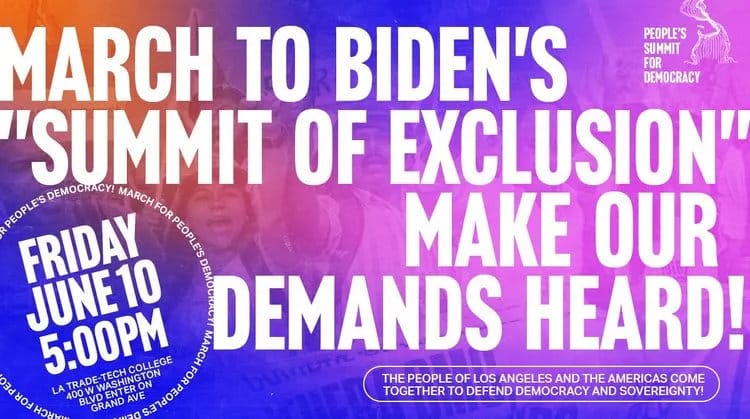 The United States insists on denying Cuba’s participation in the two most important political events to be held in the region this year: the Summit of the Americas and the People’s Summit for Democracy.

In early May, Foreign Minister Bruno Rodríguez Parrilla denounced that Washington had left the Caribbean island out of the initial preparations for the Summit of the Americas, which will take place in Los Angeles this week. Rodriguez also rejected The White House’s intentions to exclude Cuba, Venezuela, and Nicaragua from the continental event.

“The U.S. government is calling for a limited and exclusive Summit in Los Angeles due to the pressure put on it by the hemisphere’s far-right-wing. It excludes Cuba from discussions on issues that occupy an important place in the bilateral and regional relationship, such as migration,” the foreign affairs minister said.

Almost immediately, over 25 governments expressed their public discontent and demanded that all the countries of the Americas be invited. “Are Cuba, Venezuela, and Nicaragua part of another continent, another planet, another galaxy?” Mexican President Andres Manuel Lopez Obrador asked and asserted that he would not attend the meeting if all nations were not present.

Today, President Joe Biden, despite all his maneuvering, will have a very difficult time making a success of that Summit. He says he plans to address crucial issues such as migration, human rights, and democracy without the leaders of not only Cuba, Venezuela, and Nicaragua but also Honduras, Guatemala, Bolivia, among others. How can Biden turn around U.S. political relations with the hemisphere before an empty auditorium? Is Biden becoming the Emperor who has no clothes?

Parallel to this failing event, there will be the People’s Summit that is a promising coming together of now over 225 progressive groups from all over the US along with representatives of political organizations and leftist social movements from Latin America and the Caribbean. This gathering is taking place not that far away from Biden’s Summit at the Los Angeles Trade-Technical College and will be an important convergence of progressive forces who are emerging from the post covid quarantine with a sense of urgency. The convergence will take on June 8, 9, and 10 with plenaries, panels, workshops and musical performances culminating with a march to the Summit of the America’s location on the last day.

The thrust of the Peoples meeting is an effort to put the Americas on the same geopolitical path of regional co operation outside the clutches of the imperialism that was pushed in the era of Venezuelan President Hugo Chavez, Cuban leader Fidel Castro and other Latin America leaders.

However, Cuba will not be able to participate in this event either. Recently, the organizers of the Peoples’ Summit denounced that the U.S. government denied visas to the Cuban delegation that were invited and planning to attend this alternative meeting in Los Angeles.

This is an affront to the very democratic values that the U.S. government claims to defend, said the coordinators of the continental meeting.

“The policy of the U.S. government is cruel to the Cuban people and also to the people of the United States, who are denied the right not only to travel to the island but to be able to speak and dialogue directly with the Cuban people,” one of the coordinators of the summit and The People’s Forum director, Manolo De Los Santos, told the press.

Among the 23 people from Cuban civil society whose visas were denied by the US were renowned Cuban scientist and physician Tania Crombet Ramos, Olympic medalist Reineris Salas Perez, queer Christian student leader Jorge Gonzalez Nunez, and many others, including journalists, artists, trade unionists, and community leaders.

Joe Biden’s Summit of the Americas is marked by exclusion and the imposition of a political agenda the exact opposite of the parallel Summit that is striving for inclusiveness by bringing together diverse voices from across the Americas.

Despite the efforts coming from Washington Cuba will be represented because they have many friends who will defend Cuba and bring Cuba’s accomplishments despite, the over 60 year old blockade, to the Summit of the Americas and also to the Peoples Summit for Democracy.

The people of Cuba can be reassured that, “Cuba’s voice will be heard in the world, despite Washington’s efforts to prevent it,” as  Cuban President Miguel Díaz-Canel asserted.