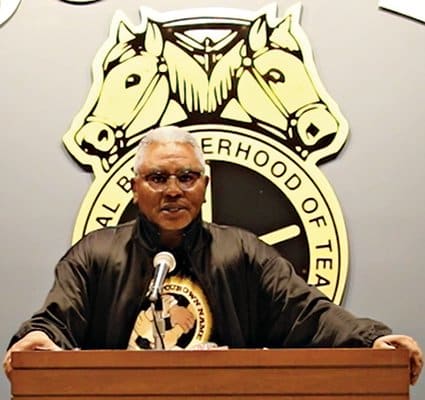 Clarence Thomas — labor organizer, retired member of International Longshore and Warehouse Union (ILWU) Local 10, leader of the Million Worker March Movement and author of the recently released “Mobilizing in our Own Name: Million Worker March” — spoke at Teamsters Joint Council 16 in New York City on May 14. Following are excerpts from his presentation.

Let me first say that I am glad to be here, on this part of a whirlwind book-signing tour. The Teamsters’ meeting is special and I’m going to get right into the reason why.

The Teamsters and Longshore Workers represent two of the strongest industrial unions in the nation, if not the world. We also share a radical rank-and-file militancy at the point of production.

Local leaders associated with the Communist League of America led the Minneapolis Teamsters Strike. The strike paved the way for the organization of over-the-road drivers and the Teamsters union.

Bloody Friday is the name of the event which occurred in Minneapolis, Minnesota, on July 20, 1934, when police shot at truck drivers who were flying pickets, injuring 67 picketers and killing strikers John Belor and Henry Ness. An investigation determined, “Police took direct aim at the pickets and fired to kill.”

When solidarity strikes protested the shooting, the governor declared martial law and deployed 4,000 troops. On July 24, over 100,000 people lined the streets of the route of the funeral procession for Henry Ness.

The strike was pivotal to Minneapolis’ strong union tradition and is seen as a critical moment for the Teamsters and the labor movement.

This outcome led to the enactment of legislation acknowledging the right of workers to organize.

July 5, 1934, marked a turning point in the West Coast waterfront strike. One of the demands was to end the shape-up, where each morning longshore workers would gather in front of the ferry landing in San Francisco to beg for jobs and to pay bribes to get a day’s work.

The union demanded the right to a worker-controlled hiring hall to end the shape-up and a six-hour workday so that work could be shared on the West Coast with their union brothers during the Great Depression.

On July 5, employers tried to open the San Francisco port with scab trucks escorted by the police at Pier 38. The police tear-gassed unarmed strikers. At least 100 strikers and their supporters were injured.

Howard Sperry, a longshoreman and a World War I veteran, and Nick Bordoise, a union cook and strike supporter, were both shot in the back and killed by plainclothes police officers outside the union headquarters. This date is known as Bloody Thursday. Teamsters had Bloody Friday; longshore workers had Bloody Thursday.

The following day, thousands of strikers’ families and sympathizers, including Teamsters, took part in a funeral procession down Market Street in San Francisco, stretching more than a mile and a half.

The city was paralyzed by a general strike. Six workers were shot or beaten to death on the West Coast by police or company goons during the strike, which lasted for 99 days.

These terrible events galvanized public support. Following Bloody Thursday, similar incidents up and down the coasts created a wave of rank-and-file unrest that conservative American Federation of Labor leaders were unable to stop.

This gives you some idea as to why our two respective unions are so strong. Brothers and sisters: this is our history and it is a hidden history.

One of the things I want to talk about is International Workers’ Day — known as May Day — which the Million Worker March Movement pledged to reclaim.

Many people think May Day is a communist holiday. Yes, it is. It is an official holiday in socialist countries. But it started here in the U.S.

We don’t grow up understanding the importance of labor solidarity, or that whether a person is Black, white, Latino, trans or straight, we are all working people. If you are unemployed, you still are a worker. That’s a common bond.

The history of the labor movement is hidden because we didn’t learn how we got the eight-hour workday.

In 1886, workers in Chicago who manufactured the McCormick reapers were in the forefront of the struggle for the eight-hour workday. Children and women worked under inhuman conditions, while they and the men worked 12, 14, 16 hours a day.

Workers all over the world stood to attention when four men were framed up for throwing dynamite at the police department in 1886 and martyred by a kangaroo court.

There is a common thread that runs through labor history. That it is the role of police who represent the bosses, the state and the privileged.

We must understand that history — and the role of the police department. Whenever we have a picket, when there is a labor beef, and the police come out, they aren’t in solidarity with us. They come out on the side of the bosses. That’s their job.

There is a reason why the government and big business did not want the working class to celebrate May Day. They gave us Labor Day. That has no connection to our struggle.

The reason why the Teamsters are who they are is because of the militant history that we share.

Class interests – theirs and ours

We are working-class people whose interests are separate from those of the Democratic Party and the Republican Party. Their interests are not the same as ours and I can prove it.

The bosses want to make it appear as if there is something criminal about a worker making six figures, but they applaud the likes of Jeff Bezos and Bill Gates. They say the Teamsters and the Longshore Workers make too much money because they figure that we should be making the same wages as they pay people in Walmart.

The Democratic and Republican parties are funded in the interests of the rich. If they had their way, there wouldn’t be any unions.

We did not get the eight-hour work day, pensions and vacations because the bosses loved us. We got that because people fought and died for that. There’s nothing wrong with us standing up for our own class interests.

We don’t have a labor party in this country. They have them in other countries. Have you ever thought about why? Because they want us to believe that our interests are synonymous with the Republican and Democratic parties.

Let’s look at that. People in other countries don’t have to pay for their children to go to college, because they believe that a nation that does not invest in the youth doesn’t have a future. A country that really serves everybody would not be one with tremendous examples of income inequality.

Why do we have homelessness and poverty? We must be very clear as working people that we have our own class interest and that is what led to the Million Worker March.

To learn more about the formation of the MWM, read Clarence Thomas’ entire presentation online or listen to his speech, go to MillionWorkerMarch.com. Struggle-La Lucha will be publishing more from his book tour.

From transcription by Gloria Verdieu.